Every year Steve Churchill travels from his Bristol home to Alderney accompanied by his father-in-law Graham. The competition between the family duo is fairly intense to say the least and their Alderney trips are a big focal point of their annual angling. Unfortunately this year Graham was taken ill at the last moment and was unable to come, a real shame as the flattie fishing so far has been good.

Steve had a quietish first couple of days but on day 3 Steve was on for the Alderney triple Slam, a Bass, a Turbot and a Brill. Having caught the But and a Bass in the morning session Steve concentrated on the Brill with live baits for the remainder of the day. Unfortunately the Brill evaded him. However on Day 4 on the first drift bang… you guessed it Steve caught a cracking Brill. Nice fish but Steve, you’ve got to do it in one day!

Obviously not too despondent though, Steve – a mechanic when he’s not fishing – resumed fishing with a few Turbots hitting the deck but none of his own. End of the day was nigh when Colin Dukes, the skipper of Smuggler, called the last drift of not just the day but the trip when Steve latched in to a very good fish on his mackerel bait. After a tentative scrap which lasted a full 10 minutes the fish was landed much to Steve’s relief. When weighed it dropped the scales to 25lb 12oz, a fabulous fish and reward for all Steve’s time he has spent here, and of course Graham whom had sadly missed out, but not fully. Before you could bat an eyelid Graham had received the news and pictures were duly sent with a ‘get well message’! 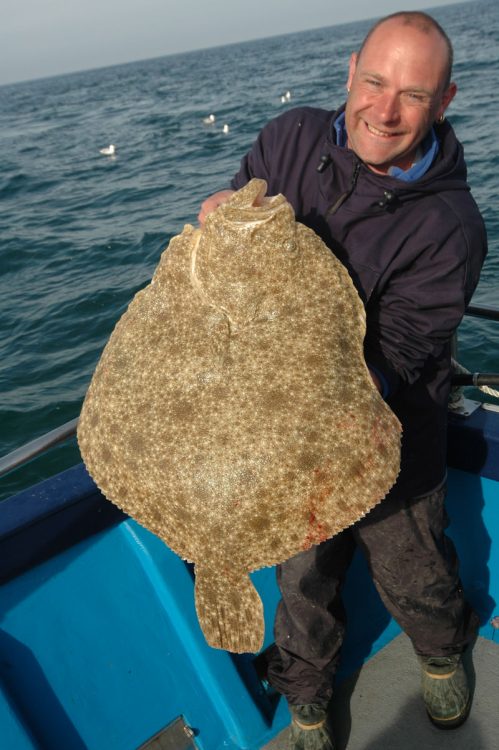