In this concluding part of Planet Sea Fishing’s three-part white ragworm exposé, Steve Souter takes a look at species application, reveals some of the best whites cocktails, and deals with how to transport the bait to fishing venues

Despite time exhausted acquiring your white ragworm and pains keeping them in top condition, returns in fish terms can be a massive anti-climax if some serious thought is not applied to bait presentation. Yes, there are instances when fish will chomp any ‘banged up’ old white, and a crudely impaled worm suffices. But in the bigger picture, there’s more to it if you want to catch consistently. Smaller species such as flounder, rockling and blennies can’t resist whites, while cod, plaice, pout, whiting, dogfish, dab, school bass, and smaller structure-hugging pollack are willing takers. Generally speaking, those species known to grab a white from the shore will snap them up from the boat with the same relish. 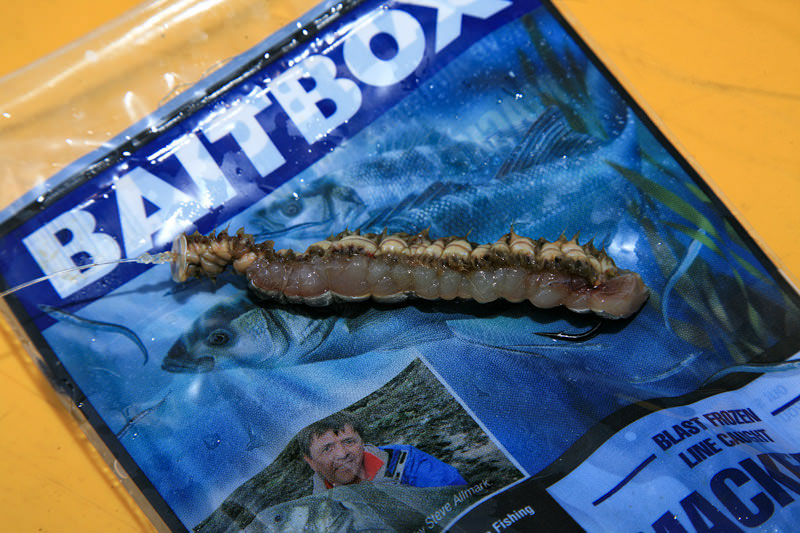 Few boat anglers go to the trouble of acquiring and carrying white ragworms, but the effort can sometimes pay off spectacularly. My loose rule of thumb for boat fishing is anything that will eat a red ragworm, will devour a white in double-quick time. That would include codling, wrasse, pout and flatfish (particularly plaice), to name but a few species. Aside from the ordinary, I have caught ling, wolf fish and good numbers of black bream on whites. 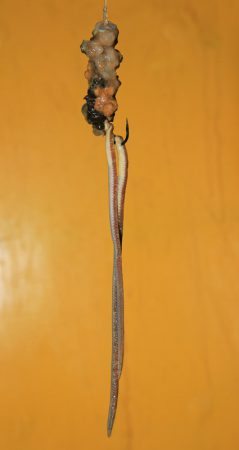 There are recognised times when whites score heavily against other baits, but fish don’t read magazines and there are no cast iron rules. Cod go crackers for whites. Larger whiteworms cocktailed with black lug, blow lug or peeler crab can be wonderful from mid autumn right through the winter for cod. But it is very wrong to suggest that they won’t score heavily at other times. Through March and April many shore anglers on the Lincolnshire coast for example, would feel absolutely naked and suffer poorer catches of spring codling if not for their faith in white rag.

Shore or boat, for returning spring species like plaice, they can be quite superb. During the countrywide post winter lull when it’s a case of ‘scratch to catch’, white rag fished solo, or with maddies are often small fish wonder baits. But whatever the time of year, think whites in bright weather and calm, clear water conditions. If the customary glance at the weather chart shows widely spaced isobars, indicating high pressure systems, I pack extra whites.

Regardless of tidal pull, white rag can be pressed into effective service from the shore. Afloat however, whether at anchor or drifting, whites score best during dull tides. With the possible exception of bank fishing for plaice, the effectiveness of whites from a drifting boat is nullified given a fierce tide.

Like all baits, there are several different ways to present whites and myriad cocktail possibilities. Whites are both a visual and scent-charged bait. Whole bigger snakes and pungent worm sections, which leak a tacky gelatinous fluid, catch well in most conditions including heavily coloured water. Once punctured, the body fluid of smaller whites is inky black, while the biggest pearly whites contain a sticky brown fluid not unlike rust/orange peeler crab mush in constitution.

When the sea is well coloured, I will sometimes deliberately perforate a white by jabbing it several times with the hook point before threading it on; thus letting the flavour flood out. Head-hooked whites wriggle like hell. The writhing tail movement is another attractive attribute that that flounders and rockling find irresistible.

Bunches of wriggly head-hooked whites come to the fore in settled sea conditions when you have to work hard for bites. At times whites can be devastating on their own, but they are more commonly regarded as a tipping, or combination bait. Being white or nearly white in colour, they are very visible in clear water, offering a superb colour contrast when tipping lug. Many top anglers believe garnishing the point of a base worm or shellfish bait with a ‘white flag’, encourages fish to find the hook by giving them an aiming spot. 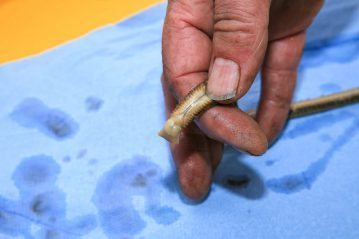 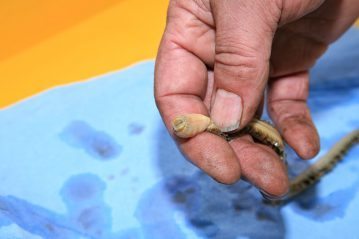 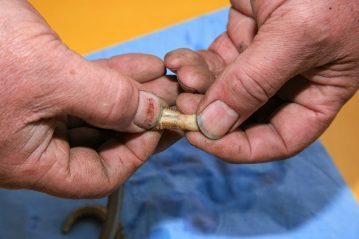 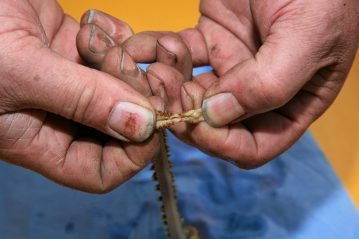 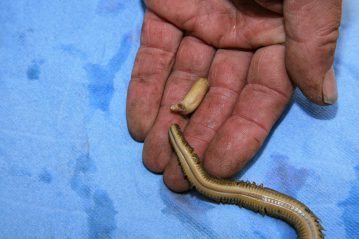 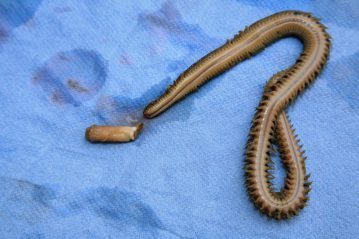 For threading white worms up the line, it’s fine to squeeze out and nip off the hard feeding bulb (see left-to-right picture sequence above). However, leave the bulb in when head-pinning worms that you want to wriggle. Putting the hook through the hard bulb offers a little security when short casting with flapping rigs.

Ripening whites in the early stages of deterioration can be very good for dabs and dogfish, while codling sometimes show a distinct preference for them. Big whites on their last legs also make reasonable dab baits when salted and frozen down. First put ailing worms in a dry tray and generously cover them with ordinary table salt. Rub the worms in the salt making sure they are fully dressed. Next wrap worms individually in newspaper and place straight in the freezer. 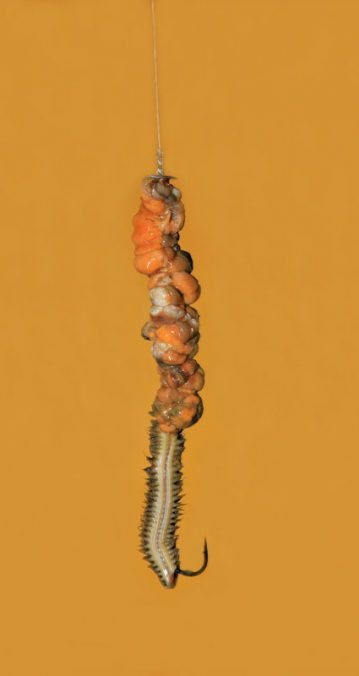 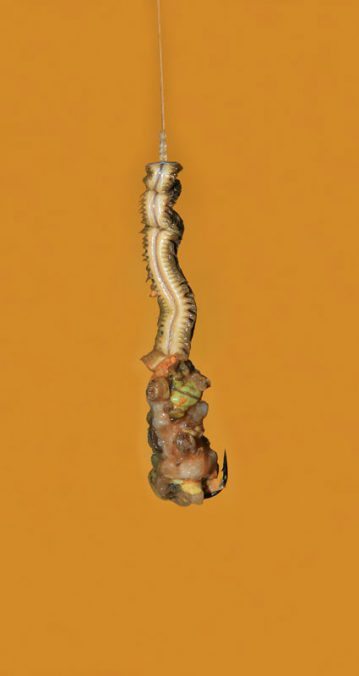 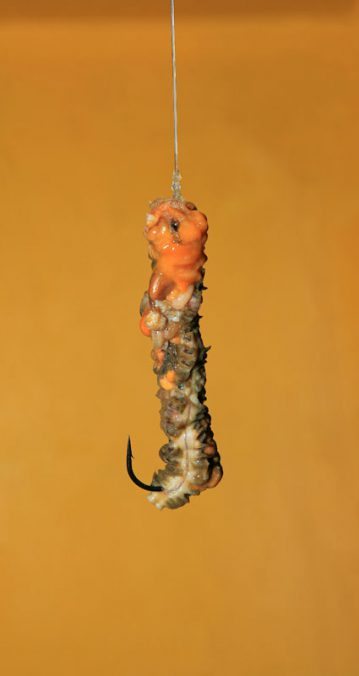 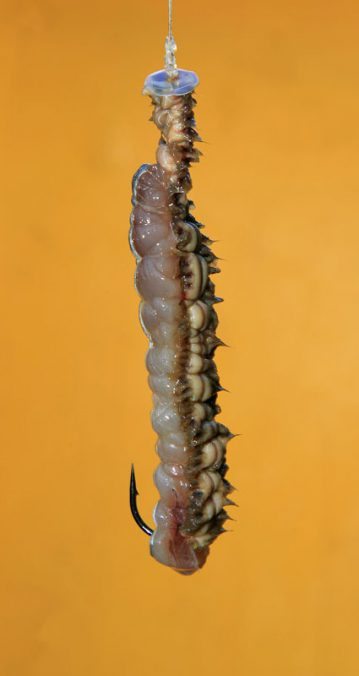 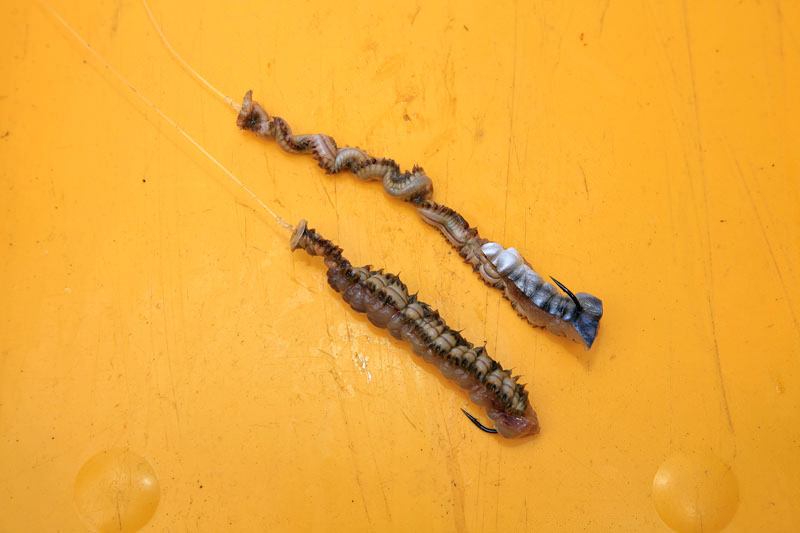 It’s important to ensure that baits reach the beach or boat in excellent condition. The transition of bait from fridge to fishing mark is very often hurried in the clamour to get fishing and a potentially huge pitfall. Laziness equates to dead worms, and whites are too scarce to knowingly neglect. With a just little attention your whites will arrive in first class condition, and any later unused worms can be returned to the fridge for use another time.

To transport whites effectively you need a few ice cream tubs or Tupperware style containers with secure lids, several freeze blocks and a ready supply of fresh chilled seawater. Although a simple bucket with lid will do if fishing close to home in winter, a good cool box is essential for travelling long distances and to beat the biggest killers of worms – heat and summer sunshine.

The best cool boxes are those with thick-sided walls plugged with a generous amount of insulation. Cheap, thin-walled cool boxes are no more efficient than a basic bucket, so choose carefully. The best tubs are fairly shallow, allowing them to be stacked four or five high to make maximum use of the available space. Try to avoid the brittle type of plastic tubs that are prone to splitting when stacked on top of each other. 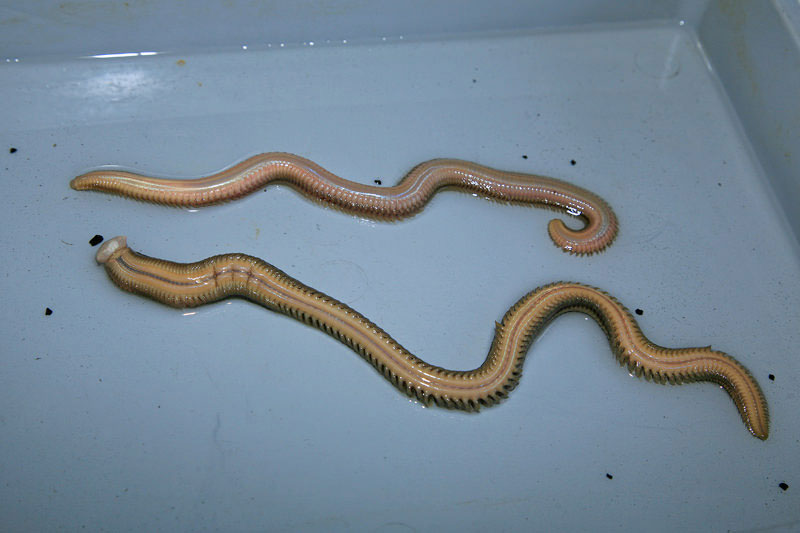 The easiest way to transport whites is in water. Now it might be my OCD at work, but I firmly believe that whites travel and survive better if placed the correct way up. Upside down whites can become agitated and are inclined to bite chunks out of each other. The same applies to worms tanked in the fridge.

Cool air falls; therefore it is important to lay freezer blocks at the top of the box before closing it. However, I like to put a few blocks top-and-bottom, with a couple of extra ones squeezed down the sides for good measure. Place a layer of cool blocks in the base of the box, then stack tubs of worms on top. Ideally, you should be able to lay two groups of tubs side by side comfortably. To stall freeze blocks from defrosting and prolong the desired temperature for as long as possible, wrap them in double sheets of newspaper. Also fill in the cool box dead spaces with crumpled newspaper, or loose polystyrene packing material. Another tip is to fully tape the seam around the lid with packing tape. A word of warning though, I normally only go to these extremes when faced with a long haul in summer because its possible to accidentally pull the temperature down to the extent that you actually freeze the seawater and kill the bait.

Another trick is to float a small cool pack inside your tubs, but make sure the freeze block is of the sealed variety, as the others have a nasty habit of leaking liquid that quickly kills worms. A good source for cheap or even free cool packs is the nearest florist. Large numbers of cool blocks are widely used in the transportation of flowers in summer. Around May, most florists are drowning in the damn things and often only too glad to get rid. 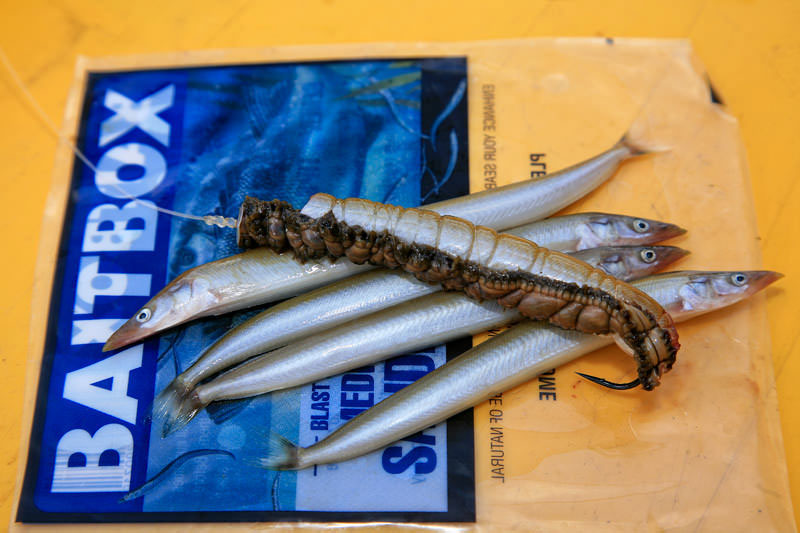 Whites in water suffer no ill effects in a sealed tub with an apparent lack of air. Tubs can be stacked inside one and other with a lid sealing the top one only. However, sloshing leads to unavoidable leakage and I prefer to lose a little space and fasten lids to all tubs. For travelling short distances, worms only need to be covered with a small amount of water.

The downside to transporting large quantities of white ragworm in water with a pile of freeze blocks is weight. And I have seen plenty exploding cool box handles in my time. Most cool boxes are not designed to take excessive weight and inadequate handles should be replaced with a secure alternative that won’t burst when you least need, or expect it – normally halfway along a two-mile trek to a favourite beach mark, or while passing gear down a high quayside ladder straight onto someone’s unprotected head! Fork-damaged whites are afforded minimal space and can be carried easily in damp newspaper that has been lightly sprayed with cold seawater. These simple cool box tips can be applied to all sea baits in transit.

Land of the Giants