An early trip out of Whitby hunting for porbeagles proved productive for Rupert Drury and his mates. An early start at 5am saw the guys welcomed on board Shy Torque by skipper Rich Ward and his crewman John Wilcox.

Mackerel proved scarce to start with but after dropping anchor enough were secured to set up a decent rubby trail. With some of the guys fishing for ground fish it wasn’t until 11:30 that the first indication of shark action was signalled by the sound of a clicking ratchet. Allowing the fish to take 25 yards of line Rupert set the hook and the fight was on. After a fight of over 30 minutes, during which time all the anglers on board experianced the thrill and power of a hooked porgie, the fish was boated.

After tagging and measuring the shark was safely returned. 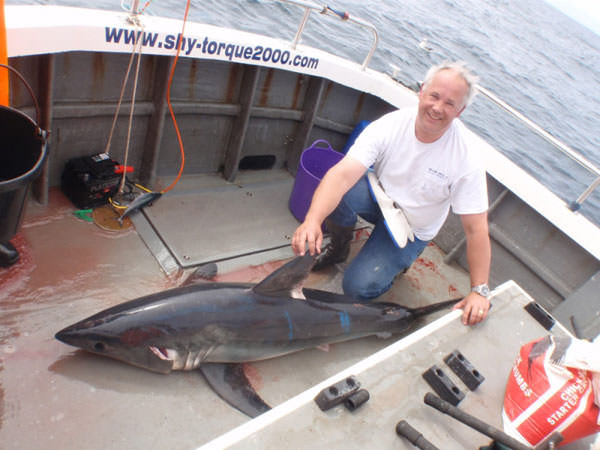 With half an hour of the alloted fishing time to go an second shark chomped one of the makerel baits in half before returning to the side of the boat 20 minutes later. The crew had a great view of the porbeagle swimming by and just as they thought the chance of a second hook up had gone it picked up Rupert’s bait which had been reeled in towards the boat.

Another hard fight and the second Whitby porbeagle was boated, measured and returned.

A great early season day out.

A video of the final part of the fight can be viewed here – https://www.youtube.com/watch?v=xn-9r-khISc