Well it has been a far better season so far for the illustrious turbot. Numbers have continued to show on the various banks around Alderney and not just the famous Schole and Casquets. They have been turning up on the smaller banks too which has been excellent news, however there has now been a slow down in numbers which is how it goes. The big flats have been around for a bit now and justified some of the anglers who did come this year after such a poor show last season. The best turbot in this reporting period came on board Clem Carters boat Wild Frontier caught by Daniel Rimmer, it went a magnificent 27lb 8oz!

Now though we await an improvement in brill numbers on the banks which normally happen around now and then we have a return of better numbers of turbot towards September but they are always there throughout the summer but not in the same quantities. Having said that I had one of the best days on my boat one foggy July with 26 flapping there way to the net, so you can never tell. One of the best brill lately came aboard Offshore Rebel skippered by Paul Whittle. 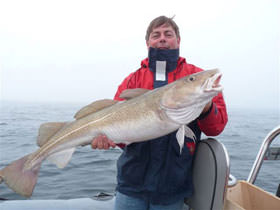 It is time now though to turn our attentions to the other species which are about and for my mind provide better sport if not better eating. Top of the list for sport is the tope. There have been plenty around of late with good sessions, which are short due to the nature of the tides here, seeing around 30 fish coming to the boat on one day. Live mackerel presented on 12/20 class rods provides exhilarating fun, in the main the tope run between 20lb to 45lb but some specimens around 50lb plus are often caught.

Bass are very slow to show which I believe is reciprocated throughout the English Channel at the western end. Why we do not know, we have got plenty of bait in the way of sandeel, launce and mackerel. It is likely to be just another cycle of life that we need to accept hopefully.

Black bream are just starting to arrive with a smattering of fish to 4lb 8oz. We catch these on the drift so we can fish light but on the smaller tides boats do throw the pick down. When anchored expect to catch a whole array of species on the same ground. conger and huss will snaffle even the tiniest of baits but fishing small and light means the gurnards, codling, couches bream, triggers, cuckoo and ballan wrasse and more can be caught. You never know but you may well fluke that turbot you couldn’t catch the day before, it happens often!

The harbour has fished well this last week before reporting. Several boats where the lads have slept aboard have seen bass to double figures, an early rise essential but what do you do first? Bait up or set the frying pan up to get that bacon crisped off!! Boats report up to five in a short session, bass that is not bacon butties, and the average is up round the 5/6lb. Big fish which fall to fresh mackerel baits or live eel. Not a bad start to the day before you set off to sea. One angler aboard Patient Pursuit even managed a 5lb plus mullet (of which there have been hoards shoaling) on a side of mackerel nailed to a penelled 5/0 rig! This bass was landed by local angler JC in just feet of water.

Wrecking has been spot on too, plenty of pollack to17lb reported and a good head of cod. I only managed one trip myself this month but the 6 cod we had were all doubles bar one and three were around 20lb. There are ling and conger about too on these marks.
Shore sport has been close to abysmal. However, as of this week there seems to be a light at the end of the tunnel. Plenty of mackerel around which has been good. Pollack showing in better numbers as are garfish. There are masses of wrasse around too if you want them. Bass have shown on the plugs as well but everything else is a bit slow. I wish someone had the nerve to put a bit of time in with the mullet I mentioned earlier. There have been a lot of fish around for the time of year and some huge fish in the shoals too.

Festival entrance forms will be going out soon. If you’re not on our list get in touch by phone on 01481 8248884 or email me mark@alderneyangling.com and we’ll get you on our mailing list. It is 17th to 25th October and is a fantastic week to be part of. Last year we did though have the Festivals worst year so we will be looking for a marked improvement this time around. Plenty of cash and prizes to be won, the format is based around Specimens it is as level a playing as it gets.