Michael Griffiths enjoyed an amazing trip out on his SIB from Cleveleys. He was into the mackerel straight away on small feathers, and it didn’t take long to get a bucket full for bait. He then anchored up and it was non stop action all day. 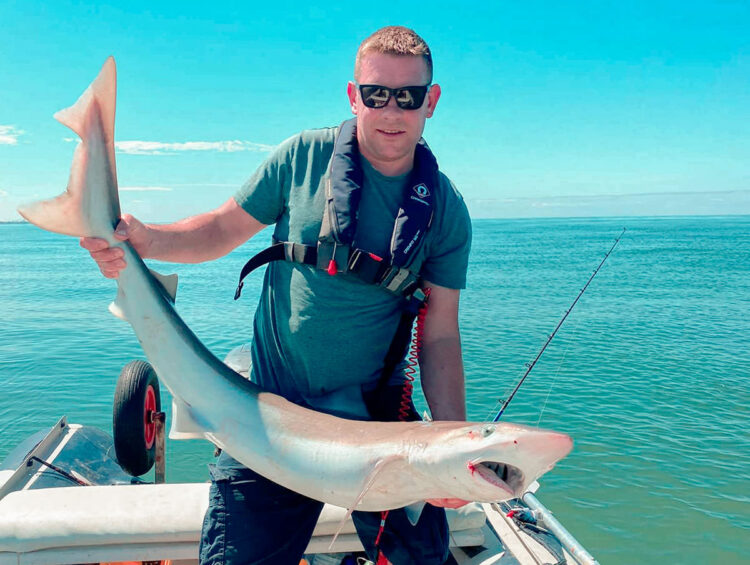 Michael with one of his tope

Dozens of Tope taking the mackerel baits and dozens of smoothies falling to squid and prawn baits! Unbelievable how many decent sized fish are out there less than a mile off shore.

Allan Cordwell the commencement of his tope season with a cheeky short five hour evening session aboard the Blue Mink along with good friend Bob Anderton. The session was an add on as the original plan was to commence an all out assault for tope from next week, however, after receiving an invite to join Mark Adam and friends Alan decided to use the session to refresh his approach and apply lessons learned from the previous limited season.

Sailing time was a very sociable 16:30 and the crew arrived early after picking up Bob from Hambleton which allowed them to partake in a nice stroll and ice cream.

We then met up with Mark and friends to board the Mink and it wasn’t long before the anglers were out drifting for bait. After a few drifts they had caught enough mackerel to last the session and they made our way to deeper water.

Once anchored, the lads commenced fishing and a full mackerel on an 8/0 to 150 nylon was dropped into the depths. First run and hook up was by the angler to Alan’s left and looked a very big fish, sadly, his hook snapped and the fish was lost at the boat side.

A few good huss showed and myself and Bob both falling victim to the dreaded bullhuss head shake and their amazing ability to spit the hook out, smile and swim away!

Halfway through the session Alan received a series of knocks and thinking it was a huss, he wound down and lifted the rod only to be pulled down savagely and have line taken from the reel. Unfortunately, the hook hold gave way and he lost contact with the fish.

One the anglers then hooked into a running fish. As agreed, the others wound in lines to keep a clear fighting area. It seemed the tope had come on the feed and after a short fight, a nice high twenty pound fish was landed. 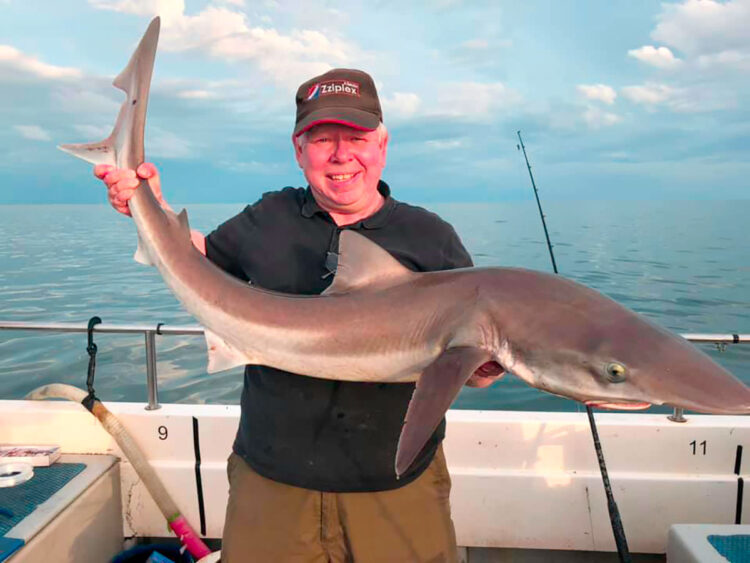 Alan kicks off his tope season

After checking the hook and trace, Alan re-baited and dropped the bait a little further from the boat. Almost immediately the tip pulled down, stopped, pulled down again, stopped and then tapped a few times but started moving off. He engaged the lever drag to fight setting, disengaged the ratchet, wound down and set the hook.

The rod arched over and battle commenced. The fish fought hard with intermittent fast runs with the Saltiga braid rod doing exactly what it was designed to do, fully absorbing all the lunges and head shakes the fish could throw at it.

Once boat-side , it was expertly brought on board by skipper Andy and duly measured for weight calculations which came to 31.8 lb. Once the obligatory pictures were completed, the fish was returned to the depths and rod re-baited and put back out.

Shortly after, Bob hooked and landed his first ever tope, not huge but it gave a good account of itself. Hopefully, the first of many to come for him.

All went quiet for a while with the stillness only broken by a small huss for me. All to soon, the session was over and we headed for shore.

A great session overall and a good start to Alan’s tope season. Thanks go to Mark for the invitation and to Skipper Andy for putting us onto the fish and his landing skills. Hopefully, more big fish next week! Tight lines all. 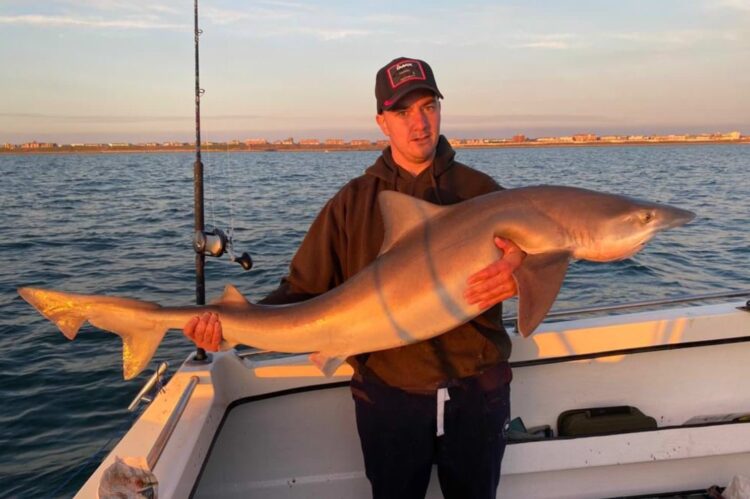 Fleetwood and District Angling Club fished their latest match at Five-Bar Gate and they were again blessed with great weather, a light breeze dropping off to nothing. The fishing over the last couple of days had been poor so any fish would be a bonus.

Twenty-one anglers fished and ten caught fish. Most of the fish caught were smoothhounds but Dave Hutchinson had a bass over 4 lb and a plaice in his winning bag. Ian Mawdesley had the best smoothhound which at 115 cm would about 12 lb.

Congratulations to all of the winners

The fish worth the most points was shared between David G Hutchinson Kevin Blundell and Ian Mawdesley with smoothhound worth 80 points wins £7 each.

Next week’s match is on Sunday at Five-Bar Gate over low water and fishing from 6.30 to 9.30pm.