Spring is definitely in the air this week! We have seen an unprecedented number of thornback ray in the Thames Estuary, with boat, beach and pier anglers having great sport with these heavyweight rays.

The charter boat Gloria B2 reported that plenty of fish are being caught with thornback rays in abundance. The private boats, when they have been able to launch. also have similar reports and by the end of this month those hard-fighting smooth hounds will be appearing around the Gunfleet Sands.

This week has seen the first of the school bass turn up in numbers for the shore fisherman and local angler Scott Baker headed down to the Walton beaches to fish at Burnthouse breakwater with his father. Scott landed four small bass and sizeable bass too, his father not to be outdone also caught an in size bass together with whiting.

My trip this week was to fish the midnight tide on Walton Pier in the search of a thornback ray and to be honest it was probably one of the best trips I have ever had. I fished whole squid baits off the top of the pier and from first cast to last saw a steady stream of rays up to the 10lb mark landed. I ended up just using one rod as the fishing was too hectic, I fished till 3am and then headed home for a well- earned sleep!

David Rowland also fished the pier this week and had an unusual catch in the form of a 2lb coalfish, and he also landed a couple of small codling too. 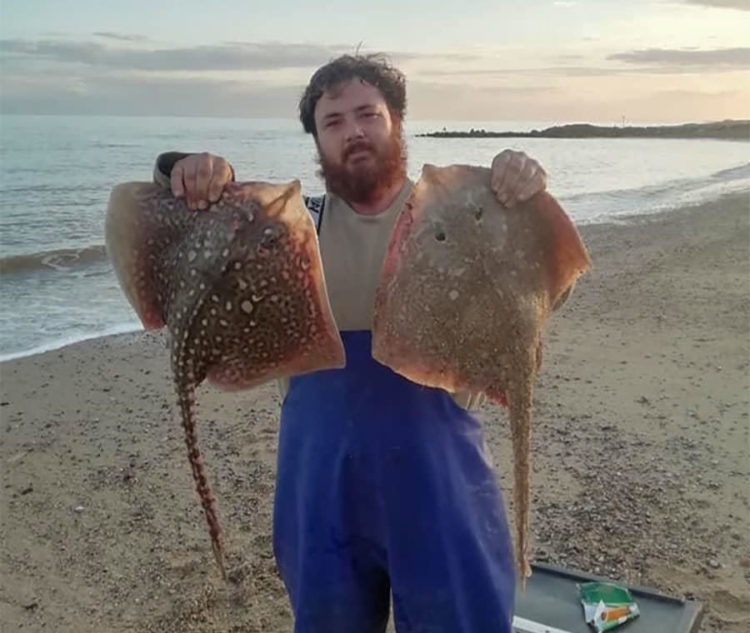 The Walton Pier Club fished an afternoon high tide for their latest match, and weather conditions were typical for March. They endured strong winds, hailstones, sunshine and strong winds. Eleven members fished the bottom part of the Pier, and seventy- two fish were weighed in!

They landed whiting, flatfish, rockling and some codling and the winner on the day was Peter Harris with 2lb 15½oz. Second place went to Joe Marvell on 2lb 11½oz and third placed Robert Pobjoy weighed in 2lb 5oz. Chris Oxley landed the biggest codling of 12½oz.

Plenty of thornback ray have been showing from the Holland on Sea beaches, with most anglers reporting a catch of at least one or two. Ben Scammel headed down to these beaches to fish a daytime tide, and he landed five thornback ray along with a couple of dogfish. He also reported that heavy weed hanging on the line was a problem at the moment.

Clacton Pier is once again open for fishing and anglers are benefiting from the influx of thornbacks along with dogfish, whiting and school bass.

St Osyth beach isn’t missing out either on the ray front with multiple catches being caught. Olly Yallop spent an afternoon here, he caught 5 thornback rays up to 8lb 11oz.

If you have any photos or fishing reports you can contact me at popplewell1@btinternet.com

The high tides for the weekend are Saturday 10.22am and Sunday 11.15am

Success For Adie In Ex-Service Cup

Isolation Kicking In On Fylde Coast