Success For Adie In Ex-Service Cup

The Skegness Pier Angling Club (SPAC) AGM and Trophy Presentation took place on Saturday 7th March from 7:30pm at the New Park Club on Scarborough Avenue, Skegness. Unfortunately this year’s AGM clashed with a major fishing match on the Holderness Coast, which reduced attendance somewhat. But 20 still turned up to enjoy another great family occasion and there was a really nice atmosphere, with plenty of fun and laughter.

Before the social side commenced however, there was the little matter of the AGM to get out of the way; then a donation of £100 was made to Mairi Perry, Skegness Lifeboat Fundraising Manager. SPAC continues to support this very worthwhile charity and since 2007, the Club has made donations totalling £1025 to the local Lifeboat Station, money which has been used for saving lives at sea.

After the presentations, a buffet was provided, then most won at least one prize in the AGM raffle. A great evening and a big thank you goes to everyone who attended. Also, many thanks go to Paul and Christine of the New Park Club, who have hosted us so royally since they took over the Club a couple of years ago.

The annual AGM match was fished for the Ex-Service Cup, from 3 till 7pm at Marsh Yard (Moggs Eye). Once again due to the big match “oop North” we had a poor turnout, with just 7 coming along to fish in the perfect conditions of a calm sea and westerly wind, coming from behind the anglers to help with casting. A welcome addition to the SPAC fold for this match was “Eel Man” John Spalton, whose mum and dad were SPAC members in many years gone by! 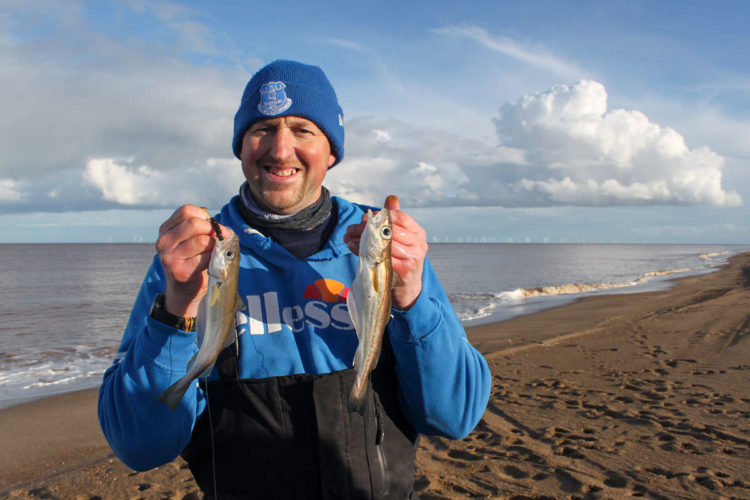 Match winner Adie with a double shot of half decent whiting

Marsh Yard was a bit of an unknown quantity, but we were hoping that the good fishing from the last few matches would carry on into this one. The match started well, with rods nodding from the start and small whiting starting to come ashore. At the southern end of the match stretch, Dan Jackson’s prodigious casting soon resulted in a whiting treble shot, including one at 32cm, whilst Adie Cooper next to him also found a decent 31cm whiting early doors.

Distance seemed to be the key, with short to medium range producing small pins, although Dave Hollingsworth found a couple of 30cm plus whiting, but was missing bites from smaller fish too. By mid-match, Dan was in the lead with 190cm, with Adie a couple of fish behind and Dave not that far adrift. Rick Jarvis was being his usual consistent self, but just couldn’t find any whiting of decent size, then a crack off set him back a bit. 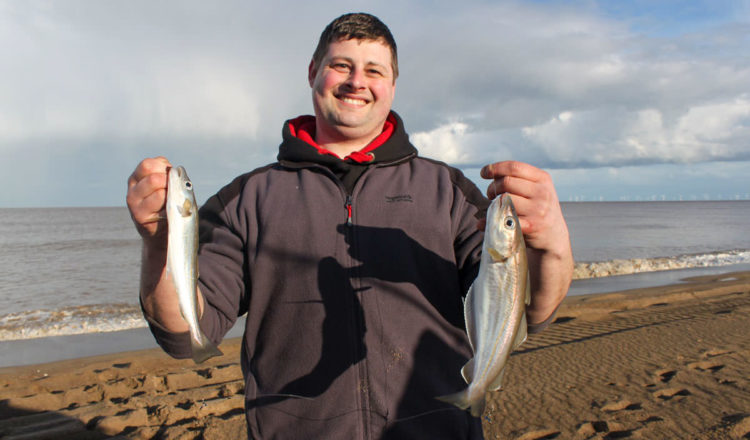 Sport slowed a lot over slack water, with the anglers varying distance to try and find the fish. Then as darkness fell and the tide started to run, “hound magnet” Adie came on song and put on his usual display of speed fishing. He ended up overtaking Dan to win the Ex-Service Cup, with 18 fish measuring 481cm in total. He also won the longest round fish prize with a 34cm whiting and caught the only flattie of the match, to win the longest flatfish prize with a 28cm dab. Dan also had 18 fish, but of slightly smaller average size, taking second place with 429cm. Rick Jarvis ended up with 15 fish for yet another third place, with 330cm. 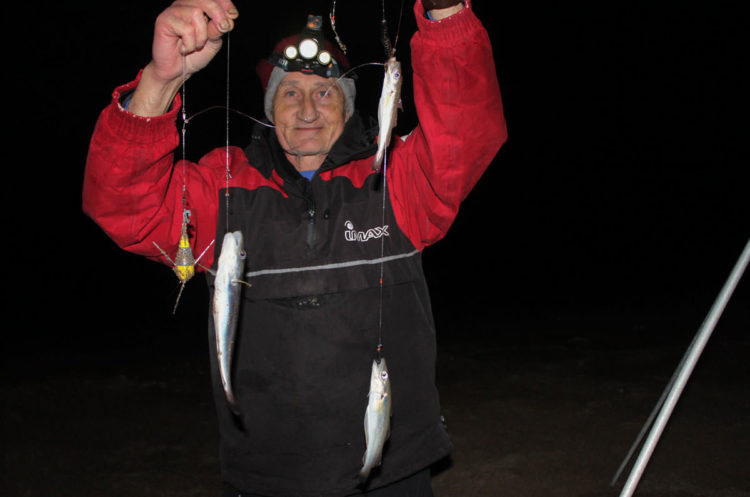 Third place yet again for Rick Jarvis, who struggled to find any decent sized whiting

So after the highs of the first four matches of the year, Match 5 turned out to be a bit of a disappointment, with just 76 fish caught, consisting of 75 whiting and just the one dab. 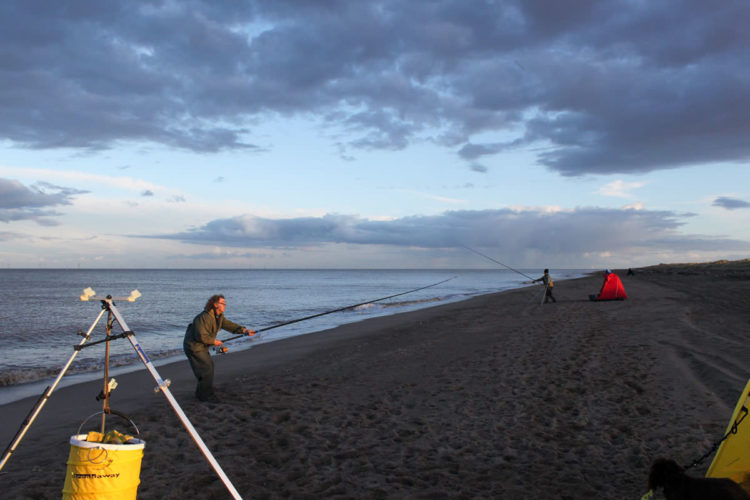 The next SPAC match will be held on Saturday 21st March from 2:30 till 6:30pm at Trunch Lane. The match is open to all and Club members will be fishing for the Derby Miners Cup. Hard copies of the match rules will be available on the day for those who have not fished with SPAC before. Please pass on to those not on Facebook and please contact SPAC Secretary Chas Tibble on 07984 967988 or chastibble@hotmail.com for further details.