The heatwave carries on again this week and temperatures have hit an all time high, not great for fishing. Our seas have cleared from the usual brown sandy looking waters to something that resembles a tropical setting and for our beach fisherman it has made things even more difficult with fish heading to cooler deeper waters.

My trip this week was to Walton Pier and I was greeted with very clear water. I fished with very light lines and lures and managed a few small bass and a pollack which have been few and far between in the last few years.

The highlight of the week from the pier was a stingray caught from the top of the pier by Lee Grego from Colchester, he caught the ray on a squid and ragworm bait.

Evening tides have seen a few sole being caught but you really will have to fish well in to dark to get results. 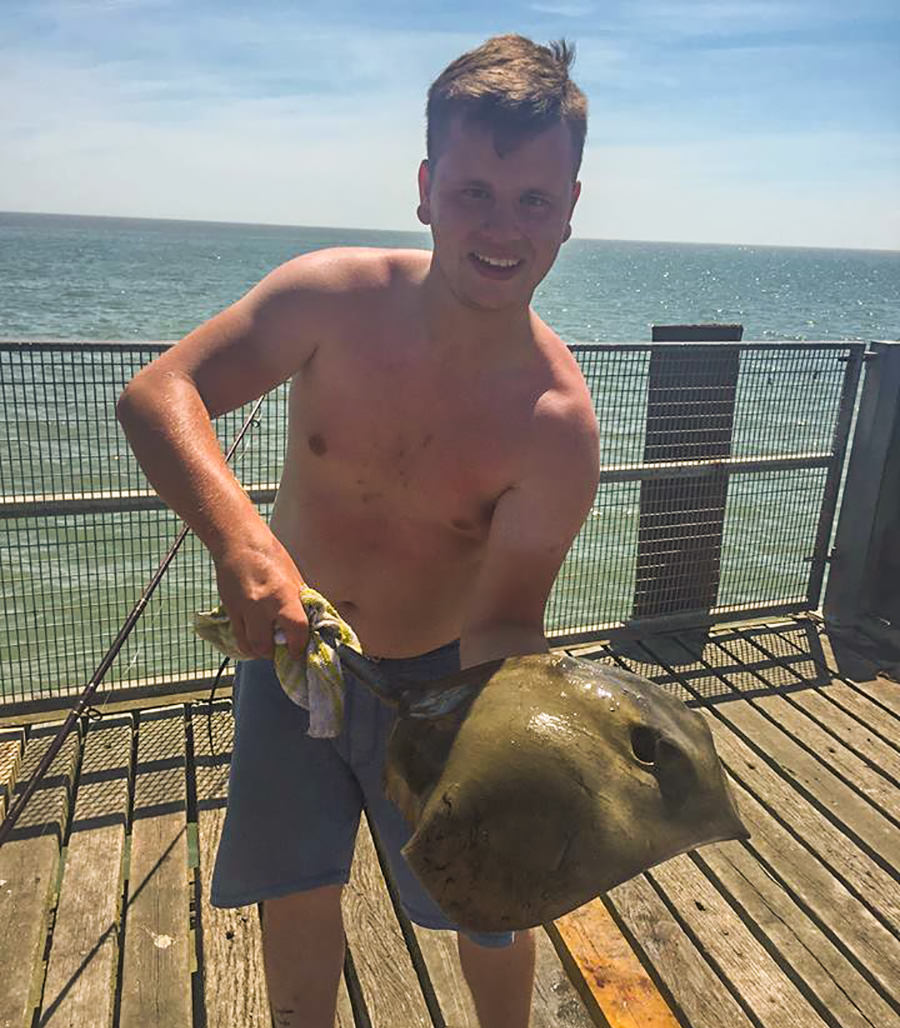 Lee Grego with his stingray the bait was squid and ragworm

The Walton beaches are much the same. Fishing during the intense heat of daylight hours has proved fruitless and night tides will always see a few fish to be caught.

Holland on Sea has also suffered with the strong sun and light winds, and to be honest it really does make for uncomfortable fishing. After dark the odd sole and ray are to be caught, even the school bass have been difficult to catch.

Clacton Pier is much the same as the rest of our coastline with just the odd thornback ray and small bass to be caught.

St Osyth beach has seen a few school bass and eels but we are struggling even here to see a decent fish being caught.

The boats this week have caught a few fish; I think it all depends on how far you want to travel! There are still a few tope to be caught on the distant marks. The Gunfleet sands and surrounding area have been slow, a few smooth-hounds and the odd thornback ray, although bass are still being caught on long flowing traces and ragworm baits.

Colchester Sea Angling Club held Round 4 of their Colchester Bait and Tackle Sponsored evening league matches on the Holland on Sea beaches. 22 anglers fished this 4 hour match, but because of the crystal clear water the fishing was difficult.

Top rod on the night was Neil Cocks with 4lb 14oz with most of his fish caught only a matter of 20 feet out! Second place went to Grant Tappenden with 3lb 1oz, Grant also won the heaviest round fish pool with a bass weighing 2lb 13oz. Third spot was Olly Yallop weighing in 2lb 11oz, the heaviest flatfish pool was won by Mark Sessions with a flounder of 15oz.

The high tides for the weekend are Saturday 1.08pm and Sunday 1.41pm

Summer Species On The Lancashire Coast