Peter Johnson was fishing at Gravesend on the Thames yesterday when he had a shock as a 10lb Siberian sturgeon picked up his ragworm bait, much to his, and most of Facebook’s amazement.

The sturgeon is an extremely rare catch in UK waters and can grow to over 500lb. In theory the fish, if kept, should be offered to the monarch but of late she no longer accepts the fish. In this case the sturgeon was returned after posing for photographs. 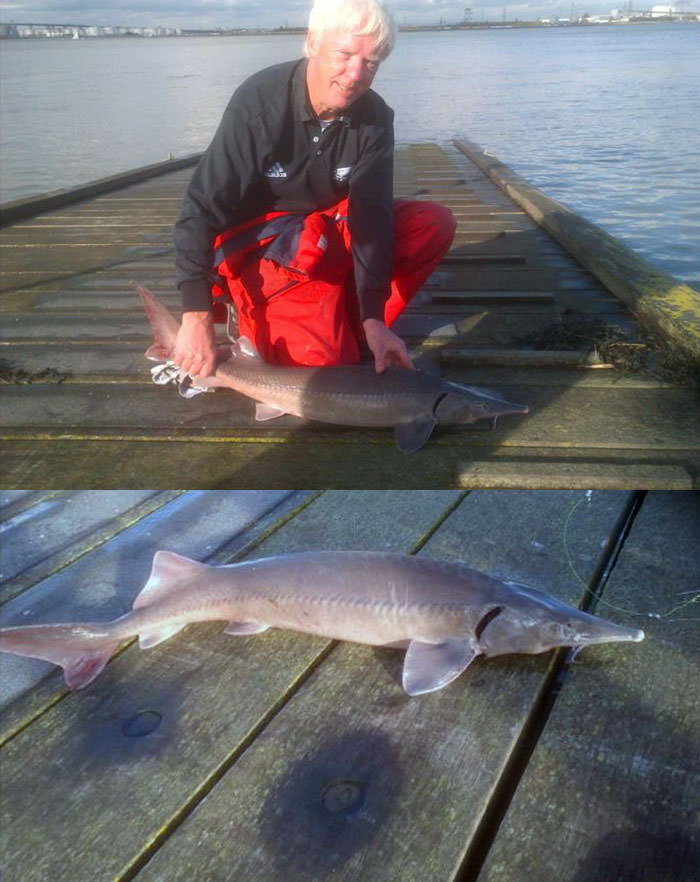 The catch was reported to the National Research Institute of Science and Technology for Environment and Agriculture (Irstea) at Bordeaux, and to the Leibniz-Institute for Freshwater Ecology and Inland Fisheries in BerlinFrench and German experts by the Institute of Fisheries Management (IFM). They confirmed it was a Siberian sturgeon (Acipenser baerii).

It was the second landed in the UK in exactly three months but some 250 miles from where the first was one hooked near Pembroke Dock, South Wales on August 2.

They are the first reported in British waters since 2004 when a monster more than eight feet long, was caught by a trawler also in South Wales, a mile and a half off Port Talbot.

Steve Colclough, chairman of the IFM’s marine specialist section, said the fish could possibly be one lost from cages in the Gironde river in France some years ago during a caviar farming experiment.

“We think it is more likely to be an escapee from the UK pet trade. These exotic species are imported and this may show that some are now escaping into the wild.

“The sturgeon caught in August was probably also a pet trade fugitive,” Mr. Colclough added. “They are alien species and it is an offence to introduce them into the wild in the UK”.

He reminded commercial fishermen and anglers to tell their local Inshore Fisheries and Conservation Authority or Cefas (01502 562 244) if they catch a sturgeon after first taking a photo and measurements and checking for any tag, and returning the fish alive to the water.

He said a yellow tag on a sturgeon would show the fish had probably migrated from the Gironde river in France where they are now being bred and released.

These fish would normally stay in the Gironde until they were about ten years old when they might migrate to the open sea.

If they came to the UK they would most likely be caught in estuaries and still be juvenile fish. Normally they would live 50 or 60 years and grow up to three-metres (about 10 feet) long.

Near Two Hundred Pound Skate from the Shore