Finally a weekend of flat sea and sunshine with a few fish about too. The Gynn Wall has produced dogfish, sole, pup tope, bass and small codling. The beaches at low water have been good for rays, bass, codling, dogfish, pup tope, smoothhounds and also the odd bull huss.

Fish baits such as wraps have been the most productive with the species that are around, also ragworm has come in to its own this weekend landing some cracking fish.

There has been plenty of boat angling with the members of the various Clubs making the most of the gap in the weather. Boats from the Fylde Boat Club, the Wyre Boat Club and Blackpool Boat Club have been launching all weekend. The sport is similar fishing to the Wall and beaches but with bigger numbers and the fish are much more prolific. Baits have also been the same.

Blackpool Boat Club member Neil Whittle headed out with Jan Louis Van Deventer for the day o n Sundaze accompanied by Jonathan Hall and Chris Nickson on Mazerflatty for a day off shore on a couple of wrecks.

They had the boats in the water for 07:15 and were joined by Kevin Fletcher on Lilly White and were soon underway in a lumpy sea. Following an hour and a quarter steam they arrived at the first wreck and were catching fish from the first drop. 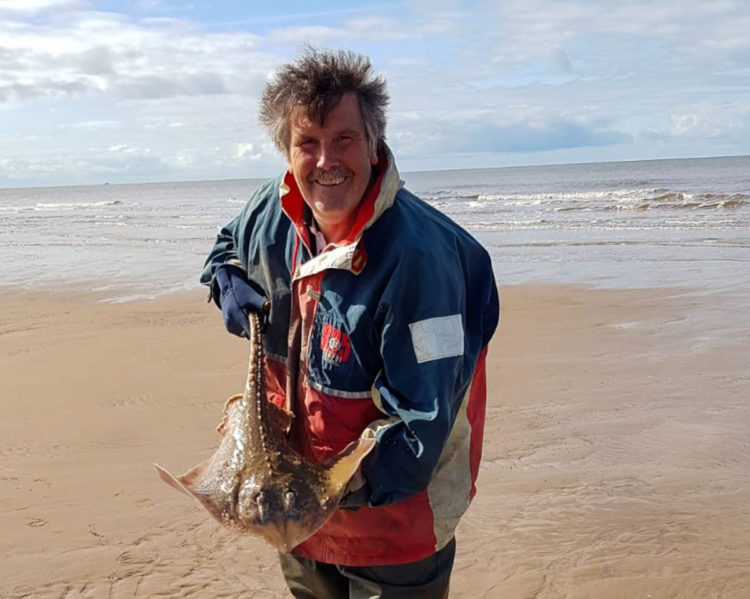 Lots of mackerel, scad, pouting, whiting, poor cod and gurnard coming to the boats. They moved to another wreck where the crews picked up a few pollack, whiting, pouting and dogfish.

Low water saw a shift to the third wreck and once the tide started to run we got a few more pollack, whiting, pouting, mackerel, gurnard, codling and ling.

They set off back for home at 15:30 hrs on a flat calm sea and landed back on the beach an hour later. Jan van Deventer added eight species to his species hunt and Neil an additional six species.

Jon Hanson fished the beach fishing over low water at Cleveleys. Fresh lug proved a struggle and Jon ended up using ragworm for the first time together with frozen black lug. It’s fair to say that he is a rag convert after landing three rays, two smoothhounds, dog fish and a whiting. 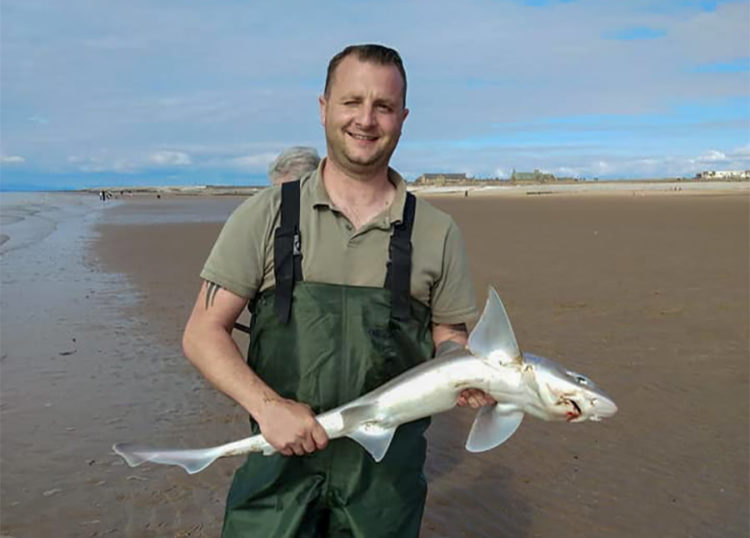 Jon with a smoothhound

Fleetwood and District Angling Club were out in next to no wind, calm seas and a very small tide and found the fishing tough going. Out of 15 anglers only four caught fish.

Eoin Broadhurst got off to a flying start with a 38cm bass on his first cast. That is how it stayed until darkness fell when Bob Egan and Ken Forrest each had a dogfish.

Mark Kindle had his rod nearly pulled from the rest by a 58cm bass then next cast had a good bite which resulted in a 37cm codling for a clear win.

Black lugworm and crab seemed to be the successful baits. Both bass were returned alive to the water.