There was a great turnout for yesterday’s Skegness Pier Angling Club (SPAC) match, held from 1 till 5pm at Winthorpe Avenue. Twenty anglers turned up to fish the match, including five ladies fishing in the annual Mixed Pairs, which was included within the main event. Competitors were met with ideal conditions of a light north easterly wind, no rain and a perfect sea with a nice lifting swell.

Winthorpe Avenue has been fishing consistently well for most of the summer, with plenty of smoothhounds being caught. But rough weather during the week had sent the hounds offshore and it was expected that smaller species would be about in reasonable numbers, making it a much fairer match for the ladies. So it proved, with rods soon nodding along the line of anglers, with the shorter casters faring well. 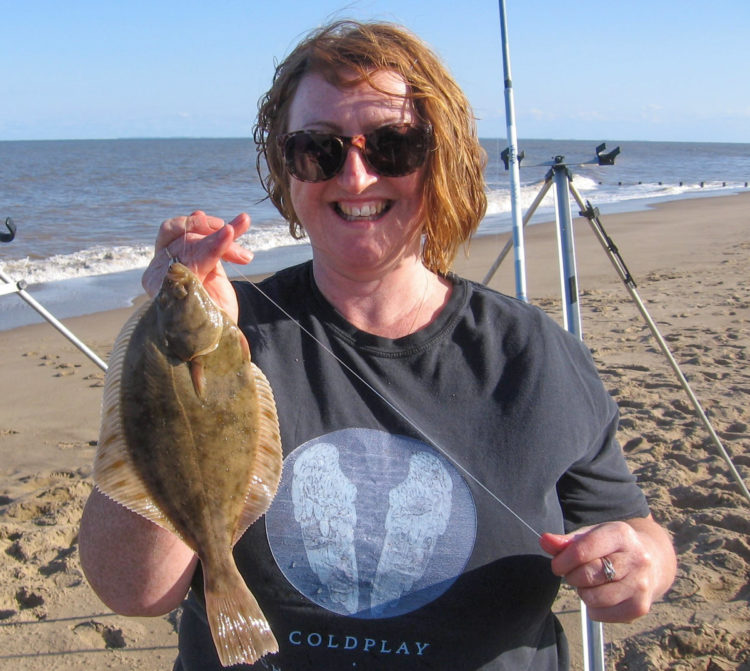 Lisa and Gary Collins had set up camp in front of the View car park and Lisa was soon showing Gary up, by catching a succession of small flounders at close range. Further along the beach to the south, Tracy Cooper Adams also got off to a flying start under the guidance of “hound magnet” partner Adie, catching small flatfish one after another. Further still to the south at the end of the line of anglers, Jessica Thomas also got off to a good start, with a couple of flounders and a pair of silver eels putting her into an early lead in the whole match with almost two metres on her card. 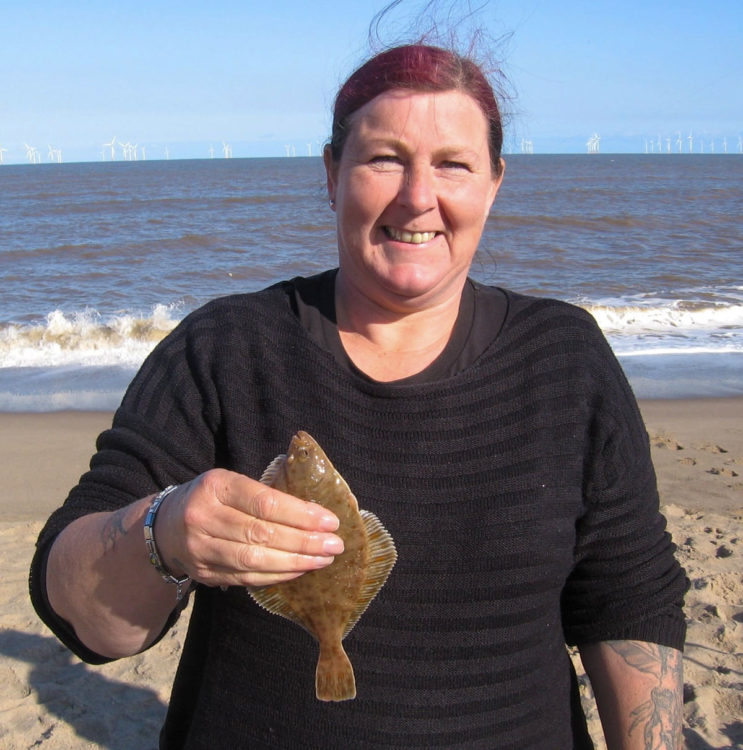 Samantha Collins with one of her flounders. These Collins ladies can certainly fish a bit

So with half of the match gone and lady anglers holding the podium positions, it looked like an upset was on the cards. But once the tide started to ebb, Adie showed his adaptability, fishing long three hook flappers baited with rag, blow lug and maddies, to catch flounder after flounder at close range. Fishing next door to Adie and Tracy, Dave Burr also recovered from a slow start, getting into his stride with a mixed selection of dabs, flounders, whiting and a couple of silver eels.

Angler not a dangler Bob Foster was also catching silver eels, carding three in among the flatties, whilst Kev Warner was also doing well, catching a variety of species on three hook flappers with tiny size 8 hooks. 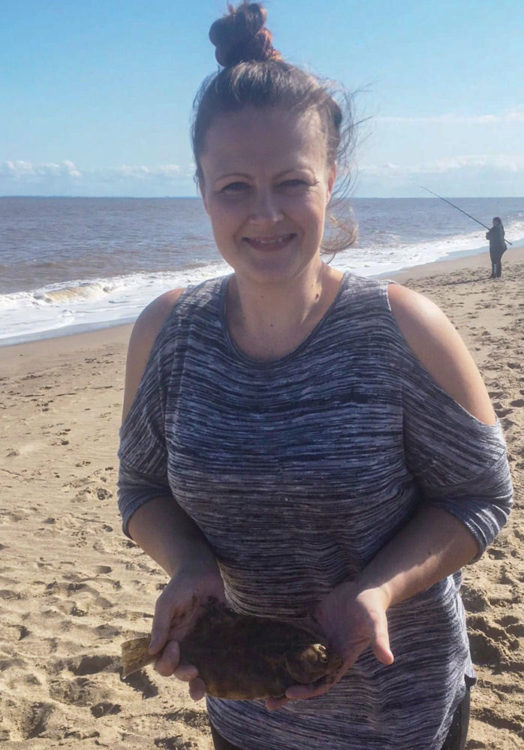 With half an hour of the match to go, everyone had caught at least one fish, whilst Josh Collier and Roy Munroe had each added a nice sized sole to the species tally.

The battle for individual honours was going right down to the wire though, with Adie and Dave Burr matching each other fish for fish. But with just minutes to go, Adie wound in a triple shot of flounders, winning the Mrs Wheatcroft Trophy with 14 flatties measuring 356cm in total.

Just that triple shot behind in second place was Dave, with a 12 fish mixed bag for 305cm. Adie’s partner Tracy continued to fish brilliantly, taking a well deserved third place, with 11 flatties measuring 268cm. Just one fish behind Tracy in fourth place came Jessica Thomas, with seven fish for 243cm. 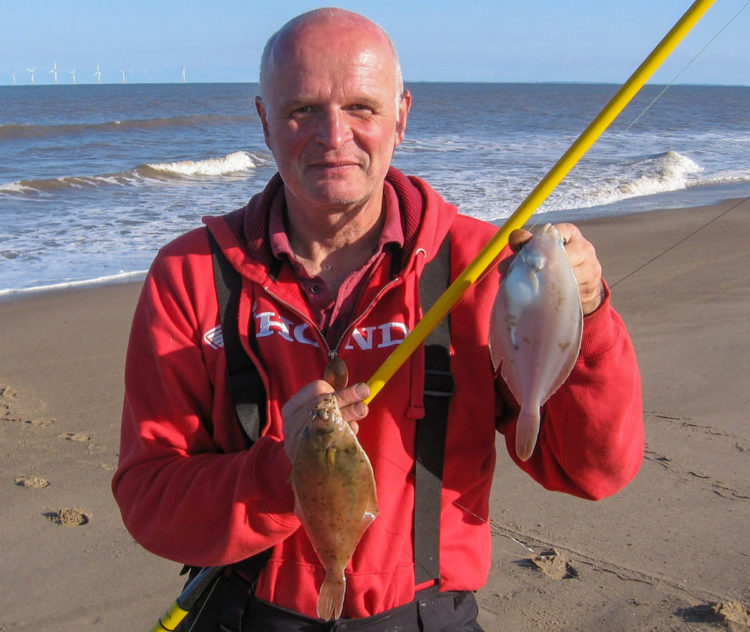 In the Mixed Pairs event, after coming second last year, Tracy and Adie were unstoppable this time, winning the trophies with a perfect score of two points. After winning the title for the last two years, Alan Steadman had a bad day at the office and despite Jessica’s success, they had to settle for second place with 12 points. 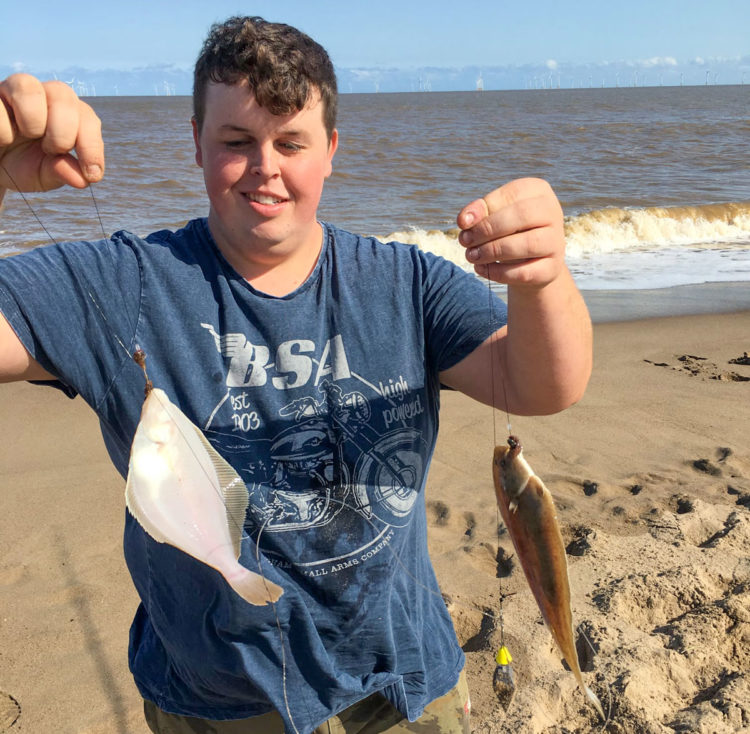 Josh Collier with a dab and sole double shot

All in all it was a very successful match, with pleasant fishing in a good humoured, family atmosphere. As match organiser, I really enjoyed walking up and down the beach and would like to thank everyone for allowing me to push my camera in their faces!! Congratulations to the ladies and we hope to see you all out-fishing the men again!

Great turnout and some lovely people. Shame they all had to be caged after the match

The next SPAC match will be held on Sunday 22nd September from 10am till 2pm at Trunch Lane. The match is open to all, with Club Members fishing for the Gamble Cup. With a couple of weeks to go before the match, there should be more whiting about by then, along with the usual flatties and still a chance of late smoothhounds. So why not come along and have a fish with our friendly little Club. Please pass on to those not on Facebook and please contact SPAC Secretary Chas Tibble on 07984 967988 or chastibble@hotmail.com for further details.

Lure Fishing For Bass In Cornwall