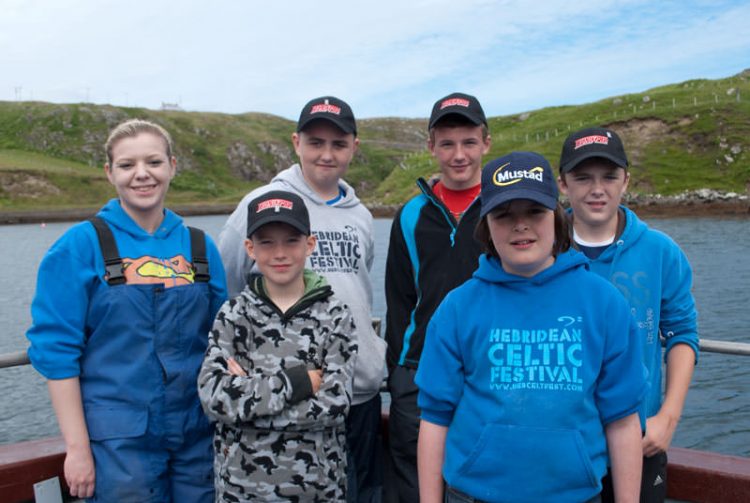 A conversation during the Western Isles Open event in 2010 led to Steve Souter and David Proudfoot from Planet Sea Fishing travelling over early for this year’s event to conduct a short boat coaching session with some of the Junior anglers from Stornoway Sea Angling Club.

Steve and David were accompanied by Scott Gibson from the mainland and Club Chair Donnie Morrison when they arrived at the clubhouse on the Tuesday night.

Unfortunately the date clashed with the local trade’s holidays and a number of the regular Junior members were off to the sunshine. However those that did attend the onshore coaching class not only had a great learning experience but also impressed the adults with their knowledge, skills and enthusiasm. The Juniors were taken through the construction of two basic but effective boat angling traces with every step being clearly explained by Steve and Scott. The bits and pieces for making the rigs were kindly supplied by George Cunningham of TronixPro and all the attendees received enough of the terminal tackle to produce rigs for the rest of the season. Additional tackle was kindly supplied by Shamrock Tackle, Daiwa and the adults in attendance all of which was shared out among the lucky students.

The planned two hour session soon spilled over and the evening finished with a quick weather check for the following day when the anglers would be putting their newly constructed rigs to the test.

The Wednesday morning saw the Juniors and adults from the night before piling into the minibus and heading for Carloway on the west coast of Lewis where the Club’s excellent boat, SYSAC II, is moored during the summer. Skipper for the day Angie “Mopp” MacDonald and Roddy MacArthur joined the stalwart crew as the settled weather promised an excellent day at sea. The plan was to stick to the shallower water marks and Mopp set sail for west Loch Roag where it was hoped that the numbers of fish would keep the kids busy all day.

After a quick stop for mackerel near to the Old Hill the boat headed to the comparatively shallow water off the small island of Pabaidh Mor. During the steam to the mark the anglers were shown the basics of bait preparation but it was obvious from the mussels produced and whipped up by a couple of the older anglers that skill levels were a cut above that expected.

A friendly competition was set up and soon a stream of gurnards and flat fish were being netted and hauled over the gunwales. The action continued all day with codling, coalies, haddock and pollack joining the initial species. Throughout the day the adults passed on information relating to hooking and playing fish, baiting techniques and rig adaptions which the kids absorbed like a sponge and put into practice.

All too soon it was time to head back to port and thereafter back to the Clubhouse where a presentation took place. All of the Juniors received prizes courtesy of the aforementioned tackle companies and from generous donations from EFSA Scotland members Joe Connolly, Joe Edwards, Willie Clark and Willie Carr. Alderney Angling also donated enough spools of braided line to go round so the kids are well set up for the immediate future. In addition the attendees will all be receiving free membership to EFSA Scotland until the end of 2012.

As one of the lads said, it was like Christmas and his birthday all rolled into one. Given the success of the coaching sessions it’s hoped that this will be an annual event.