It looked like the weather would prevent any chance of getting to sea to sample some of the excellent, deep water, west country fishing during a week’s break in Devon.With a slight window in the weather forecast for Saturday 29th August we set off to Pops’ boat at Plymouth with the expectation that we would be restricted to targeting smaller species within the sound.

Having picked up some fresh rag worm from Clive’s Tackle & Bait we sorted the boat out, refuelled and set out in remarkably benign conditions.We edged further out past Rame Head and although there was a “longish” rolling swell the conditions were very comfortable.We needed no encouragement to set a course on the plotter and head straight out to the legendry “Hands Deep” reef, a little to the west of the Eddystone.This reef is very large in area and rises from 50m to just 7m at its shallowest point and has been the home of some monster pollack in the past.A tip from a commercial fisherman on a popular forum had suggested that whilst there were few big fish on the reef there were plenty of fish in the 3 – 4lb range and on light tackle these would be our targets.

I rigged two rods, one a simple flowing trace with a size 2 worm hook for wrasse and a second with a flying collar rig sporting a Calcutta Purple Haze 4″ shad at the business end.Pops rigged some giant hokkais to be baited with mackerel as we had also heard there were some ling on the reef.

I noticed on leaving the marina that the water was very cloudy and the colour Newcastle Brown Ale so was a bit concerned as to how effective lure fishing would be – I needn’t have worried.With the wind blowing from the west Pops set up a drift on the Western edge of the reef aiming to go right over the largest part which comes up to about 20m from the surface.With a small tide the drift was only around a half a knot and we would have ample time to try different tactics on different parts of the reef on each drift.I went down first with the flying collar rig.Thirty turns off the bottom and whack!A smallish pollack took my shad on the up slope as we climbed the reef, we were off and running.

As we hit the top of the reef I caught another pollack but as it was only a pound or so I returned it and switched to my worm rig.The result was instant, a rather bizarrely coloured cuckoo wrasse.

I have read that wrasse have the ability to change sex when there is a gender imbalance in the population.This appeared to have a back end that was coloured much more like a female and a very dark head that resembled neither the female nor male.Could it be that this fish was in the process of the “change”?

As we dropped off the back end of the reef I switched back to the shad rig and as we hit deeper water I managed to contact a better fish.The result was this nice pollack of around 3 to 4lbs.

So with five fish on the first drift alone things were looking good.I took a pollack of a similar size on each of the next five or six drifts. The wrasse rod was abandoned the cuckoos were a menace.

Then, with two more fishing boats appearing and a rib full of divers the bites stopped.We had a whole drift without a fish. I decided to try a change and rigged a fire-tail jelly wormto see if a change of lure would solve the problem.On the next drift I had the best run of the day.The fish took two long dives in succession before spitting the hook.I raced back down to see if I could hook up again and – BINGO!The fish was not nearly as athletic as the one I lost but another fish none the less. 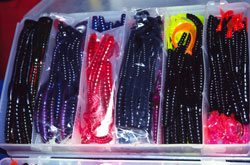 Pops also managed a pollack but with a few fish for the table and a large number returned we decided to try another mark.It is worth noting that with most of these fish being taken from high parts of the reef and high up in the water, the fish were in very good condition when reaching the boat and could be returned with no ill effects.

The second mark we chose was a wreck which lies some 3 miles or so north east of the reef on the way back in to Plymouth.In the past this has produced pollack, whiting and huge numbers of very large pout.A couple of recent tries had however produced blanks so we were not that confident.However, ours fears were misplaced!

I went down with the Jelly worm whilst Pops had switched to baited feathers in search of whiting.Pops had instant success with a nice double shot of prime summer whiting.I had tug after tug and only managed to hook up finally well off the wreck and very high in the water – the result another whiting.

I swapped my rod for the running leger rigged outfit and added beads and muppet to the hook length before baiting with frozen mackerel.While this produced a number of whiting it was nowhere near as effective as the baited feathers.The only disadvantage was that for the first time in a month the mackerel turned up in numbers and hammered the feathers on the way down.A quick switch to a much heavier weight saw the rig get past the mackerel and into the whiting. 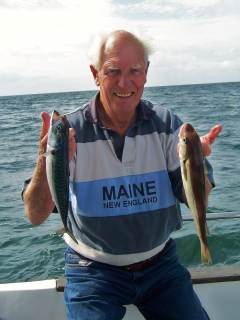 After about an hour, with enough whiting, mackerel and a single pouting boated, we decided to head off back the sound to try for ballan wrasse and use the rag we had purchased earlier in the day.

A simple running leger and a 4oz weight are all that is needed for this type of fishing.The ground is very rocky and the water only 20ft deep, so when fishing on the drift you need to stay in touch with your tackle to avoid snagging the bottom.You do however have to risk the tackle loss as the fish are tight to the kelp at the bottom.

The first drift from Cawsand Bay towards Picklecombe Fort looked like it would be blank, but then I had two small pollack in quick succession right at the end of the drift.

On the next drift we pushed the boat fifty yards further out.Another small pollack snaffled the bait and I was starting to have doubts that we would find the wrasse I wanted.I freshened the worm, choosing the biggest we had and as soon as I hit the bottom I had a couple of small taps.This was followed by the classic hit and run bite of a ballan, bending the light rod double and heading off for the safety of the rocks and weed.A short sharp battle ensued and the result was a beautifully marked fish of around a pound or so.

Having released the fish I quickly re-baited and hit the bottom again.This time there was no warning and the rod bent over before becoming worryingly solid for a second or two.Thankfully the fish emerged from the kelp and scrapped, as only these street fighting specimens can, all the way to the surface.Another fish of the same size but with even more extravagant markings.

While we didn’t land any trophy fish, this was a truly outstanding days’ sport.Armed with light tackle we had sporting fish from the first drop to the last, covered three different types of fishing and accounted for six different species.This is what small boat angling is all about!