Boat angler Les McBride believes test tackle should be pushed to the limit in honest ‘crash test’ style reviews. True to his word, he does his best to break Daiwa’s latest 3-piece Kenzaki Special Braid boat rods in Norwegian waters. 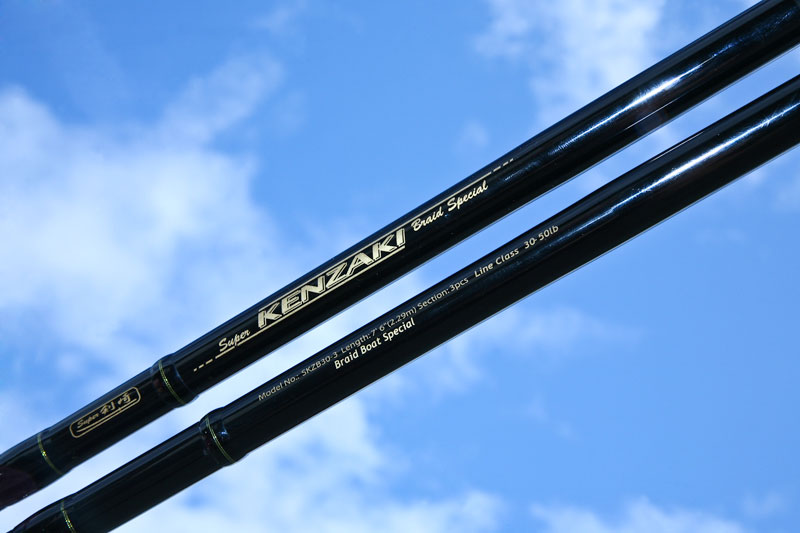 I am regularly irked to read some of the review tripe written in paper magazines where lazy authors have patently done little more than perform a perfunctory waggle… and often only in the false arena of an air conditioned office. Knowing my feelings run strong, Planet Sea Fishing digital magazine challenged me to carry out a full-blown ‘Top Gear’ style road test on Daiwa’s new 3-piece Kenzaki boat rods. I was happy to oblige and took them to Norway to do just that.

Some 20 years ago the original Daiwa Super Kenzaki rod range was imported into the UK from Japan. Something of a new concept back then, they were 8 feet long and comprised of two equal lengths as opposed to the standard UK boat rod length of 7 feet. I bought two of them: the 12lb class and the 50lb class versions. I never quite liked the stern action of the 12lb class rod and quickly moved it on, but I still have the 50lb, which continues to serve well for deep wrecking and has landed common skate to over 180lb.

Those original Kenzaki rods have long been confined to history, but two years ago Daiwa completely re-designed and re-introduced a Kenzaki range of boat rods engineered to work in sweet conjunction with the braided lines of today. These ‘next generation’ Kenzakis bear scant resemblance to the originals, other than retaining the two-equal section concept. Regarded as among some of the very best boat rods around, they have gone down a storm with anglers. And the success of the new 2-piece Kenzaki rods has prompted Daiwa to develop the range further and offer an additional set of 3-piece Kenzakis, which have just become available. 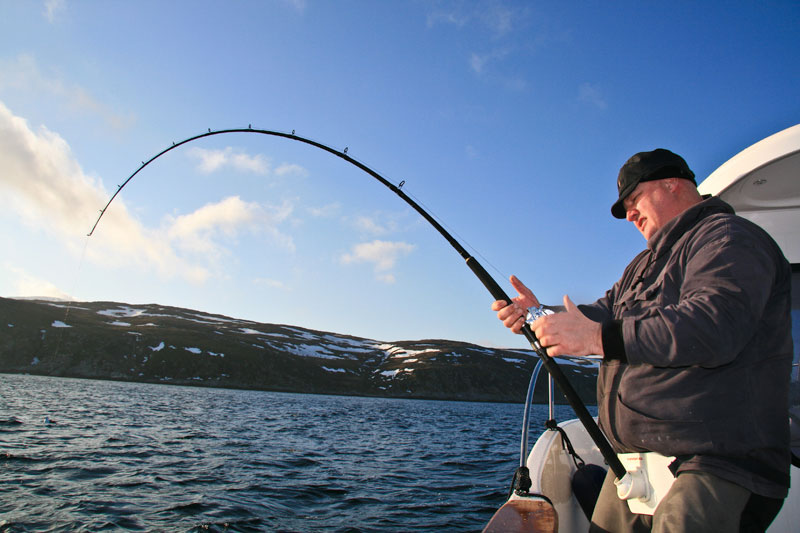 So why produce 3-piece rods? Daiwa can never be accused of being copycat at a time when the market is drowning in poor quality, snap-happy four-piece travel rods. And it should be clarified that these are not travel rods per say, rather they would be better described as compact general convenience rods ideal for everyday use. It just so happens that they fit in a suitcase too… a sort of ‘cake and eat it’ concept.

From technical and performance perspectives the more spigots or joints a multi-section rod has, the more ugly lumps or steps the working curve will display under load, and the more ‘interrupted’ the action will be. For this reason, travel rod/multi-section rod actions are always a compromise. The Kenzaki Braid Specials have push-in joints and the only difference between the 2-piece and 3-piece versions is that single extra connection. This effectively means that the rods display a far truer blank action than a 4-piece or 6-piece might.

Daiwa haven’t scrimped on the fittings with nine hardwearing Zirconium ceramic guides plus tip for use with modern braids, and a genuine Fuji reel seat with aluminium hoods on all rods. The trademark Daiwa ‘Powerlift’ triangular fore-grip affords a very comfortable grip, while there’s a large Fuji stopper on the butt end. The whipping and finish is top quality – if a little plain – in black, except for a couple of turns of gold thread on the ends of the butt ring whipping. 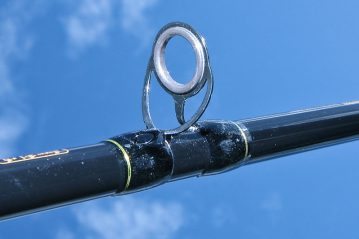 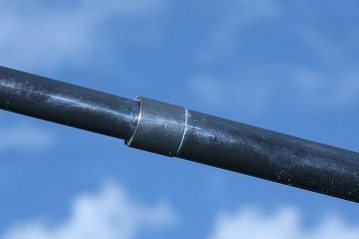 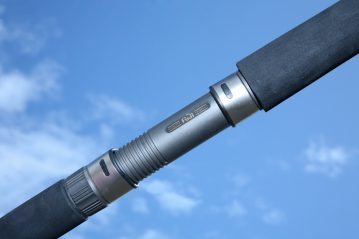 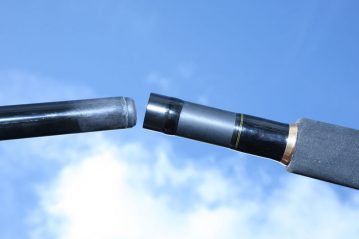 I’ve already mentioned the joints are the push-in rather than spigots or the push-over fit as used by other manufacturers. The result is a very rare and superb seamless curve under load that’s seldom seem in multi-section rods, even those that cost twice the price of these Kenzakis. All joints are reinforced with what appears to be a slim and unobtrusive brass band on the female side rather than a common whipping. This little feature ensures joint integrities, and underlines an alert attention to detail.

Formed from top quality MM35M carbon, all three Kenzakis have a crisp fast taper action in common. Curvature is properly progressive from the tip down, with bundles of reserve power in the bottom section. All rods are wonderfully light in the hands, and, as you would expect, there’s incrementally more power from butt to tip available as you move up through the range. I would defy anyone, who didn’t know in advance, to ascertain that that these are three-piece rods from observing the action.

I personally prefer this action to some of the classic Daiwa rods, which sport softer tips. The reel seat position is a little different from the standard, the catalogue states: “specifically positioned reel seat for maximum leverage.” Measuring it against other boat rods in my collection puts the reel at between 2 and 2.5 inches higher than average on the Kenzaki… more on this later. 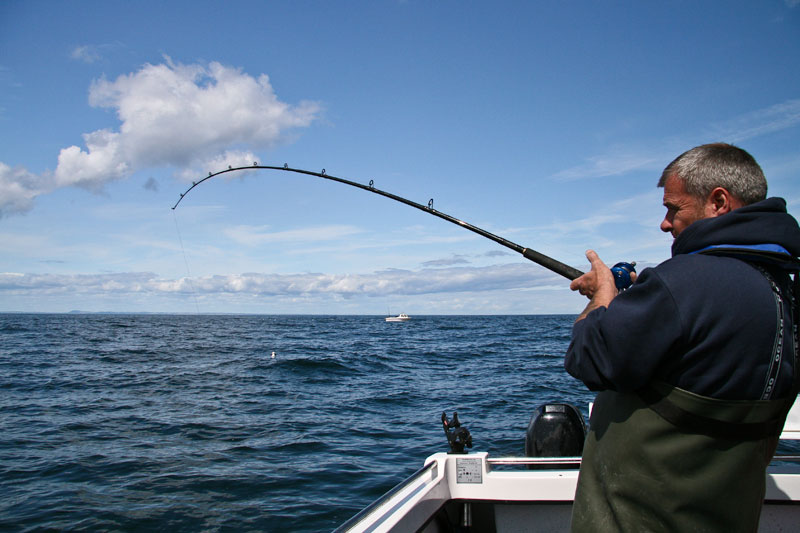 My confidence in the build quality of these rods was good enough to make them the only rods I took with me to Norway. I teamed the 12-20lb with a small Avet MXJ reel loaded with 20lb braid. The 20-30lb was paired with a medium sized Avet MXL with 20lb Berkley Fireline, and the 30-50lb carried a Daiwa Saltist 30 filled with 30lb Fireline. I like to play my fish hard with a tight drag, making them work to gain any line from my reel. This is tough on rods and any shortcomings would soon be laid bare… totally Top Gear!

With 150-200g pirks, the 12-20lb Kenzaki was a joy to use. Norwegian cod to 19lb, double-figure wolf fish and torsk were landed. I also had a couple of small halibut to 20lb plus, which really made the rod work for its supper! The action on lures was fine, but with anything over 300g the rod struggled. In 50 metres of water it didn’t have the backbone to set the hooks, and fish were lost as a consequence. So for the pirkers among you, think lures in the 60 – 300g range in conjunction with the 12 – 20lb Kenzaki. 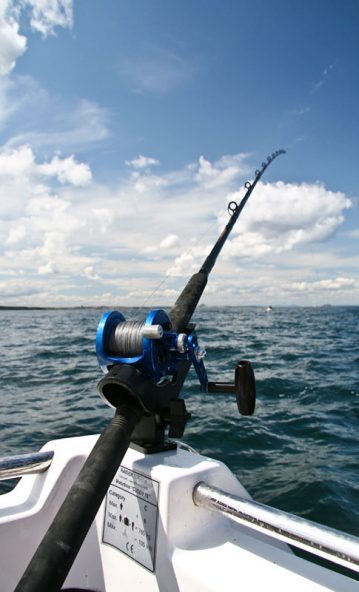 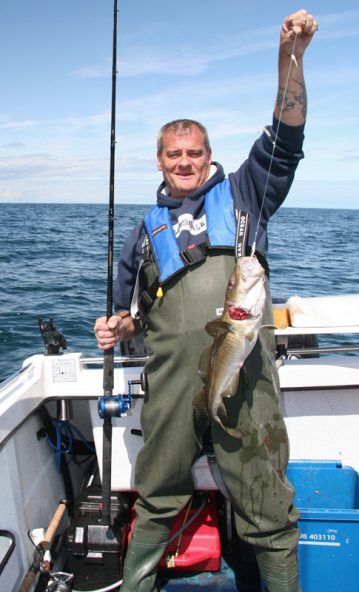 A lot of lighter rods tend to suffer a degree of torsion (torsion is when a rod bends and the rings at the tip twist to the side) when bent into a full fighting curve. I was pleased to see that this wasn’t the case with the 12/20lb: plenty of rings in the right places and high quality carbon in the blank seems to have taken care of this. The only time the rod was out-gunned was when a small cod was grabbed by big halibut, which then proceeded to almost empty the reel before letting go.

In home waters the 12/20lb has taken tope to 40lb in very shallow water without any issue. It is a sporting rod par excellence and a joy to use on bass, codling, smoothhounds, wrasse etc. Bite detection is first class thanks to the fine tip.

All of the anglers in our group got the opportunity to fish with and comment on the three-piece Kenzakis. The 20/30 was the rod everyone liked. Pirks and Sea Waver lures to 400g were a breeze, but 500g was starting to push it. There’s plenty lower grunt, and using a 400g lure with a gummimak above, I managed to crank a double shot of 16lb cod up from 100 metres in quick order. The 20/30 also subdued halibut to approximately 50lb and felt like it would have handled much bigger fish. 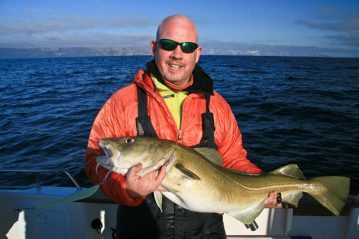 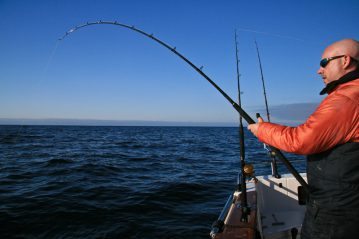 This rod has also been used at home, but in deeper water and faster tide conditions than the 12-20lb. It rides 1.5lb of lead with ease and has landed tope and bull huss with quiet efficiency.

Out of the three this is my personal favourite… I love this rod and beat halibut to 120lb on it. It has a fine tip for great bite detection, works 500g pirks beautifully, has the backbone to play big fish, but is still as light as a feather. Well capable of handling giant conger, big blonde rays in testing tides, blue shark and medium sized porbeagles.

The 30-50lb Kenzaki has since been back to Norway with a friend of mine for further punishment. This time the rod took a catalogue of big cod and coalfish, and it still looks like straight out the rod bag. 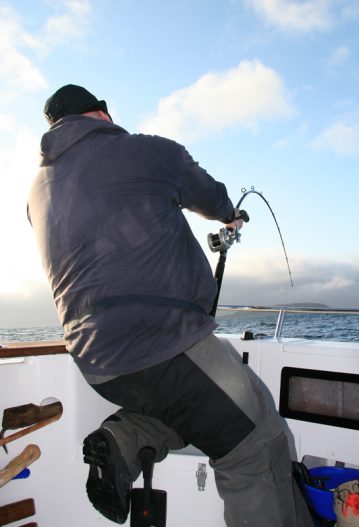 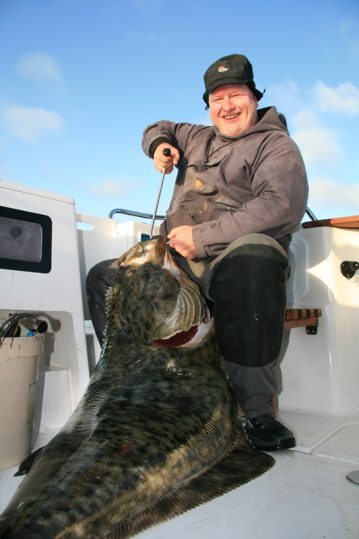 What would I change?

There is not much that I would change. The action is spot on, and the rating for the range is just right. Feedback from the lads on the Norway trip was very positive, but if there was a recurrent grumble then it was the length of the handle… they all thought it was too long.

The butt sits snugly under the arm when feeling for bites, but once you sock it to a big fish using a butt pad the extended location of the reel seat becomes noticeable. The slight over extension of the arms on a really big fish, such as a 100lb plus halibut, puts added strain on already protesting lower back muscles and forearms. For perfection, I would bring the seat down about 2 inches. 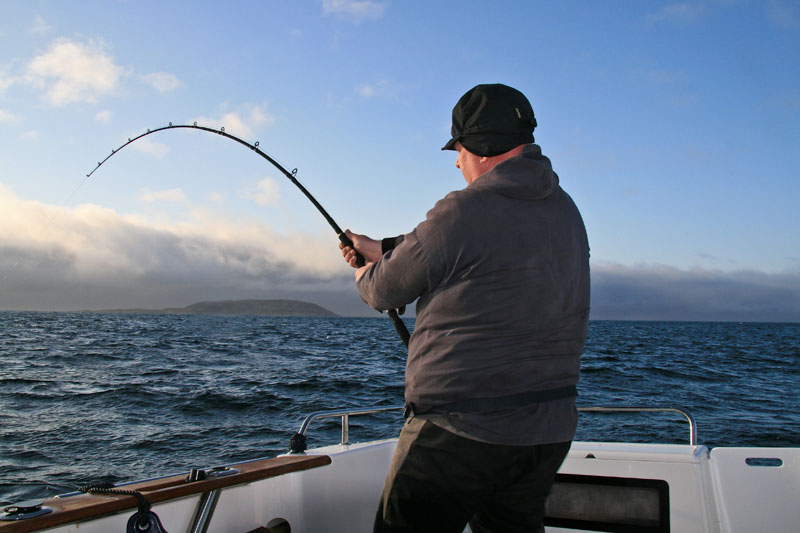 None of the rods in the range have a gimbal fitting on the butt, which is not important on the two lighter rods but on the 30/50lb it really is a necessity. Even with the comfortable Powerlift handle in front of the reel the rod still twists in your hand when applying considerable drag to a big fish. A gimbal would stabilise the rod in conjunction with a compatible butt pad.

The overall rod aesthetic is understated which is a great thing in many people’s books. Being a big girl’s blouse however, I would bling them up a bit: make the whippings on the different rod classes different colours perhaps. At least tip all the whippings with a bit of gold, maybe a little bit of airbrushed paint at the joints.

All the 3-piece Daiwa Kenzakis fit into the big holdall that I use for my fishing holidays abroad, and they will likewise go in a decent sized suitcase. My globetrotting head thinks a hard carry case would be a nice touch, but the additional length incurred would probably make fitting into baggage a problem. And in truth, many anglers don’t carry the heavy hard cases to cut down on both bulk and weight. 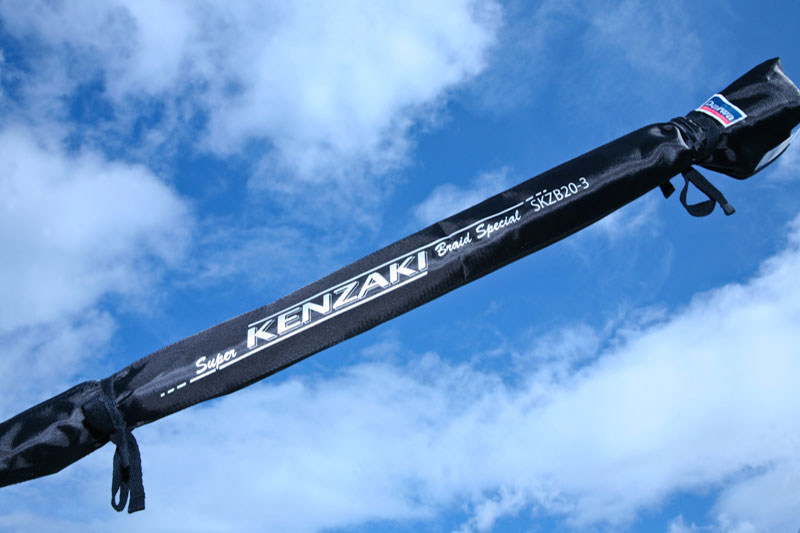 I would enjoy fishing with a fixed spool version of the lightest 12/20lb rod for bass and general light sport fishing. However, I appreciate that this area is already well covered elsewhere in the Daiwa range with likes of the Tournament Sea Bass rod.

Remember, these are ‘Jack-of-all-trades’ rods rather than travel rods. They are superb for general everyday use, and being constructed of three sections, they will stow out of sight in the boot of even a small car.

All in all a top performing, top quality range of rods that should prove as popular as the 2-piece Kenzaki Braid Specials. They come supplied with a bag and are priced the same as the 2-piece versions at £129.99. The usual on-line discounts, if applied, should see them available for around £90.00, which is excellent value for rods of this pedigree.