Penny for them – Madpolka’s Weymouth report

I couldn’t believe my luck that with a fantastic forecast from the Met Office there was actually a free space on a Saturday being advertised for a day’s fishing from Weymouth.  So after a hastily negotiated day pass from my wife (involving bribery with a Chinese take away) I called Colin Penny, skipper of Flamer III and was all set for a trip in a rare bit of sun shine.

Arriving at the boat Colin explained that the unsettled weather had dispersed the shoals of bream that are normally the mainstay of sport at this time of year and that the bream fishing had been very poor.  The plan was therefore to spend the day in search of some of the flatfish that Weymouth is also famous for.

The crew for the day was made up of 5 guys from Bath, a father and son team from Wakefield and a couple of local guys who are regular anglers with Colin.  Colin explained that we would start the day looking for bait then would spend an hour on a reef in search of conger, huss etc whilst we waited for the tide conditions to enable us to drift the mussel beds for plaice.  In the afternoon we would go to the Shambles in search of brill and turbot.

As we left the dock I rigged up a 10lb class outfit for the plaice and a 20lb class rod for the turbot.  On the way out of the harbour  I noticed that there seemed to be a large number of these enormous “Gin Palaces” in Weymouth this week-end – I guess the economic climate doesn’t affect everyone!

First stop was the Portland Harbour breakwater for some Mackerel.  We would need a fair amount for the turbot and brill fishing and also for trying for the conger.  One of the Bath contingent contacted a fish instantly but when it was landed it turned out to be a small bass which of course was returned.

With just one or two mackerel showing my thoughts turned back to this time last year when I fished one of the days in the annual Flamer festival and failed to catch a mackerel all day!  As we reached the Portland Harbour entrance however things picked up.  The Bath contingent registered another species by catching a string of small pollack and shortly after we hit a shoal of mackerel with everyone on the boat adding to the total.  Within 2 minutes we had some 20 to 30 fish and then they were gone.  Colin decided to move off to the reef where we hoped to get a few more at anchor.

Feathering at the reef didn’t produce anymore mackerel but did produce a number of scad.  Wanting to preserve the Mackerel for the turbot fishing Colin set about filleting the scad which we would use in conjunction with squid for the conger and huss baits.

Fishing was slow on the reef with just a few more scad being registered.  Nobody minded too much as this was just filling time whilst we waited for the tide so we could go after the flatties. Despite the slow fishing though we had already registered four species and it shows the incredible diversity that the Weymouth inshore fishery can offer to the angler.

Soon enough Colin called for the baits to be brought in and we headed off to the mussel beds off the end of Portland Bill for a go at the plaice.  We fished for these on the drift with light weight outfits connected to flowing traces (mostly with two hooks) decorated with all manner of beads, spoons and sequins.  The baits were ragworm tipped with squid strips.  Colin advised us that we had to present these baits in as “streamlined” a form as possible and that bunches of bait at the bottom of the hook wouldn’t work.

First drift saw a number of fish landed.  The first was a bream of around 2lbs that fell to James who is a regular pleasure and match angler in Weymouth.  Despite this, Colin’s prophecy about the state of the bream fishing proved to be true as it was the only bream we saw all day.  The first of a number of gurnards also started to show with myself among others registering red gurnards. 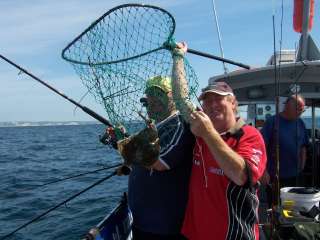 On the next drift I followed up with a tub gurnard which was a very pleasing first for me.  Honours however went to Stuart from Wakefield who managed a nice average sized plaice.

Stuart and his son, Ben, were using 9ft long rods and large fixed spool reels that seem to be more and more popular these days for this type of fishing.

Ben was the next to register a plaice which you could see as soon as he bent in to it was a better fish.  Ben had a fish of close to 5lbs earlier in the week as well and had clearly learned the knack for professionally presenting the fish to camera!

Subsequent drifts produced just one more plaice for Geoff from Bath. Geoff also registered one of the better gurnards on the day which continued to show on all of the drifts we had on the Mussel Beds.

With the tide increasing all the time on the Mussel beds it was time to head off to the Shambles for a crack at the brill and the turbot. The tackle is a simple 4 to 5 foot mono trace (30lbs plus) with a 4/0 Kamasan hook.  The bait is a thin sliver of Mackerel fillet cut the full length of the fillet and hooked once through the narrow end.  The difficulty comes in feeling the bites.  As you drift over the banks the depth varies and the various tidal rips you pass through grab and snatch at the terminal tackle keeping the rod end nodding the whole time.  This makes bite detection very difficult, for me anyway!.  Using braid amplifies this significantly and certainly in Devon where the skerries are fished in a similar style some of the skippers recommend using nylon throughout.

First drift saw me lose two baits without locating the fish.  Steve from Bath however showed us that the fish were there by capturing a nice brill.  This was a first for Steve and a case of revenge.  Steve had been to Alderney on a trip with the rest of the Bath crowd and whilst there all the others had registered a brill on one single drift except for Steve, so he was pleased to get his own back!

At this point in the proceedings I finally managed to get two very sharp bites.  Sadly neither was from a fish.  A seagull had managed to snare its wing on Stuarts’ line as it chased a bait in the water.  Having managed to get the bird on board it broke free and nipped me on the hand and in the kidneys.  I bore the discomfort with all the stoic composure of a seven year old school girl, much to the amusement of the rest of the crew.  The gull was released with significantly less damage both physically and to its dignity than me!

of the target species for the day.  With no more flat fish showing we decided to spend the last hour of the day anchored on some rough ground in Weymouth Bay where Colin had caught some smoothhounds the day before.  No smoothhounds showed but we did register dogfish and another gurnard.

Despite the sport not being prolific we did catch all of the target species and managed to amass twelve different species of fish in total for the day.  It is clear to me now that fishing for flatties requires both patience and finesse, neither of which are qualities I have in abundance.  Time for some pollacking next time out I reckon!