A good heavy sea running last weekend and into the start of this week arrived just when anglers needed it, and it produced some nice bags of cod all along the north east shoreline. Some of the Hartlepool piers fished very well with fish up to 9lb in bags topping 30lb. The various local low water marks also produced some good bags of cod with Crimdon on top form for a change. They soon disappeared however, as the sea quickly dropped off leaving large numbers of whiting and dabs in charge. Some anglers took bags of over 20 whiting, some of which were of specimen size with nice fat spawning whiting full of roe approaching the 2lb mark amongst them. After being missing for most of the winter whiting seem to have moved inshore in large numbers with Roker pier, South Shields pier and the lower Tyne all producing some big bags. The lower Tyne and the Northumberland rock edges have once again been the top marks to fish.

Club matches have been won with double figure bags, and cod dominated early in the week with a few double figure specimens landed, then big mixed bags of whiting, flatties, and the odd cod following on as the sea settled. G. Sidney won a Bedlington Station match with seven cod for a total bag of 32lb , including one of 10lb 15oz, followed by S. Brannon with nine fish weighing 16¼lb and S. Surtees with eight for 15lb 14oz. Blyth beach is a top spot in a heavy sea and Keith Smith won a Blyth match with 11 cod weighing 27lb 8oz, Chris Kell had six totalling 10lb 11oz, and Peter Smith had a four fish bag of 8½lb. Ian Greenacre had the heavies fish of 4lb 14oz. Brian Clennel fished Cambois to win a Seaton Sluice match with five cod for 11lb 3oz, the best at 4lb 7oz. Nine out of 15 landed 26 cod in an S.B.R.A.A.C. match won by Iain Galbraith with six cod for a total of 13lb 1oz, including one of 5lb 15oz, taken at Whitley Bay beach, ahead of Malcolm Watts with five weighing 10lb 15oz. Paul Brown won a Whitley Bay match with six cod total of 13lb 11oz, the best 5lb taken from the Pipe End. 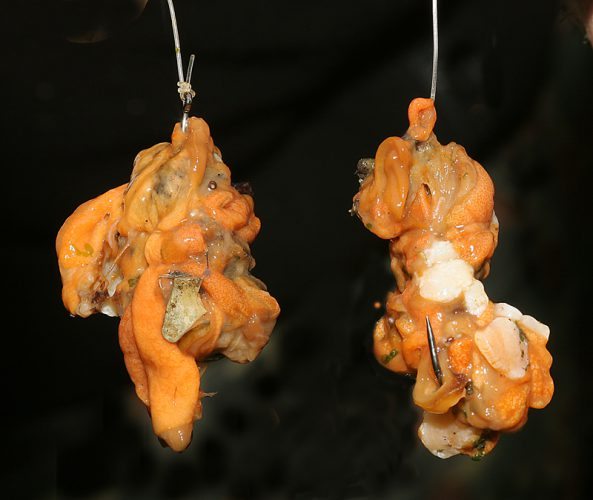 Tynemouth A.C. have had some spectacular weigh-ins with fish landed from the lower Tyne, the Middens, and the local rock edge marks. A Winter League match was won by Marty Elliott with six cod totalling 18lb 9oz. Dave Rae had seven for 17lb 14oz, the best at 5lb 13oz, Tony Anderson had seven for a total of 16lb 1oz, and Steve Hardy had eight weighing 15lb 10oz. A Tynemouth retired members match saw plenty of mixed bags landed. Bob Gascoigne won with 12 whiting and four cod totalling 13¾lb ahead of Tony Anderson with a mixed bag of whiting, dabs, and coalfish for 7¾lb. A Tynemouth Sunday League match saw even better results with Bob Gascoigne winning again with 24 whiting, two cod and two dabs weighing 18lb 13oz. Steve Harper had 19 whiting and one dab for a total of 13lb 11oz, and Mick Styles had 16 whiting for 12lb 6oz.

The rock edges between the Tyne and Wear continue to produce cod. Terry Wood won a Cleadon match with three cod for 12lb 10oz, including one of 6lb 14oz taken at Whitburn, just ahead of D. Hall fishing the same mark whose four weighed 11lb 3oz. George McClurgh had a cod of 9lb from Hendon Promenade during a recent pleasure session, and Alan Robinson had a productive session at Camel Island taking seven cod totalling 28lb, with the best at 8lb 10oz. The usual rock edge and pier marks south of the Tees have also produced cod. Paul Kilpatrick took 10 cod to 9lb from Whitby West pier. Another period of Northerly winds later this week should hopefully bring any cod back inshore quite quickly and there is always the chance of a big double figure specimen at this time of the year, particularly from the Hartlepool piers.

Blyth S.A.C. have the Dave Jobson Memorial Open on Sunday February 8th with fishing from 9.30am until 1.30pm between the Ice House in the Tyne to Seahouses South pier (excluded). Basic entry is £10, juniors are free, and those under 14 must be accompanied by an adult. Register from 7am until 8am at the Sea Horse, Plessey Road, Blyth. Top prizes for the heaviest bag are £200, £100, £50, 100% payout for the heaviest fish and a tackle voucher for the junior winner. Contact Nigel 07988 465416 for details.