Trawling for bass during the spawning period has been banned in a historic set of emergency measures aimed at averting a total collapse of Europe’s bass stocks.

The ban on pelagic trawling – which accounts for 25 per cent of the impact on the stock and includes the controversial method of pair trawling – will begin immediately in the Channel, Celtic sea, Irish Sea and Southern North Sea and run until April 30th during which time adult bass aggregate to reproduce and are most vulnerable.

The EU is putting forward further measures to deal with the impact on bass stocks of recreational and other commercial fishing methods. For recreational bass angling the proposals include a three fish a day bag limit and an increase in the legal minimum size of bass from 36cm to 42cm. 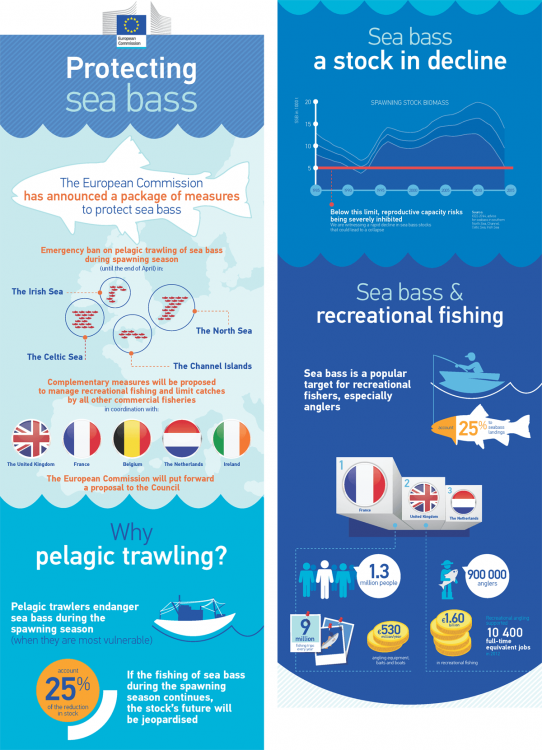 The European Commission is also proposing limiting catches for other commercial bass fisheries and is working on a proposal with member states which will be taken to the Council of fisheries ministers as soon as possible.

The emergency measures have been introduced following scientific advice in June 2014 that recommended an 80 per cent cut in catches from the previous year and confirmation that continued fishing pressure was leading to serious harm to the reproductive capacity of the stock.

This is the first time that Article 12 of the reformed Common Fisheries Policy has been invoked due to, “A serious threat to the conservation of marine biological resources..”.

The Angling Trust and their partners at the Bass Anglers Sportfishing Society (B.A.S.S.) and (European Anglers Alliance) have been campaigning tirelessly for the introduction of conservation measures for bass – a crucially important recreational species and one that generates hundreds of millions of pounds and supports tens of thousands of jobs across Europe. In 2012 the Angling Trust organised a delegation to the then Fisheries Minister Richard Benyon to press the case for bass conservation measures in the face of evidence demonstrating that stocks were in trouble.