Shore angling has improved over the last few days with a moderate swell bringing a few cod within range from most of the Region’s piers, beach, and rock edge marks. The Hartlepool piers have produced some codling around the 2lb mark and there are quality whiting present on most tides along with some big winter flounders. Many local marks are full of very small dabs, and on some tides small codling no more than five or six inches long. The promenade and Durham beach marks have generally had better results for cod catches with again cod to 2lb showing on night tides, and unconfirmed reports suggest an 8lb specimen being landed from the Twin Steps.

A recent Seaham match saw 24 out of the 98 entrants weigh in 44 fish for 41.49lb. Geordie Hope had seven for 9.12lb, the best 1.60lb, from the North Pier, Kenny McCoy had five for 4.44lb from the North Pier, and Paul Mullen had four for 3.37lb from the North Drum. Mick Newton won the Ryhope Tuesday evening sweepstake with a cod of 5½lb taken from Marsden. Seventy one anglers turned out for the Ryhope match on Sunday and found the sea too heavy to fish most of the shore marks, so most retired to the rivers for mixed bags of whiting and flounders. Lee Burton managed two cod from the Targets for 3.68kg before the sea became too heavy. John Lovett had six whiting from the High Ledge for 2.19kg, and Paul Hossack had two cod for 1.86kg. Gaz Watson had a monster flounder of 1.30kg for the best flatfish and top junior Tony Smith had 0.70kg.

There are plenty of fish in the local rivers with flounders from the upper reaches and various mixed bags of cod, whiting, flounders and coalies showing from the lower river areas. The rock edges between Roker and South Shields have produced cod around 6lb all winter and continue to do so, with most club matches producing the heaviest fish from Marsden or Ryhope. Paul Fenwick won a Cleadon match with two cod for 4¼lb from Marsden, and Neil Cutler had five whiting for 3lb 15oz from South Shields pier in a Cleadon match that saw dogfish also taken from the pier. 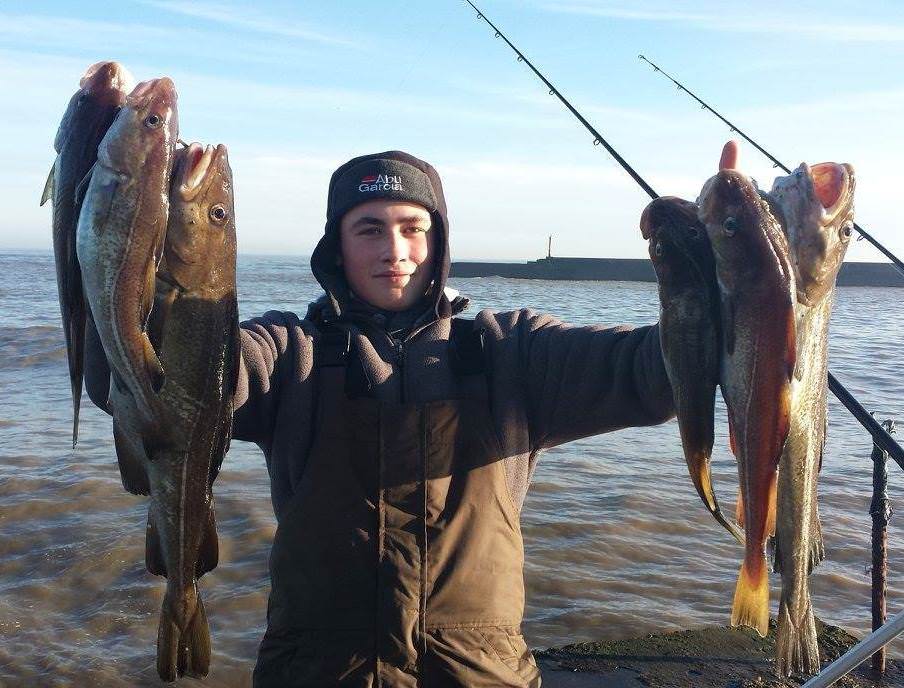 Arran Stead fished Rat House and had a terrific session with 17 in size cod landed, the best three weighed 6lb 8oz, 5lb 8oz and 5lb 5oz. Arran reports that the fish were stuffed with worms. sea urchins and small flatfish.

North of the Tyne the various beach and rock edge marks have been productive, a south easterly sea over the weekend saw some good results with all of the popular marks around Whitley Bay, Newbiggin, and up to Amble producing cod on daylight and night time tides. Bedlington Station had a match at the right time which produced 44 fish for 94lb 15oz. Winner S. Brannon had 10 fish for a total weight of 30lb 7oz, including the heaviest of 8lb 1oz, D. Shields had seven weighing 18½lb, and B. Jacobs had three totalling 9¼lb.

Cod have also shown south of the Tees where Sandsend has been productive with cod to 8lb reported. Darren Dalton won two consecutive St. Mary’s A.C. matches from here with bags of 7lb 2oz and 3¾lb. Daniel Redling also won a Saltburn match from Sandsend with two cod weighing 4lb 6oz. John Nixon fished Boulby to win a Redcar match with a single cod of 6lb 12oz, followed by Stan Preston who travelled to Hartlepool to land six whiting and two dabs for a total of 6¼lb.

Further south again, the Holderness coastline is often a popular choice for local anglers to travel to around March, April, and May, usually to try for cod, bass, smoothound and thornback rays. Fish have arrived early this year with 20lb plus bags of cod, whiting, bass and small thornback rays already being reported. If you want to head in the opposite direction, the shoreline around Arbroath has fished very well in the recent S.E. seas with double figure cod being taken among smaller specimens.