A persistent period of easterly and north easterly winds over the last few days scattered the huge mackerel shoals and brought cod back inshore. With so many mackerel present this year no doubt they will return if the seas settle down and the water clears up. The better cod fishing was earlier in the week for the bigger cod, and as the sea slowly died away lots of small undersize fish have moved inshore particularly around the Roker to South Shields area. Horden and Easington beaches produced bags of up to ten cod, the best around 4lb, Ryhope saw bags of 12 cod taken, Hendon Promenade saw similar bags with the better fish around 5lb. When the sea was at its heaviest the shelter of the Wear at Rathouse Corner produced big bags of smaller cod around the 1lb to 2lb mark plus big specimen whiting. Sport has however generally been better in the North of the region, but the large numbers of summer cod which have been evident just offshore this year seem to be moving Southwards of the Durham beaches with fish to 4lb reported from the Hartlepool piers, and low water marks. Washed out weed is always a problem at this time of the year but if you can avoid it then most anglers seem to have picked up at least a few smaller cod amongst the whiting, flatfish, and if you are fishing the beaches, the odd small bass.

Roker pier has fished well for cod and various mixed bags of whiting, coalfish, pollack, and flatties. South Shields has seen similar results with a few more bigger cod to 6lb reported, and bigger numbers of coalfish. The Tyne is full of fish at this time of the year but you need fresh crab bait and a bit of luck as to your choice of fishing mark. Double figure mixed bags have been reported from all parts of the river, but typically most sessions have resulted in mainly smaller fish. 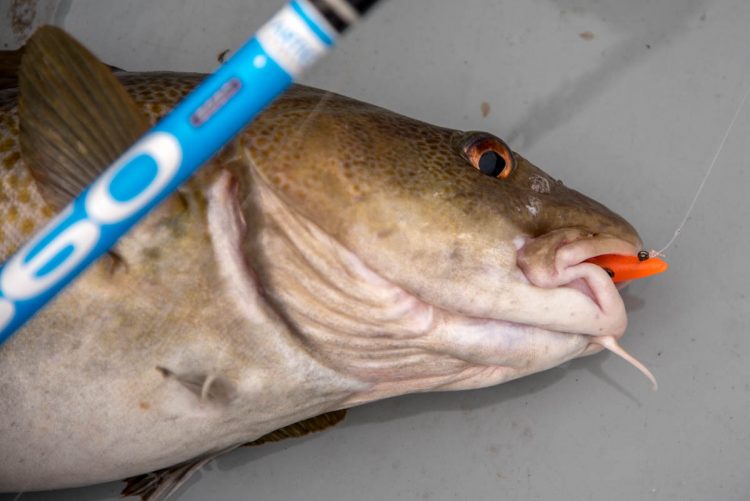 The last Whitley Bay Summer League match saw Geoff King win with three cod for a total bag of 6lb 3oz, the best weighing 3lb 3oz, taken at Craster. Their first Winter League match produced a nice winning bag of 11 cod weighing 18lb taken by Chris Stringer from the prolific Whitley Bay beach which always seems to fish well in a south easterly sea. Dave Craig fished the shelter of the Middens in the Tyne to take six cod for 9lb 10oz and Gary Wilson had the heaviest at 4lb. Nigel Howitt had six cod totalling 11lb 4oz to win a Blyth match just ahead of B. Smith with seven for 10lb 4oz. Dave Crudace had three cod weighing 7lb 11oz to win a S.B.R.A.A.C. match at Collywell Bay. Bedlington Station had a good weigh in with a heavy southerly sea producing 44 fish weighing 80¼lb. G. Sidney had the best bag with four cod for 14lb 7oz.

In a Tynemouth Winter League match all of the top bags came from Whitley Bay where Gary Appleton won with four cod for a total of 8lb 14oz, the best at 4lb 14oz, Alan Woods had three weighing 8lb 11oz, and Steve Potts had three for 3lb 3oz. Another match saw Tony Anderson win with four cod weighing 7½lb. As the sea dropped away the lower Tyne produced a 10lb 3oz winning bag of 10 whiting, two cod, two plaice and two dabs for Phil Smithson. Dave Scrimgeur had a similar bag for 8lb 6oz.

Dave Delaney won an East End match with five cod for 7lb 7oz from the Tyne. Across the river P. Wastell won a Cleadon match with a single cod of 5lb 1oz. The Ryhope Sunday match saw 52 members fishing, most of whom managed to catch at least some whiting with a nice swell running. Paul Richardson won with two cod, two flounders, and a whiting weighing 1.87kg, he also had the best flatfish of 0.625kg. Chris Hossack had a cod and a whiting for 1.77kg, his cod was the best round fish at 1.55kg. Gary Taylor had six whiting totalling 1.55kg, and Ryan Taylor was top junior with four whiting for 0.83kg. Lots of coalfish where taken on Roker pier during the match, mostly just undersize, but Peter Morgan had two specimens both around the 2½lb mark.

Boat anglers have suffered in the heavy seas but the Sapphire out of Sunderland did manage to get out for a trip which produced masses of mackerel plus cod and ling to 5lb from the offshore marks, moving close inshore just off from the High Drum to avoid the mackerel was a wise choice that produced good numbers of cod around the 4lb to 5lb mark with the best just short of 10lb. A clear indication that the cod are now moving very close inshore and within reach of the shore angler.

The Bedlington Station Mini Night Open is on Saturday October 10th fishing from 6.45pm until 10.45pm between Tynemouth pier to Amble pier, excluding all rivers and piers except Blyth pier. Basic entry is £12 all in which includes a complimentary cooked supper for those who return to the weigh in. First prize is £250 for the heaviest bag, £100 for the heaviest fish, plus raffle prizes. Register at the General Havelock, East Sleekburn from 4.45pm until 5.45pm. As per the law, edible crab and cart bait is banned.