Having cancelled 3 days afloat a week earlier because of the high winds a more settled forecast for the last weekend in February was greeted with a very thankful smile. With the tides once again on the large size any thoughts of a venture out to Holyhead Deep were swiftly dismissed and inshore Holyhead was the order for the 2 days. 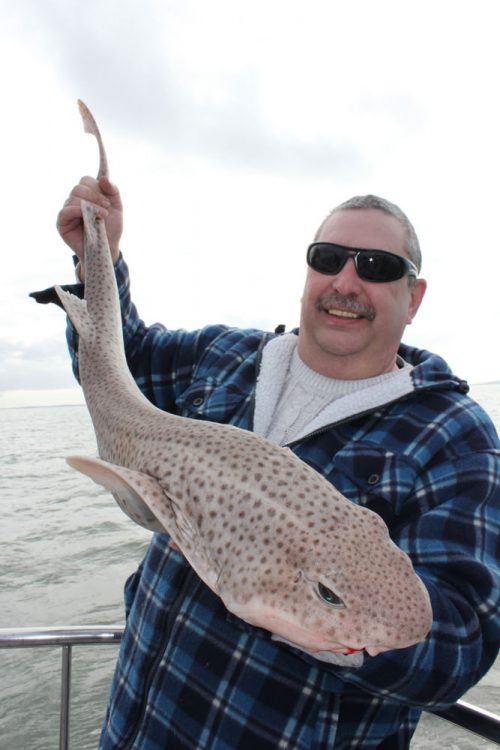 Saturday’s crew of regular My Way anglers were looking forward to the craic and laughs as well as the fishing. Pete ‘chilli’ Chant and company were all eager to get afloat, catch a few fish and have a good giggle at each other through the day. The fishing was fairly consistent for a cold February day and dogfish, small huss and small codling, similar to 2 weeks ago, were making up the bulk of the catches.

Among the winter regulars. the anglers also found coalies around 2lb in weight and a few decent sized whiting.

Pete though decided to go one better than everyone aboard and landed a very nice inshore ling, the ling went un-weighed but was estimated at around 4 to 5lb.

Pete also showed the other guys how to lure a better bull huss than the small pups the rest appeared to be catching.

The Sunday forecast was giving a little more wind, as everyone called in on the Saturday evening I relayed our exploits from that days fishing and confirmed a good day afloat was on the cards for Sunday, albeit with a little more wind.

Sadly, on arriving at the marina it was clear that we had a lot more blowing and within an hour of sailing our wind speeds had increased to around 20mph with gusts nearer 25!

Never the less everyone tried hard to catch, despite the conditions but in complete contrast to the previous day was proving very hard, with even the dogfish playing very hard to get.

Everyone soldiered on, however only a few dogs and small codling were recorded. Towards slack water I wanted to move a few miles out and try our luck for bigger huss, but as the wind increased and the boat started to move more into the weather we decided to head for calmer waters.

A few dogs and whiting graced the decks as we enjoyed a bowl of chilli and cuppa, but with strengthening winds, tangling rigs and morale now at low point, we decided to knock the day on the head a couple hours early, saving a few quid for a better day in the future. Beaten but not dejected, we rescheduled a few places for mid-March, fingers crossed the weather gods are going to settle down for us!