Frankie Costello had the fish of a lifetime from the Plymouth shore line last night, here’s his story.

What can I say I’m just buzzing, I have just had my best nights shore fishing session ever. Myself Kevin Keast, his lad and my new hero Les Chown decided to switch from our normal lures and hit the bait tonight hoping to find a few cod or a decent eel.

We were lobbing out huge baits, cocktails, whole squid, herring you name it, but it was slow going. I had the only fish of the night a small strap eel before Kev had to leave and Les and I decided maybe a change to the river would be the way to go. First cast Les’s bait is picked up by a big eel and as he is playing the fish Les says that he thinks our lines crossed so we line danced until Les says that all is clear. 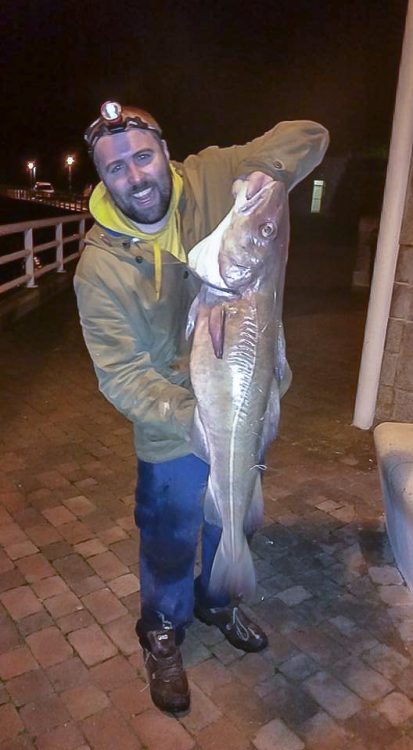 I said, “hang on a minute we’re still crossed I can feel the fish kicking”. Les states that we can’t be and I realise that I have a fish bouncing away. Soon we had two double figure eels side by side, mine about 15lb and Les’s fish around the 20lb mark. We took a few photos of them in the water and banged the baits out again.

Les soon had a second eel about 7lb and as we were yapping and Les sorting his fish my rod crashes off its rest. I reel into the slack and there is a very good fish on the line. Les asked if it felt better, I said, “defo mate, much better”, thinking that I had a much bigger eel hooked up. As the fight progressed the fish just kept hanging deep. I let him do what he had to do and tried my best to keep him under control. Les says to me that he doesn’t think it’s a conger it’s staying to deep. 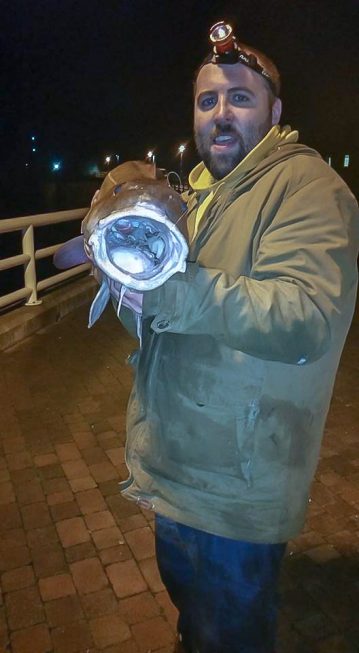 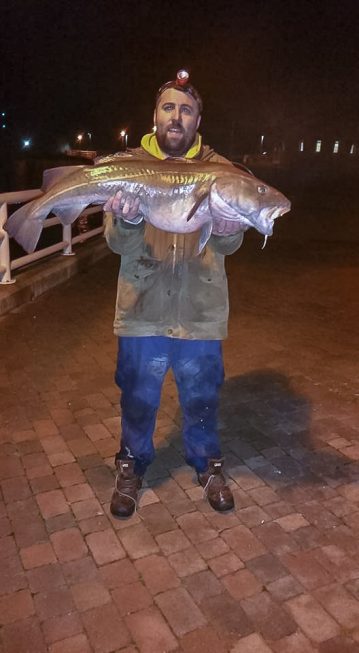 I still thought it was just a bigger eel. This fish was so strong it had my Conoflex Scorpion bent double banging and head shaking all the way. Still we can’t see this fish les is saying no way it’s an eel unless it’s a monster. After some more violent bangs and knocks, Les spots it. What he said I can’t repeat but it involved the “it’s a %£#@ cod” phrase. I look down and I just could not believe what I was seeing. This fish was huge far bigger than any cod I have ever seen before.

Les looked at me and said that’s the fish of a lifetime right there. The next part of the story was crazy and a bit of a blur it involved snapping an old drop net, lines breaking and all sorts of chaos before quick thinking Les runs to the van behind us grabs a bit of pipe and fashions a gaff with his bare hands. Between us, with Les’s makeshift gaff and the line we manage to get the fish and the drop net which is now a big tangle with the monster up and out the water safely.

We weigh the fish a few times and we get readings between 22 and 23 pound. This fish just looked huge and after we calmed down and weighed her again, the scales hit between 22½lb and 22lb 5oz, which I’m more than happy to take as the correct weight. What an incredible fish and what an incredible fishing buddy. Les you’re the best mate this fish would never of made it on to shore it was not for your efforts.

Cod From the Beach