Fishing has been top notch since spring; none more so than the turbot which have shown in excellent numbers despite the past couple of years being quiet. A week or so ago after two months of first-rate angling the signs were of a drop off in numbers as expected, but after a ten day lean period the prized flatfish returned with a vengeance on the offshore banks. Visiting anglers have enjoyed sport landing a fish they rarely see in their home waters. Size wise we’ve not seen the bigger specimens but I do think they will come as numbers thin out. What we have seen are plenty of fish over the six pound mark. Anglers also take a slating for taking more than their share sometimes but with the skippers of the visiting charter fleet sending the message out many fish have been returned to breed an fight another day. Maybe, just maybe that is why we are having the success that we are currently having. 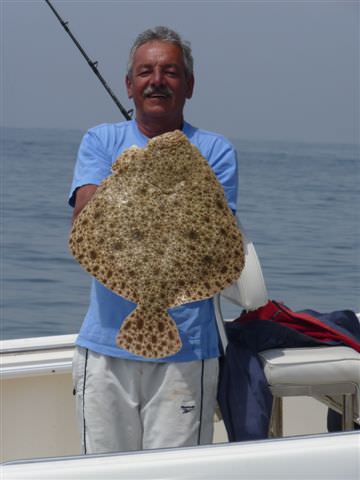 If you are a regular reader of this column then you would know of the problems we have had here during the winter with inshore netting of spawning bass. Also there are other problems which need to be rectified; fortunately we do have a meeting that takes place on the 24th June to air our views to our States members. Hopefully from this and one or two individual meetings thereafter we can look forward to regulated waters to help fish stocks and therefore give a secure future to both our local commercial fleet and that of tourism related fisheries which rely on a sustainable inshore fishery. Alderney is very lucky in that it has the last say on its 3 mile limit.

Staying with the bank fishing, the brill are conspicuous by their absence and it may be that there is not enough room on the banks for both species. They should start to appear in good numbers from the end of the month and run well into September at least. Bass are getting themselves in to gear now with fish to 6lb easily attainable on the banks. Get in close around the rocks and expect bigger specimens. Launce and mackerel are pretty easy to find most of the time and make an idea bait for these silver torpedoes. One or two blonde ray are being caught as well whilst drifting on the smaller tides, adds to the confusion when hooked as the angler is hoping for the turbot of a lifetime. If you are on a boat whereby the skipper is prepared to anchor then give it a whirl, plenty down there if you can get through the doggies.

Moving away from the banks there is plenty of frenetic action with the tope. Plenty in the 20lb to 45lb range with reports of fish up to 60lb caught. Best bait again is a live bait but fresh flappered mackerel will also produce. Put on a bait that is too small and it is very likely you’ll meet a bull huss. We see plenty of double figure fish and this last month has been no exception. If you are ambitious it is always worth a go for the porbeagle which show up around the Islands.

Wrecks have been producing well when fishing for pollack; still some good fish to 17lb caught on the wrecks in Hurd Deeps. Slack tide drifting with fresh mackerel is likely to result in a decent ling or two. Cod are well off shore in the Channel and are worth targeting on the trip over to Alderney in the visiting vessels.

Kayaking in Alderney is following the trend in the UK and proving popular here as well with several of us owning now a piece of plastic. Alderney is not a place for the faint hearted but given some knowledge of the waters and of course the utmost regard for safety it is proving to be very enjoyable and rewarding. The local guru in the ‘yak at present is Dicky Smith who during a recent session with jellies had ballan wrasse of more than 6lb, several bass to 4lb, as many pollack as he wanted in addition to massive mackerel and garfish to 2lb.

Shore sport is improving all the time. Still waiting for the mixed species that should start to appear in July but we are seeing bass increasing in numbers with fish taken on spinners, plugs and fly. The fly fishing is getting ever more popular as the stealth approach is a real challenge to anglers and of course the sport can be phenomenal. As usual the bigger fish will come to baits fished on the bottom in the harbour. Thick lipped and golden grey mullet are all over the place with good reports of shoaling fish. Again easiest place to locate and catch is in the harbour area. The pollack fishing has been great, with the fish now starting to congregate inshore along with the mackerel and gars. Double figure huss have been caught at night with the best rod catching five during one session. Congers are also showing when aiming for the huss with fish into the teens. A surprise brill caught too whilst a local lad was trying his luck with a mackerel bait on an 8/0 hook.

Thanks once again to those of you that have sent in letters of support to try to push the conservation side of things here. Also many thanks to the many of you that visit and plough your hard earned money in to Alderneys economy, it is much appreciated by the many guesthouses and hostelries.