Cahirciveen Sea Angling Club hosted a special 50th Anniversary competition during the June bank holiday weekend. Over 40 anglers travelled from all over Ireland to take part in this, what proved to be a special, event. The competition was advertised as being different; weather permitting anglers were promised that the boats would travel away from the ground normally fished in competitions. The venue would either near the Blasket Islands; out for bluemouth haddock or to one of the banks a few miles off the Kerry coast.

The weather turned out to be absolutely perfect and most skippers went to the Wild Bank, about three-quarters of the way between the Blaskets and Cahirciveen. The fishing proved to worth the long journeys (some boats didn’t arrive back in the marina till 19.30 hours). All anglers enjoyed superb fishing with over twenty species being caught. Main targets were coalfish, cod, pollock and wrasse with most anglers filling their quota on these. The skippers put in special effort in trying to get us to the best ground, setting the drifts again and again over the marks and therefore providing us with the best fishing Cahirciveen has experienced for a couple of years. 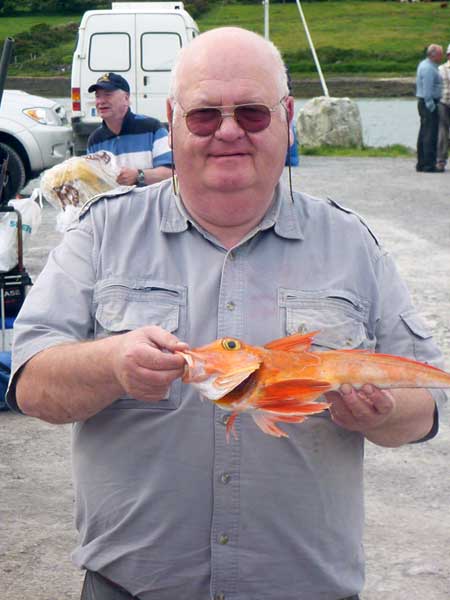 The BBQ provided to all anglers by the Anchor Bar on Saturday night was enjoyed by everybody after a very long days fishing.

The skippers’ prize was won by Adrian Hanley of the Wey Chieftain. His anglers managed an average score of 373 points over the two days.

Many Thanks also to all the sponsors, especially the Kerry Coast Inn, The Killarney Heights Hotel and Des O’Connell of Kerry Sea Angling Charters. The prize table was impressive and events like this could not be fished without generous sponsorship.