Fleetwood and District Angling Club fished a match last Sunday over low water at Cleveleys where expectations were high given earlier catches. However, the fishing was poor with only a few small tope and smoothhounds, one dogfish and a couple of whiting.

Of the eleven anglers fishing only six caught fish. Strangely crab did not do much, most fish were caught on worm, both black and ragworm, and squid also worked.

2nd Kevin Blundell a smoothie and a tope – 53 points

3rd Bob Egan one smoothie and a whiting – 35 points

5th Ken Forrest a dog and a whiting – 26 points

Christopher Russon took his lad William fishing and he had a flounder, a plaice and a weaver, his first fish. Dad had a good smoothhound. 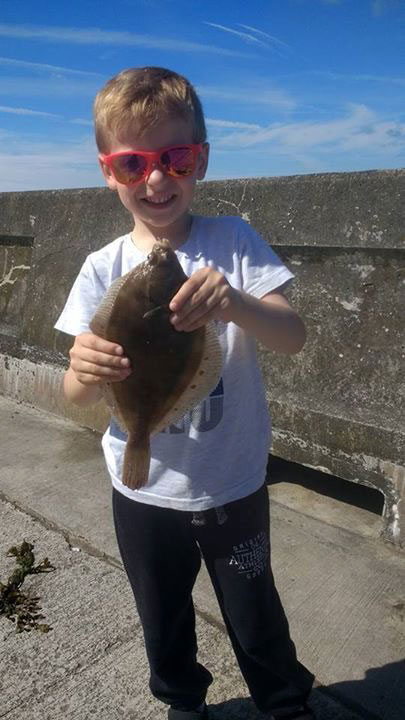 William with his plaice

Terence Gargan offered to take Derick Simpson on a boat trip and with both available for the good forecast they headed off at dawn for Morecambe. They arrived half an hour before high water, launched for Throbshire Chanel on a calm, warm but misty morning. The first hound picked up the crab bait on a 3/0 legered circle hooks. There followed a steady stream of fish over the side, ray, hounds, plaice, tope pups, and the dreaded doggies.

The main aim of their trip was to get a decent bass each, anything around the 4lb mark, and return the rest if any caught. Four hours into the ebb they headed towards the bass mark and tackled up spinning rods with Sidewinder sand eels bought from Shane’s shop. Derick was soon into a good fish of 52 centimetres which he retained as his fish of the day. Soon after Terence had a massive take which resulted in a fish of 5lb+. After that they had a few smaller bass all returned safely. As the tide flooded a large mass of sandeels appeared, thrashing the surface and bass all around they. Despite the obvious feeding fish none were hooked. The hounds came back on the feed together with with a surprisingly large dab. They then headed towards the Stone Jetty where they had plaice, small flounder and a sole to end their day with a glorious sunset.

John Brunker and his mate Darrill fished with black worm from Jordan Russell’s shop and landed tope, three sole and a bass, with most coming on the flood. 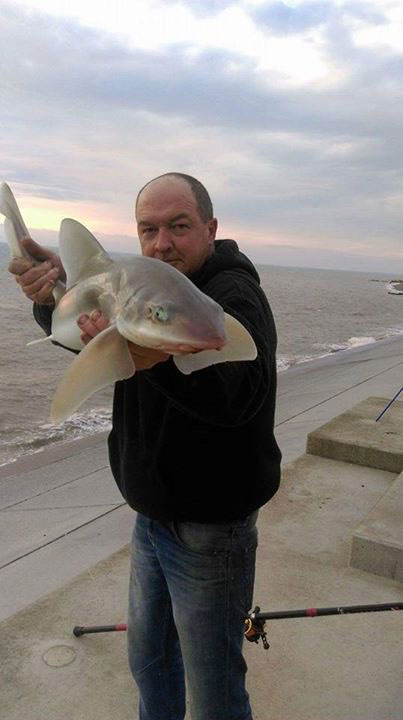 Martin Foxcroft with a smoothhound

Paul Leyden from Wyre Boat Angling Club fished last Saturday off Ellmere. First stop at North pier was a bit slow on the last of the flood but it picked up on the ebb. He had a huss of 9lb and tope. Although had several large tope hook they managed to through the hook.

Last Saturday Mick Hodges fished with Jordan and they had an enjoyable session with flounder, bass, tope pups, smoothhounds and a dogfish.

Mark Hits a Double with the Bass