Plenty of fish about the Lancashire coastline with hauls at low water of up to 50 fish a session. Although there are lots of small stuff it looks good for the winter. Dogfish and whiting are still the most prolific species caught but the last few days there have been a lot of bass showing. Mainly schoolies but among them there are a handful of good sized fish.

The codling are about but still not in great numbers. Some anglers report a few at Clevelys and Rossall. Sole are still coming out off the wall. The baits at the minute still seem to be ragworm, black lugworm, squid and mackerel.

Martin Foxtrot fished behind Rossall school last Wednesday where it was dogfish every cast. There were also plenty of whiting and dabs about and all fish took a 3/0 pennel rig.

Pier club member and bailiff David Playforth landed a cracking bass on a whole mackerel off the north side of the pier. 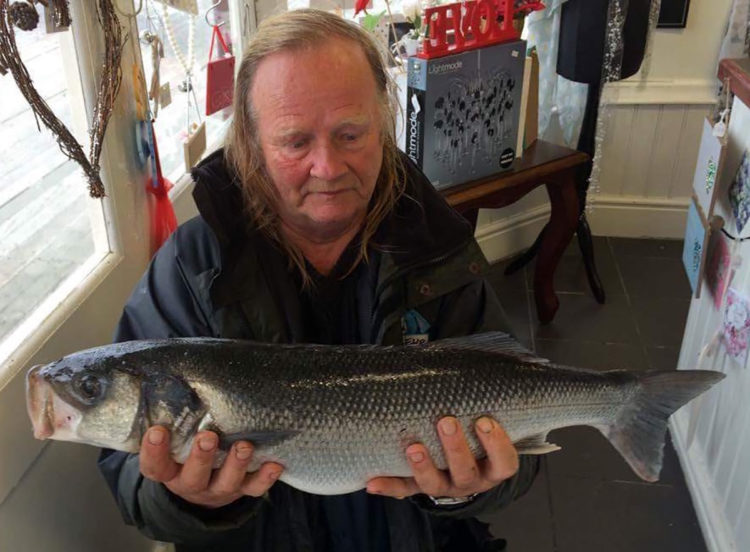 David Playforth with his pier bass

Last Thursday Dave Brown also started fishing at the school, being unable to find space at his first choice mark. After four casts and three dogfish he moved to the 5-Bar Gate and found a lot more fish. He had regular double shots, mainly whiting and a few dogs.

An hour after his phone died he had a better bite and was into something moving into the tide. When it was beached on the shingle it turned out to be a 4lb 4oz thornback. Dave was gutted that he didn’t get a picture but was happy to watch it swim away strongly.

Brian Leigh fished the Gynn Wall on the 19th after his plans to fish Morecambe over high were scuppered when an accident blocked the M6.

A visit to Jordan’s shop saw Brian and mate John sorted for lug and rag and they joined the regulars on the wall. They both opted to fish close in with flapper rigs and soft size 4’s to aid unhooking. Small pieces of worm on the hooks was the order of the day.

The pair fished a friendly match on the basis of the winner having the longest sole. John was however, not playing by the rules, he was using a three hook rig. I pointed out that the rules specify a two hook maximum. However, the boy persisted as he was intent on winning!

Cut a long story short, it was a fish a chuck with quite a few double headers. Some half decent whiting, dabs, plaice and the obligatory doggies kept us entertained. No sole landed so no winner on the day.