Nathan Pickering fished last Saturday and reports that after picking up bait from Bispham Angling to augment some frozen crab that he had from the previous winter he headed down to Cavendish Road. The tide was well out but had a few chucks while being cautious of the tide coming around the back and filling the gullies. Nothing but small bites although his Uncle lost what seemed a good fish and he snagged a tree. The water finally reached the Wall and he experienced lots of rattling bites before his Uncle landed a sizeable hound followed by a double figure fish to a neighbouring angler. Nathan then beached and nice fish of around 8 or 9 lb before losing another.

Jason Usher and Dave Brown were back out over the weekend covering low and high tide. They both managed smoothhounds to 15½lb. All the fish fell to fresh peeler crab and were safety returned.

Christopher Russon reports he hadn’t fished for a while so was itching to get out last Sunday. Chris fished the Gyn Wall and caught a weever and a tope pup. The fish were caught on pulley Pennel rigs baited with fresh blackworm.

Martin Holroyd reports last Sunday that he Fished high tide at Cavendish rd and was plagued by weavers had a little gurnard, worth a few hours out.

Andrew Riley fished a Club match at Greenodd with 16 members, they fished one hour up and three down. Plenty of flounders and eels were recorded after a slow start. Andrew had had three fish in the first two hours before moving to the barrier at the car park where he added a further eight fish to win the competition with 334cm. The runner-up had 328cm and the longest fish was a flounder of 41cm. Andrew had most of his fish on lug tipped with crab although lug, creeper and rag picked up a few. 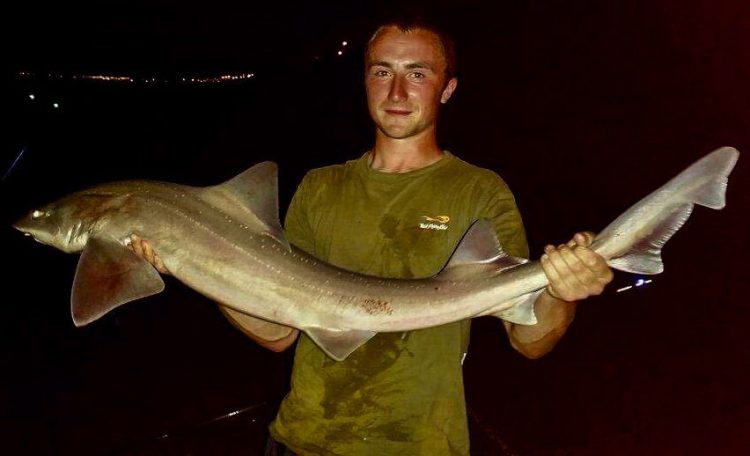 Joe Green landed the biggest smoothhound recording in the shop this year, weighing a massive 16lb.

Last Saturday night Rick Pennington fished with best pal John Carden at the Gynn again on the late night shift, John will certainly remember this session for the unusual end to the night.

Set up about 11 pm and they were fishing a pair of rods each, one scratcher and the other with big baits. It started off very slow as has been the form on Gynn during last 2 weeks, they had a couple whiting and a weever and were starting to pack up one rod at 3:30 am when John’s rod flew out of the rest like a javelin. Luckily he had a tip light on and rod was floating although being pulled out to sea and towards north pier at a rate of knots. Rick wound in quickly and managed to cast over the line and pulled it in and back up the wall. He started to reel it in with fish still attached, walking back to the steps towing it just a few feet from wall, where he passed it back to John who had gone down to try get rod rest off the slope.

Biggest surprise for the pair is that it was a fairly small smut, 5lb tops. Rod didn’t seem any the worse for wear luckily, although the reel will need a full strip down. Lesson learned, never forget to set the ratchet and drag!