Five-Bar-Gate is still producing fish, not as many as the Wall but certainly a better stamp of fish with rays to 8lb being caught on fish baits. The Gynn Wall producing the plaice, flounder and dabs with the odd dogfish on the night tides. The boats have also started to produce quality bullhuss into double figures again on fish baits. 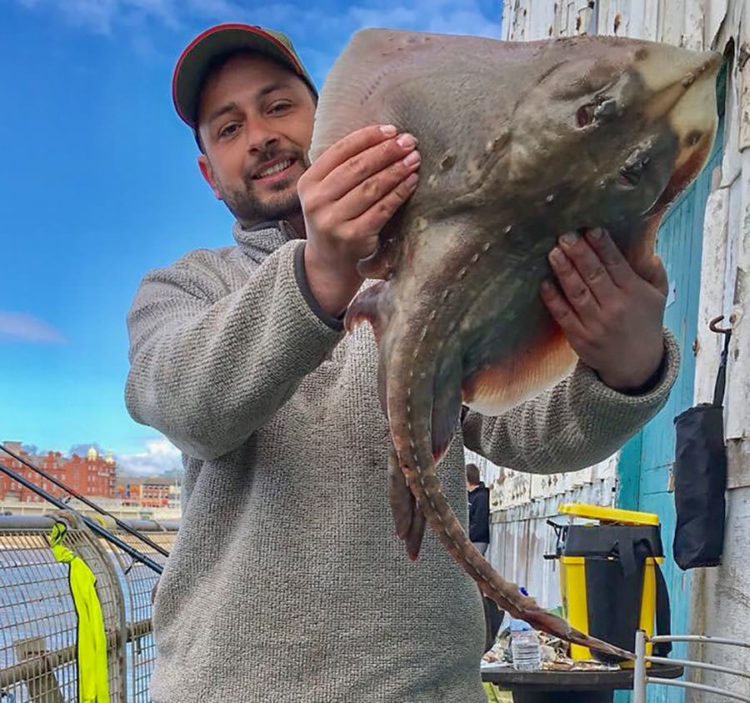 Ben with his first thornback

Leyland and District Sea Angling Club ventured afield last Sunday to fish their latest roving match at Morecambe. Despite the wind and rain the venue produced some decent fishing with black lugworm, bluey and prawns the successful baits.

After Blackpool Boat Angling Club member Jonathon Hall watched the weather all week and carried out repairs to his trailer the weekend rolled around. The boat and more importantly the weather was fit to head off for the first trip of the year to search for an early bass in Morecambe bay.

Jonathon launched at about 9.30 with his crewman Pater Fellows, his father-in-law. They were joined by Neil Whittle & Owen on Sundayz, Wayne Forshaw on Son of Cod and Peter Marshal and Derek on Solo for the exploratory trip.

The run over to the Bay was just perfect with flat calm seas and glorious sunshine, just perfect, you don’t get many days like that in a year. After a run of about an hour they arrived at the first mark expecting to be in two to three feet of water the mark had completely changed with the depth now about 18 feet. The anglers had to look for an alternative mark to find a shallow bank. After a short five minutes search they anchored in around five feet of water and started to fish.

It didn’t take long for the fish to show, lots of plaice and dabs two or three at time, the odd whiting and dogfish also showed but none of the target species on this mark. As the tide run picked up the boat broke out the anchor and they decided on a move further into the Bay.

On the second mark, with perfect glass calm seas, they were greeted by a porpoise topping the surface and a seal snoring with it head out of the water.

The first rod was cast out and set then the second rod cast out. Before I had time to put the second rod in the rest the first one was getting pulled over the back of the boat. What a take! 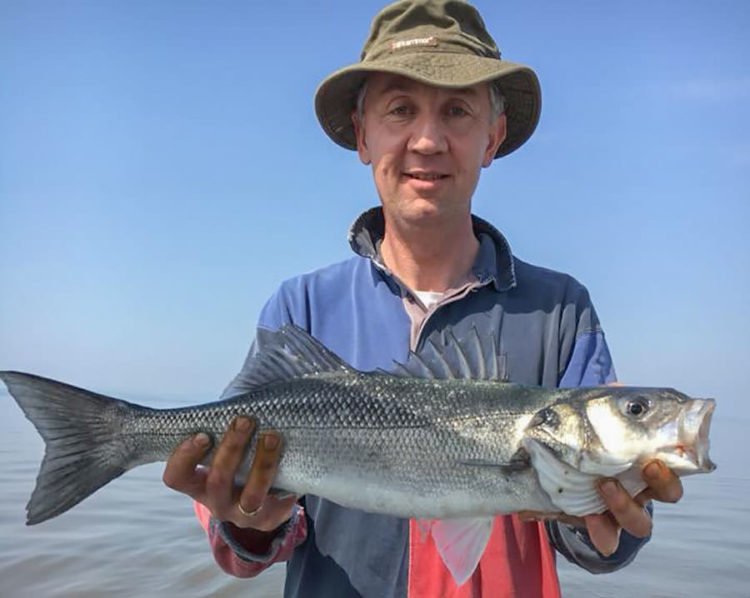 Jonathon with his Blackpool Bay bass

Jonathon managed to get hold of the rod before it disappeared over the stern. This take resulted in a bass of 4lb 8oz netted and returned safely after a photo.

The fish was taken on double black lug fished on a three foot running ledger of 20lb Amnesia terminating in two Pennell rigged Mustad 3/0 bass hooks. Jonathon loves these hooks, they fish very similar to circles and the fish hook themselves every time in the scissors.

This was the only bass for him on the day. His delighted could be heard by the others fishing over half a mile away. They fished to high water then headed back to shore, again in perfect conditions. The lads can’t wait for the next outing.