Another settled spell and water temperatures have warmed up a degree or two as we now head into early Spring. Once again, this week it is all about the thornback rays, it seems like our Thames Estuary is full of them!

Spring is always a great time to head down to the beaches with the evenings drawing out and Summer fish moving back in. A few bass have been reported along with the odd very early sole.

Walton Sea Angling Club headed for the Holland on Sea beaches for their evening match. Hopes were high of a thornback ray or two and so it proved. Top angler on the night was Robert Tuck with 17lb 5oz, his catch included four thornback ray, dogfish, codling and whiting. Second place went to Craig Buy with 8lb 5oz and third placed Lawrence Chisnall had 6lb 1oz. Rob Tuck also won the heaviest fish prize with a thornback ray weighing 4lb 13oz.

The Holland beaches in general have had a good week, especially for those anglers fishing after dark – rays, whiting, dogfish and the odd bass have been caught.

Clacton Pier has also turned into Spring mode with thornback rays showing well along with dogfish and whiting.

The Frinton beaches have also picked up this week with the odd ray now being caught along with flounders and occasional bass.

My trip this week was to Walton Pier to fish an evening tide. I fished the top of the pier and wasn’t disappointed as soon as the light began to fade the dogfish started feeding with bites on most casts. I did manage to land a cracking 9lb thornback ray which I caught on a bluey bait. 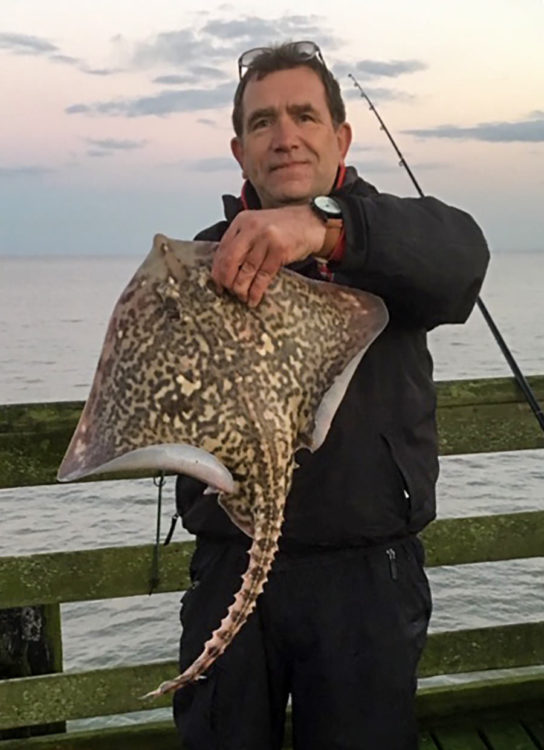 The Author, John Popplewell ,fished an evening tide on Walton Pier and was rewarded with this 9lb thornback ray.

There are still plenty of whiting to be caught on the pier and some are on the large size which is unusual for this time of year.

The Walton Pier Club fished their Secret Pairs Match on the stem of the pier at the weekend, and they were greeted with a cold biting northerly wind which didn’t really help the fishing.

Twenty-one anglers fished, but not all of them caught fish. Top spot went to Dean Parker and Ian Walker, second were Dan Winter and Robert Pobjoy and Chris Oxley and Joe Marvell in third.

The heaviest fish prize went to Dean Parker with an 11oz bass. 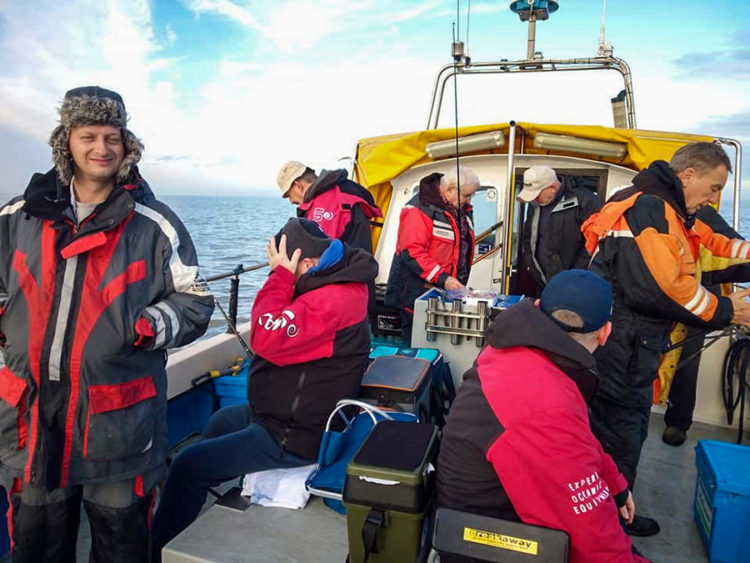 The boats have had a fantastic week, the seabed is paved with thornback rays at the moment!Colchester Sea Angling Club fished a boat match on Chris Moles’ charter boat out of Mersea. Eight anglers fished and they landed 55 rays between them.

The Brightlingsea charter boat Sophie Lea has also had a busy week.76 thornback rays were caught by seven anglers on just one trip with the heaviest ray being caught by Richard Lusher weighing in at a very impressive 17 pounds!

The clocks go forward an hour this weekend to British Summer time so that will show on Sundays tides.

Flatfish to the Fore On Fylde Coast

Codling And Rays On The Lancashire Coast