Just when the fishing was looking up with some good catches of codling and thornback ray, a very cold weather front has hit us. Sub-zero conditions being dragged in from Siberia have hit our coast, and needless to say the fishing has unfortunately taken a dip in form.

Hopefully this will only be a minor setback as Spring is surely just around the corner and with that will herald the first of the bass and eels. Please remember that any bass caught must be returned until we are notified otherwise by the EU Fisheries Commission.

The beginning of the week saw thornback ray appear very close to the Holland beaches. Mick Barclay landed two rays and Jonathan Wheatley caught one around the 6lb mark after dark. Jonathan told me that weed had been a massive problem for beach anglers here which is unusual for this time of year.

Walton Pier has been very quiet with just the odd whiting and codling to be caught; it looks like those thornback rays have moved back into deeper waters.

The Walton Pier Club held their monthly match here at the weekend, 15 anglers braved icy winds and a choppy sea. Conditions looked good for fishing, but alas the fish failed to turn up in any numbers. They fished a secret pairs match, so anglers didn’t know who their partner was until the end of the match. 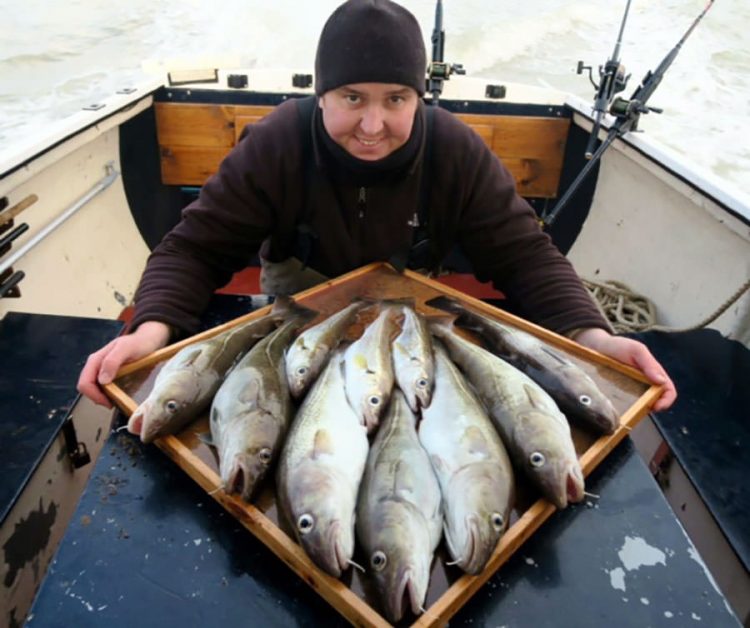 The boats also had a good start to the week with most boats reporting codling and rays in good numbers. Lawrence Chisnall and Phil Wringer fished an ebb tide off the Holland on Sea coast and landed some good size codling and bigger whiting.

Chris Mole, skipper of the charter boat The Enterprise out of Mersea, reported that codling were feeding and his party landed 15 fish up 4lbs plus some good size thornback rays.

The monthly report from the Sophie Lea was very favourable for February. Codling had returned in good numbers with some of the smaller boats reporting up to 20 fish per trip.

It has been a couple of years since codling all but disappeared from the Thames Estuary, so it is great to see their return. The thornback ray have not turned up as early as we saw in the numbers that arrived in 2017. Lots of whiting are still being caught and this is a fish you can always rely on.