18 anglers from the English section of EFSA braved freezing cold temperatures aboard three boats out of Langstone harbour to contest the EFSA England Cod Festival at the end of last month. The competitors were aiming to hook double-figure cod which feature each winter in the waters around the Isle of Wight.

On day one the poor forecast limited the boat to inshore marks but despite the efforts of the anglers only skipper Ross Lindsay aboard the Dawn Venture managed to find the cod. Three cod were landed by three separate anglers with last year’s runner-up Pete Bailey taking the longest of the trio at 86cm. 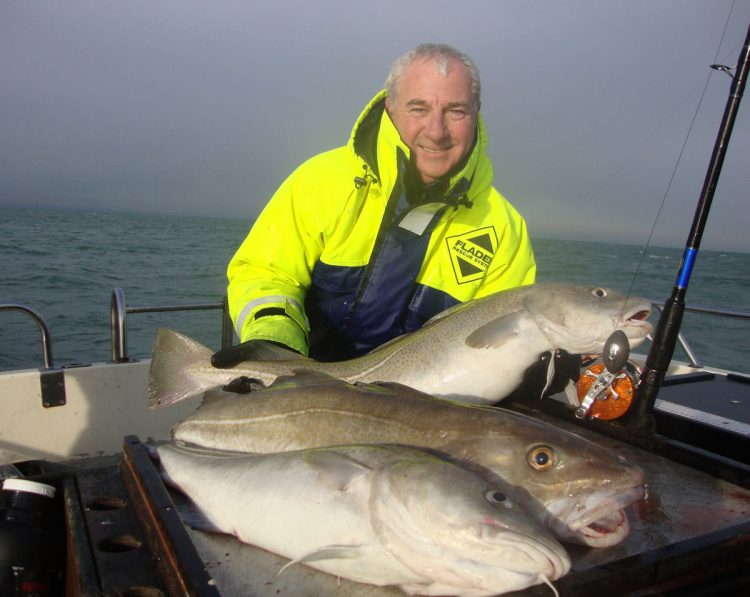 A slightly improved forecast allowed the boats to range further on the second day although they returned to the previous days mark off the Nab Tower where English section Chairman Neil Bryant found three fish for a total of 238cm.

Glen Milligan took his Wight Huntress to the Culver rock area where they managed to find three cod taken by two anglers. Predator with Laurie New at the helm headed past the Nab Tower into some deeper water and this turned out to be a successful move.

Kim Bowden started the day with a small codling and followed this shortly after with a double shot on the pennel rig. His codling and one of 79cm and weighing about 16lb put him well in the running. Colin Searles landed a 15lb fish to add to one from the first day, but Kim added another of 88cm to put the pressure on the rest of the anglers. On the opposite side of the boat Vernon Allen, after losing one earlier, caught a magnificent cod of 99cm estimated at 25lb although the skipper’s scales only went up to 22lb. Vernon followed this with a 78cm cod to jump up the leader board.

Cod came to the other anglers but it was a two horse race now. Kim netted another two fish to reclaim the lead… and with a sixth fish dead on lines up, Kim finished a deserved winner. The final count on Predator was 15 cod with all except two fish over 15lb in weight… a memorable day for all on board including the skipper who had not seen that many large cod on a Langstone boat in day for many years.

Vernon’s 99cm fish took the prize for the biggest fish of the competition.