There was a great turnout for yesterday’s Skegness Pier Angling Club (SPAC) match, held from 4 until 8pm at Winthorpe Avenue. Fifteen anglers turned up to fish the match, including five ladies fishing in the annual Mixed Pairs, which was included within the main event. Competitors were met with ideal conditions of a light backwind, no rain and a perfect sea with a nice lifting swell.

Winthorpe Avenue has been fishing consistently well for most of this year and rods were soon nodding along the line of anglers, with a small whiting to Gary Collins and also flatties coming ashore. SPAC President Alan Steadman was into fish straight away, with a small flounder, followed by a similar sized dab. Then his fishing partner Jessica Thomas pulled in a nice 31cm flounder, to give them an early lead in the Mixed Pairs.

Dave Burr was fishing at the north end towards the Coastguard Hut and soon had a nice dab, followed by a lovely 36cm (1lb 3oz) flounder. Most of the fish were coming out at very close range, which was ideal for a couple of the inexperienced lady anglers and by mid match, everyone had caught at least one fish. Lisa Collins was doing well, showing her husband Gary how to catch, by pulling out a small flounder, followed by a double shot of flounders. At the south end towards the golf course, “hound magnet” Adie Cooper showed his adaptability, fishing a long three hook flapper with a rolling lead at close range, to catch a 42cm silver eel, followed by a flurry of small dabs. His partner Tracy also had a couple of small weevers, so it was “game on” in the Mixed Pairs! 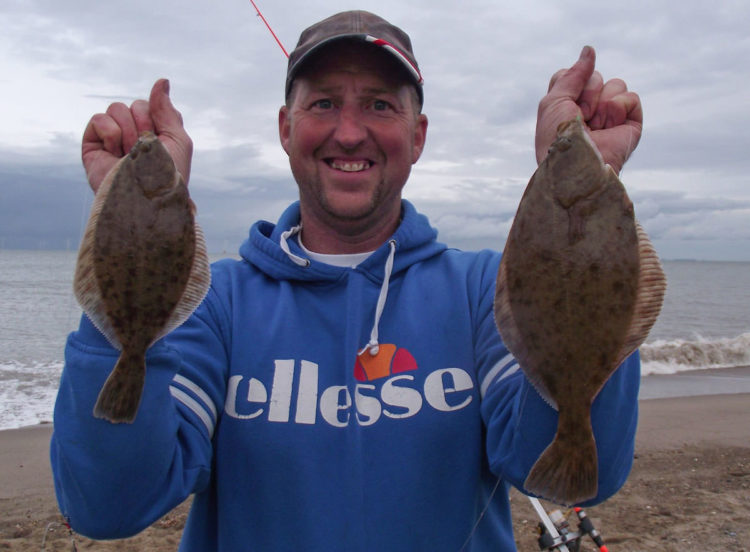 As so often this year in the individual stakes, it was turning into a straight battle between Alan and Adie; although Paul Marshall was catching up fast after a slow start, helped by a triple shot of flatties. Alan had a bit of misfortune, missing a couple of good bites, then losing a nice dab when his line snapped after becoming entangled close in. This was just enough to let Adie in to win the Mrs Wheatcroft Cup, with a mixed bag of 13 fish measuring 307cm in total. Alan finished up just a couple of fish behind, with 11 fish for 281cm. Paul Marshall was agonisingly close to Alan by just 1cm, taking third place with 12 fish measuring 280cm. Dan Jackson fished close to mid range for most of the match, but blasted one out as darkness fell at the end and was rewarded with a double shot of early whiting, taking fourth place with a 10 fish mixed bag for 228cm.

Jessica Thomas followed up her good start by ending up as the top lady, catching six fish for a 143cm total. Close behind Jessica came Michelle Collins, who fished very well to also catch six fish for 133cm. In the Mixed Pairs event, Jessica and Alan successfully defended their title, winning the trophies with a combined total of 3pts. Second place went to Tracy and Adie with 5pts. 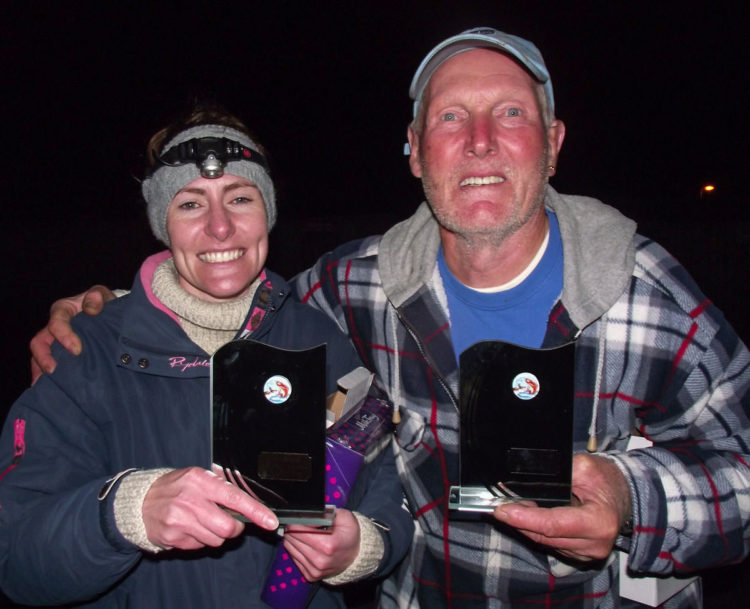 Jessica and Alan with the spoils of their labours

The longest flatfish prize went to Dave Burr, with his early doors 36cm flounder, whilst “angler not a dangler” Bob Foster was in among the prizes again, winning longest round fish with a 50cm silver eel.

All in all it was a very successful match, with pleasant fishing in a good humoured, family atmosphere. As match organiser, I really enjoyed my four hours walking up and down the beach and would like to thank everyone for allowing me to push my camera in their faces!! Also, congratulations to the ladies and we hope to see you all out-fishing the men again! Full result as follows:

The next SPAC match will be held on Saturday 6th October from 3 till 7pm back at Trunch Lane. The match is open to all, with Club Members fishing for the Dave White Cup. With a couple of weeks to go before the match, there should be plenty of whiting about by then, along with the usual flatties, so why not come along and have a fish with our friendly little Club. Please pass on to those not on FB and contact me for further details.