The penultimate Skegness Pier Angling Club (SPAC) match of 2018 was our annual Xmas Fayre match, which was held yesterday evening from 4:30 till 8:30pm at Jacksons Corner. Some matches on the other side of the country had already been cancelled due to the forecast stormy weather. But there is a lot of land mass between the west coast and Skeggy, so although the wind was strong, it was from behind the anglers and the sea was calm.

As usual, the match HQ was the Lookout Pub, by kind permission of my Skegness Lifeboat colleague, Tony Kelly. When I arrived in the Lookout car park just before 3pm, there was already a number of anglers unpacking their vehicles and getting their fishing togs on, with one or two welcome new faces in amongst the usual suspects. So it was quickly into the pub to get myself organised, then I started selling match cards at £10 each – bargain!!

I had been anticipating around twenty anglers, but ended up with 23 booked in, which I’m very pleased to say is our best match attendance of 2018. There would have been more, but a few unfortunately had to cry off due to illness, or unforeseen other commitments. But it was great to welcome new faces Gary Cooper and Brian McKenzie from Doncaster, along with an old friend of mine from Grimsby, Tony Burman.

After working out the prize money allocation, my intention was to go onto the beach to take some action photos. But shortly after the match started, there was a torrential downpour; so I decided not to expose my expensive Canon to the elements and popped home for a coffee instead! Then it was time to load the car to the brim with prizes, along with Christmas cake and mince pies made by my dear wife Sue, before going back to the Lookout to offload everything, while the heavy rain continued to prove an annoyance! 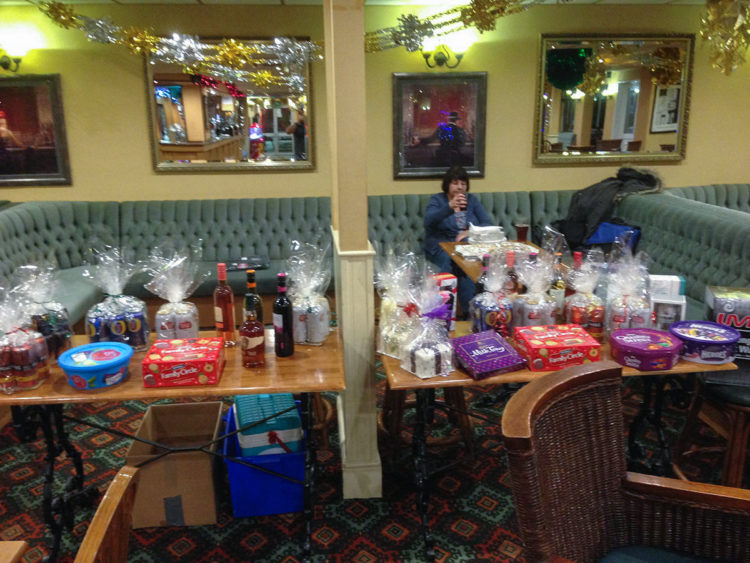 Ready for the prize giving

Back at the pub, Sue helped me to set out the food, along with all the prizes for both raffle and match, as everyone who fishes our Xmas Fayre match receives a prize, even if they blank. Then there was just time for a quick pint, before Jacqui and Russ Taylor arrived laden with hot Lincolnshire sausages, onions, sauces and plenty of bread rolls.

By now it was 8:30pm and a steady trickle of bedraggled anglers were soon coming in to hand over their damp and smelly match cards. It was obvious from the very first cards that the fishing had been good, with plenty of whiting, dabs and a few flounders marked down. Last years winner, Ian Nelson, appeared to be the man to beat again, as one side of his card was full and five whiting had to be marked on the back. Then hound magnet Adie Cooper also turned up with a full card and it was game on! Cards were now coming in thick and fast, so it was a case of ignoring the hubbub going on around me, checking and rechecking the match cards, then working hard to come up with the final result.

By 9:15pm I was satisfied that my calculations were correct and it turned out that Ian Nelson was indeed the winner. Using the strong backwind to his advantage, he had fished at distance throughout the match, using three hook clipped rigs baited with small sections of black, tipped with mackerel. Ian caught at least one fish every cast, with many doubles and trebles, ending up with 35 fish for a total length of 1006cm.

Fishing not far from Ian, Adie Cooper fished totally differently, casting his worm and squid baited rigs just fifty yards out, to end up in second place with 31 fish for 961cm. 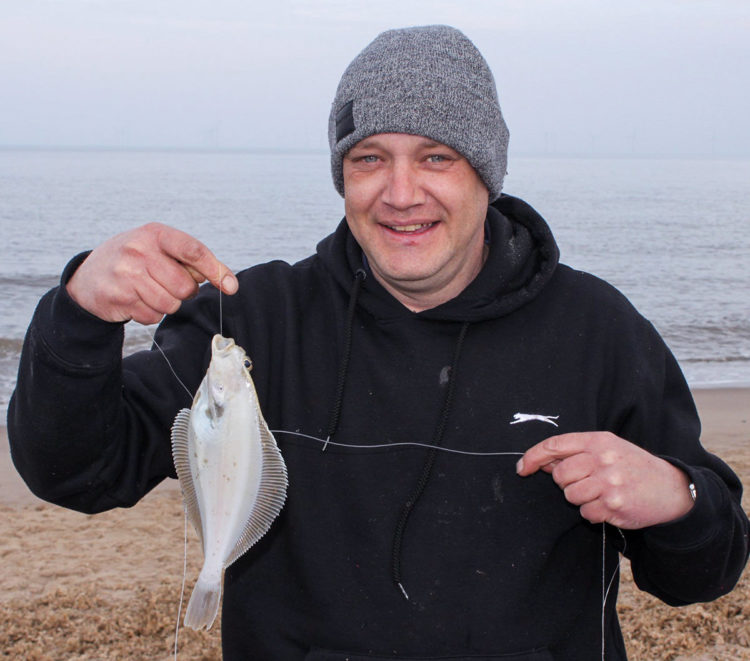 Fifth placed Kev Warner won the longest round fish prize with an unseasonal 50cm lesser spotted dogfish, whilst Steve Brightwell was a very popular winner of the longest flatfish prize, with a 33cm flounder. In total, there were 361 fish caught by the 23 anglers, consisting of 233 whiting, 117 dabs, 8 flounders, 2 rockling and the solitary lesser spotted dogfish. A great result by any standards!

A great match, thanks to everyone that turned out to fish and I hope you all enjoyed yourselves! Also, a big “thank you” to Darren and Anthony of The Lookout for looking after us so well, to Steve Herrick of Lakeside Leisure and Big Catch Tackle for his support, to Jacqui & Russ Taylor for once again providing the sausages etc. out of their own pockets and especially to my dear wife (and master chef) Sue, without whose help I could not manage it all.

The final SPAC match of the year will be held on Saturday 22nd December from 3:30 till 7:30pm at Trunch Lane, with Club members fishing for the Shipstone Cup. The match is open to all, so why not come along and have a fish with our friendly little Club. The SPAC AGM will be on Saturday 2 March next year, so please make a note in your diaries.