I had hoped to get to sea by the middle of February however with the weather remaining so bad I took the decision to leave My Way in the yard, safe and sound while winds up to 100mph pounded Anglesey and much of the UK. It’s fair to say the weather has been atrocious for weeks now, as eager and excited as I was to get afloat and fishing again I was also nervous at exactly what the new season would deliver. 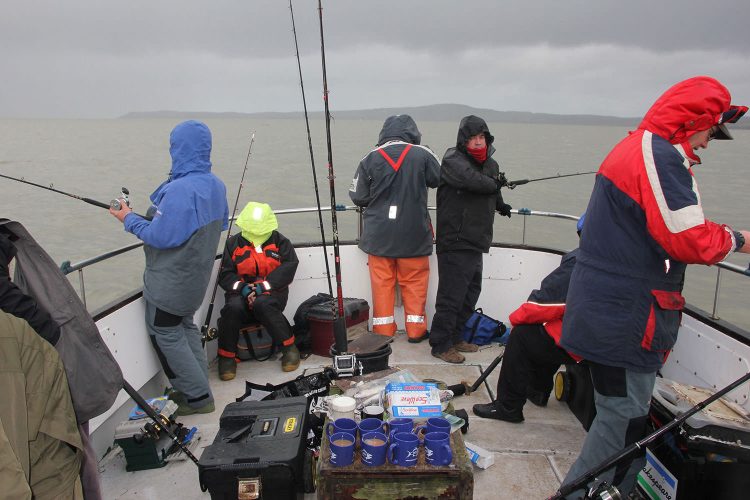 Appropriately it was on St David’s Day, the 1st of March, that I was joined by five regulars, who have become good friends over the years together with four new comers to My Way, all of whom were experienced boat anglers, a nice mix of crew who undoubtedly could pull out a few fish when needed. Although the forecast was reasonable forecast for the most of the day it was due to pick up to a force 6 towards the end and coupled with a 32 foot tide our fishing would be restricted to within Holyhead Bay.

First off was a drift in search of a few pollack, coalies and maybe some herring. Despite a perfect drift, right alongside our rock mark with the breeze slowing the boat down nicely at the end of the flooding tide our efforts returned a big fat zero, not even a bite for anyone on board. The thick brown water didn’t help the situation to be honest, but never the less the lack of fish presence was disappointing.

A change of tactics was called for and I decided to move off to the mussel beds to anchor up, a little early in the day for the 32ft tide, but this was getting critical now. Banter and a few risqué jokes weren’t enough, we needed fish. With the anchor down, we had a good flow of tide and all eagerly awaited the first signs of a fish. With a few false knocks and over exuberant ‘strikes’ it was 15 minutes before the first fish came to the boat. 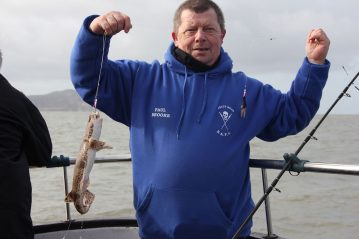 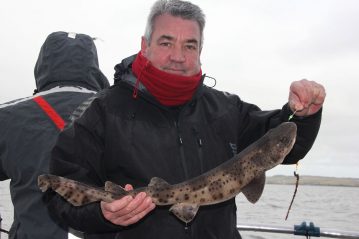 Using his rod and reel with effortless perfection local angler Dave, slowly retrieved his catch whilst everyone else stood in awe at his angling brilliance. After what seemed like an eternity it was with great relief to see Dave lift into My Way the best looking ……. 8oz whiting I’d ever seen before. Rock ‘n Roll 2014, we’re back on the money.

OK, not that exciting, but as most the guys concluded, it’s the first day of March, the weather’s fine and we are out afloat. The fishing remained slow on this mark, with a few whiting, mainly pin size, and dogfish making up the catch. The odd double shot coming over, the first to Cheshire angler Pete Minns, who insisted on a photograph for his scrap book. Brooksy with a little help from his friends soon witnessed a dogfish on his rod. 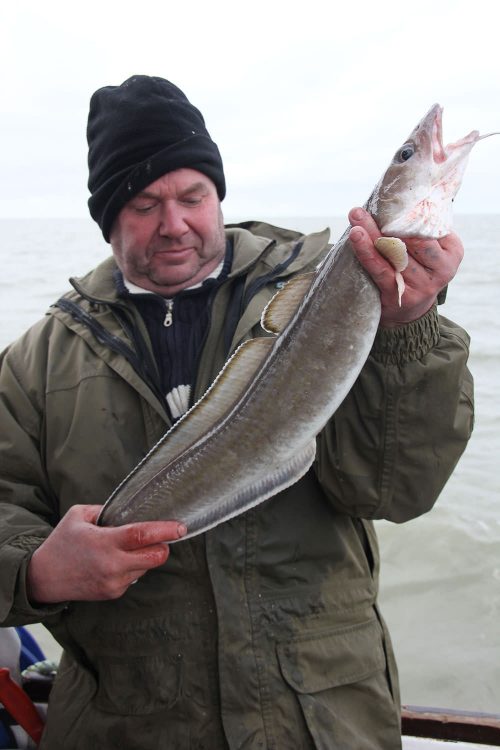 As the tide started to gather pace, making it uncomfortable to fish anymore, we upped anchor and I decided on a move further inshore and try for a few rays. We ended the last few trips of 2013 with an abundance of rays and despite that being a few months back, late February and early March is when we start the new influx of thornies and the odd spotted into the area. Sadly this move didn’t work out, dogfish and a solitary dab were all that showed. We did though enjoy lunch, a big fat breakfast butty is always a good call when afloat. More so on a cold early spring day and naturally washed down with plenty of tea or coffee.

The anchor was hauled again, and this time we headed to a muddy area around a mile outside the harbour. The tide had slowed down sufficient to allow a fairly reasonable fish for all aboard. This mark soon had everyone who pulling out a few fish, the vast majority being dogfish and better whiting. We managed a few double shots, of dogs and whiting but no triples of these obliging early season fish. The LSD, whiting trend was broken on a couple occasions by small bull huss and a welcome if surprising ling.

The day passed quickly and it was great to be afloat with a few fish and a few laughs with friends which together with food and drink made for an enjoyable return to sea. Fingers crossed that we are now over the worst of the weather and the UK angling industry can get back on track.

2013 was a great year aboard My Way and I’m looking forward to better times through 2014.