Not to be outdone by his father, Welsh International, Rod Adamson, 13 year old Rod Adamson Junior landed himself a 14lb 3oz spurdog when fishing for conger off the coast of Anglesey.

Rod went out for a fishing trip with his two boys and a group of friends on Saturday 17th March on the Morgan James, skippered by Andrew Owen, from Caernarfon Bay into the Saint Georges channel. It was a cloudy day, and a flat sea with few waves and the group were targeting for conger eel. 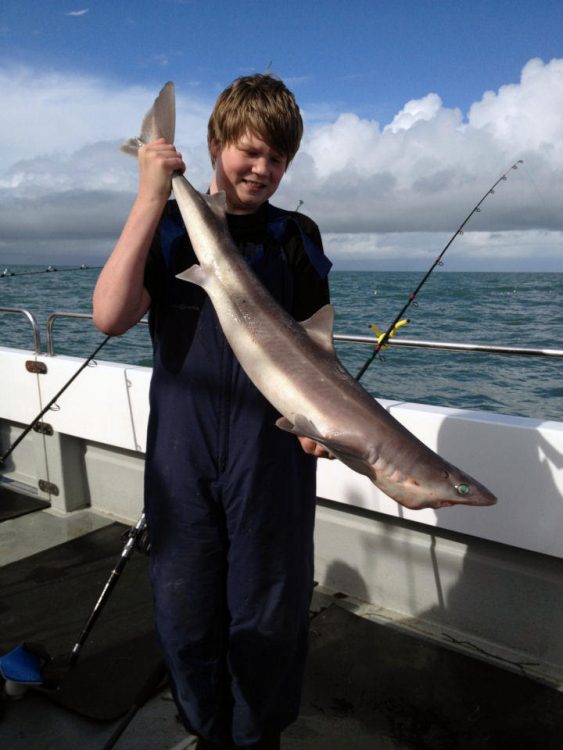 Using an Abu up-tide rod, Abu 7000 reel and whiting and mackerel for bait, after an hour of fishing, young Rod realised that something other than an eel was mouthing his baits. He decided to switch to smaller baits on his hooks, and as his rod bent, Rod held on tight and fought with his dogged catch for 10 minutes. The skipper opened the stern boat door, and Rod grabbed his catch by the tail and dragged it onto the boat to be presented with a magnificent 14lb 3oz spurdog.

Rod senior said of his son, “My boys never cease to amaze me. The average weight of a spur in this area is 10lb, so to catch a 14lb plus fish is a fantastic achievement, especially when we weren’t even fishing for spurs. I am sure my boys are out to put me to shame.”