The monthly report from the Brightlingsea charter boat Sophie Lea has been very promising, plenty of medium size hounds being caught providing great sport on the right tackle.  Hermit crabs are the top bait.  The bass have also been feeding well with fish of all sizes being caught on worm baits and dead baits.

Tope fishing trips were run but no fish were caught.  Still plenty of thornback ray although the bigger rays seem to have moved further out to sea. Lots of mackerel about but they are in deeper water. The charter boat Gloria B2 reports plenty of smooth-hounds with a few around the 14lb mark plus bass and rays.

The beaches have once again had a pretty good week, St Osyth is producing bass, eels and one or two thornbacks.

The catch of the week has to go to 12-year-old Baily Coombe.  He fished on the beach beside Walton pier on the ebb tide.  Baily caught and landed a cracking bass estimated by local Meta-lite tackle shop owner Richard Holgate as upwards of 7lb plus. 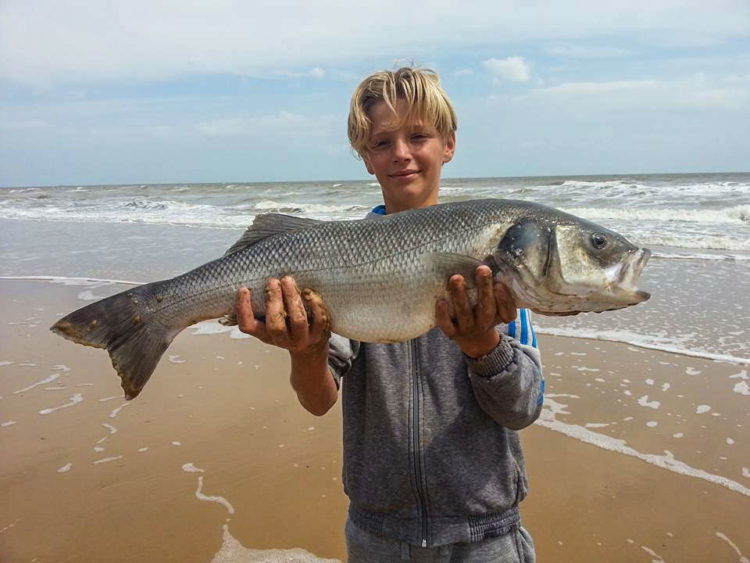 12 year old Baily Coombe with his estimated 7lb plus bass

The areas either side of the pier regularly produce a big bass or two as they feed under the vast expanse of pier piles.

The rocky breakwaters around the Jaywick beaches are still throwing up bass on the evening tides. No need to cast very far as most fish are at around the 50 yard mark, some sole are also showing here to ragworm baits.

Clacton Pier has seen bass in the 2lb range plus a few thornback rays. The Holland beaches have yielded a few early whiting after dark plus soles and bass. 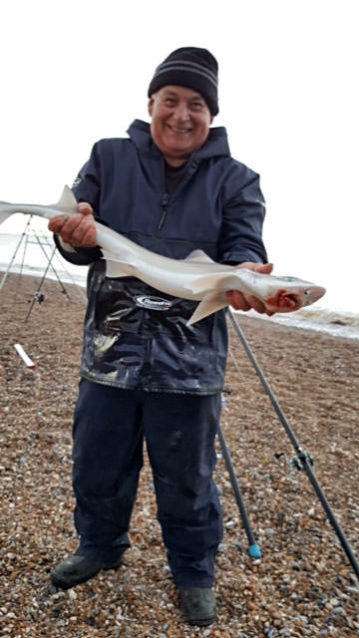 Walton Sea Angling club held their July match on the Frinton beaches.  They were greeted with a strong north easterly wind which made conditions difficult, but the fish were feeding.  School bass, eels, flounders and one large sole were landed. First place went to Rob Tuck with nine eels and five bass weighing a total of 4lb 14oz. In second spot was Doug Sadler with seven fish for 3lb 14oz and third placed Vic Pearce had four fish for 3lbs. The heaviest fish prize went to Vic’s 1lb 7oz sole.

The Club’s next match is at Walton Pier on August 1st.

Walton Pier has had another good week with some rays from the head of the pier.  Fred Gibby fished an early morning tide here and he landed two smooth-hounds to 7lbs on crab baits.

Colchester Sea Angling club headed for Suffolk and the Dunwich beaches for their monthly match. They fished a late evening tide on a clear dry evening, 13 anglers fished and they caught lots of small smooth-hounds, bass and soles.

Top spot went to Mark Sessions with 8lb 8oz which included the heaviest fish of the match a 5lb 3oz smooth-hound. Runner-up Steve Yallop  weighed in 6lb 8oz, including the heaviest sole of 1lb 3oz and third placed Chris Mills had 3lbs. Their next match is on the Aldeburgh beaches Saturday August 5th, meet at the Aldeburgh Shell for 6.30pm