This week has seen some of those summer heavyweights arrive to our coast and the shore anglers are catching them. Once again St Osyth beach is the place to be where reports have been coming in that the stingrays have arrived. These giant rays normally arrive in May and stay in our shallow waters until the end of June before heading out to deeper waters again.

St Osyth beach always seems to be a holding area for them and I have had 3 rays reported to me this week, the largest being caught by Alresford angler Gale Light with a cracking ray of approximately 50lbs. Alan Dipper who lives in the village managed to catch two on consecutive casts, both were small rays, but still a great achievement. If you fancy a chance to catch one of these rays the best baits are ragworm or peeler crab, the evening tides are best after a warm day as these creatures will move in onto the warms sands on the flood tide.

Clacton Pier and beaches have slowed down slightly this week; the thornback rays that we have seen in recent weeks have disappeared, with only one or two being reported, and the odd bass and codling has been caught. Still plenty of whiting, it looks like they will still be here till the autumn! The Holland beaches are fishing much the same as the pier, after dark will increase your catches. The Frinton and Walton beaches are fishing much better this week with bass and soles now showing and one unconfirmed report of a stingray being caught and returned. 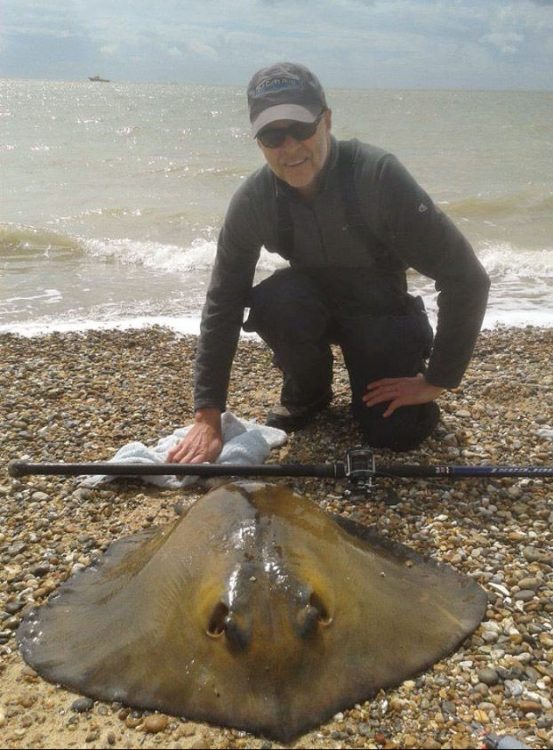 Clacton Sea Angling Club headed for Walton Pier for their latest evening match and on a flooding tide 15 anglers fished and the tactics were to fish down the side of the pier for the smaller fish. 75 fish were caught, mostly whiting, pouting and pollack.

Walton Pier has also seen a slowdown in the amount of rays being caught, still dogfish to be caught and the odd bass. Walton Pier Fishing Club fished their final match of the season on the pier. 18 anglers turned out and conditions were far from ideal, with bright conditions and calm seas. Only a few fish were caught but they did manage to find one or two early summer wrasse.

Colchester Sea Angling Club travelled to the Suffolk shores for their River Championships. They fished the Shotley shoreline and once again fish were few and far between with only 5 fish being caught in the whole match.

Heaviest round fish was landed by Mark Sessions with a bass of 2lb 6oz; heaviest flat fish went to Steve Yallop with a flounder 15oz.

The boats this week have also seen a decline in the amount of thornback been caught, although there is a lot of smaller ones now showing, bass are being caught but the bigger fish are still few and far between. Those smoothhounds are still hanging around further out and have still to move this side of the Gunfleet sands in any numbers. We are now seeing those summer mackerel shoals being caught, but at the moment it’s the boats that are venturing further afield that are finding them.