Spring is slowly creeping in and with it brings those long awaited summer species.  Although the air temperatures have been up and down this week with a couple of days of reasonably warm weather followed by much colder wetter windier days, but that’s just a typical April.

We were lucky again at the weekend with lighter winds allowing boats and kayaks to take to the water, rays, dogfish and the odd codling were reported.

Local boat angler Jeremy Taylor headed for the Gunfleet sands and reported that the thornback rays and dogfish were there in force, but he did manage two cod around the 7lb mark on lugworm baits.  He told me that any squid baits were quickly attacked by those rays and dogfish, but worm baits did find a cod or two. The Clacton Boat Club were also taking advantage of the calmer seas at the weekend and a great day was had by all.  Kevin Scrivener and Roy Scrivener fished from their boat “Blippy” and landed five good sized rays plus dogfish and whiting.

Martin Smyth also a Clacton Boat club member landed a dozen thornbacks on his boat and lugworm was the bait. Colchester Sea Angling Club had a trip out of West Mersea, they reported over 200lbs of fish between them. Those early smoothhounds are showing and fish to 6lbs are being caught, those bigger hounds will follow and hermit crab will be the top bait for these marauding species. 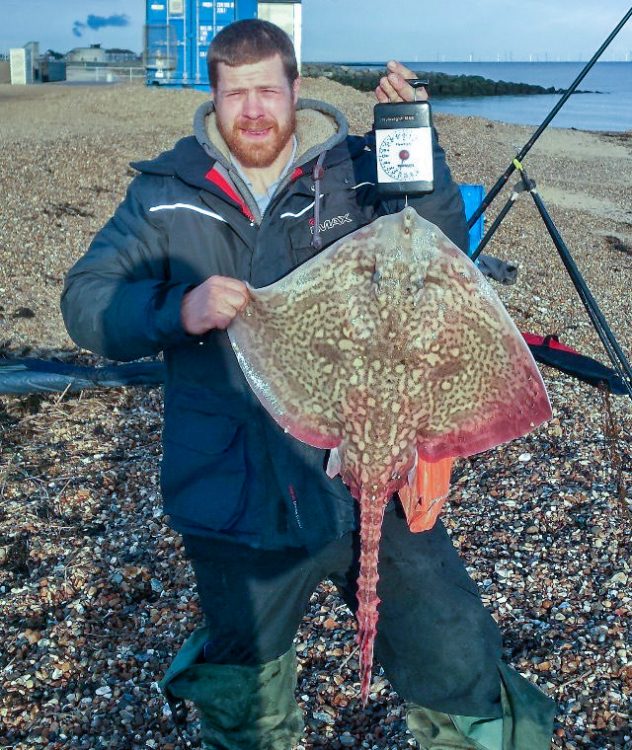 The beaches and piers have also had a reasonable week, with St Osyth beach still being the top venue and anglers are targeting the rays.  Local angler Mark Peters fished a daytime tide here and landed an 11lb ray.  But anglers in general are catching rays and dogfish all along this stretch of beach.  The night tides will produce more fish.

Clacton Pier has seen a few rays and plenty of small whiting, for the best chance of catching a ray it has to be after dark and the last 3 hours of the ebb tide will find this fish feeding.

Once again the Holland beaches have been fishing a bit on the slow side, but lack of anglers is the problem as these beaches will produce some good sized thornback and some early spring bass as well. Walton Pier has seen an influx of dogfish this week, these fish usually feed nocturnally for the pier angler but as the water is so coloured at the moment they are feeding well during daylight hours.

My trip this week was to the local pier where I fished an ebb tide from the lower area by the club hut. I landed a dozen dogfish, a small bass and lots of small whiting, all my fish were caught on peeler crab and ragworm baits. 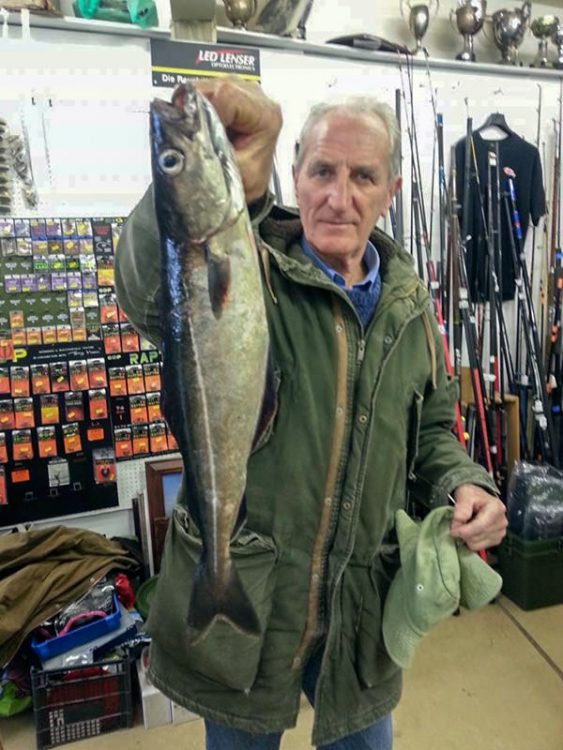 Local angler Mick Smith landed a coalfish here, these fish are usually seen in more northern waters but in recent years we have seen a few landed from the pier and fish up to 2llbs have been landed.