Spring is slowly moving in although with it has brought a cold easterly wind which is dropping temperatures down somewhat. However, calmer weather during the mid-week period saw a few boats launch. It still seems that those codling are few and far between, but a few were caught in the 4lbs range. The spring run of dogfish has started plus plenty of those ever faithful thornback rays.

The beaches and piers have picked up slightly on the bigger tides. The Walton Pier Club fished the top of the local pier for their latest weekend match. 16 anglers turned out and 52 sizable fish were caught. Whiting, flatfish and the odd eel and pouting were caught, plus one rogue codling. Top spot went to Kevin Blackwell with 2¾lb followed by Dean Parker on 2lb 6oz and Fred Parker with 2¼lb. The heaviest fish was Kevin Blackwell’s 12oz codling.

The club reported that during the match a couple of thornback rays were caught by pleasure anglers, so that bodes well for the coming season. Dogfish are now being caught on the night tides, with calamari squid being the favoured bait.

The Walton beaches have been slow this week with just a few flatfish and whiting reported. The Holland and Clacton beaches have seen some rays this week and some small whiting and dabs, but still no codling here. Clacton Pier has reported some bigger rays now being caught with dabs, whiting and a few small bass showing.

Stuart Wallace fished an incoming tide on the Harwich beaches and landed a 2lb codling on a lugworm bait. Stuart has only recently taken up sea fishing and he has already caught a variety of fish including a thornback ray. 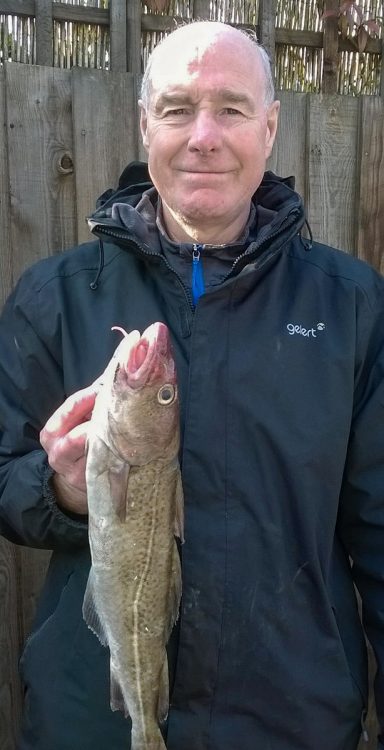 St Osyth beach is still the place to be, with the night tides fishing best. Thornback rays are the mainstay and most anglers are catching fish. The Harwich area is always a good place to head for with Stone Pier and Halfpenny Pier being the top venues. Halfpenny Pier is always a great place to catch those bigger dabs and whiting.

Colchester Sea Angling Club fished the Thorpeness beaches in Suffolk for their latest league match. 10 anglers took part, and fish were quite hard to find although all anglers caught fish. Codling, whiting, dabs, pouting and one or two rockling were weighed in. First place went to Steve Yallop with 4½lb, second spot was Olly Yallop with 3lb 7oz and Phil Buy finished third with 3¼lb. Heaviest fish prize was tied between Ted Gower and Malcolm Wright with a 12oz codling and pouting respectfully.

The places to head for this week will be both Walton and Clacton Pier and St Osyth beach, and the rays should be feeding.

The tides for the weekend are Saturday 8.53am and Sunday 9.53am