An up and down week with a lot of the smaller fish showing, certainly those thornbacks are still there to be caught, but most are feeding after dark. Small bass are now showing quite well from the beaches either side of Walton pier, plus whiting and the odd flounder.

The very high tides during the week seems to have brought in a lot of very small whiting, but still dogfish are being caught quite regularly and rays after dark.

The Walton Pier Club held their latest match here in very wet and windy conditions, 15 hardy anglers ventured onto the stem of the pier and all caught fish. 113 fish were caught and all were on the small side. First place went to Peter Harris with 3lb 7oz, runner-up was Joe Marvell with 3lb 1oz and third placed Fred Parker weighed in 2lb 11oz. The heaviest fish, a dogfish of 1lb 5oz, fell to Andy Grant.

Walton Sea Angling Club also fished the pier for their evening match and they headed for the top of the pier in light winds and calm seas. Dogfish and whiting were the main catch although a thornback ray was lost at the side of the pier. Top spot went to Rob Tuck with a bag of 6lb 11oz, in second place was Bill Paquette and James Everett was third with 5¾lb. The heaviest fish was a 2lb dogfish for Vic Pearce. 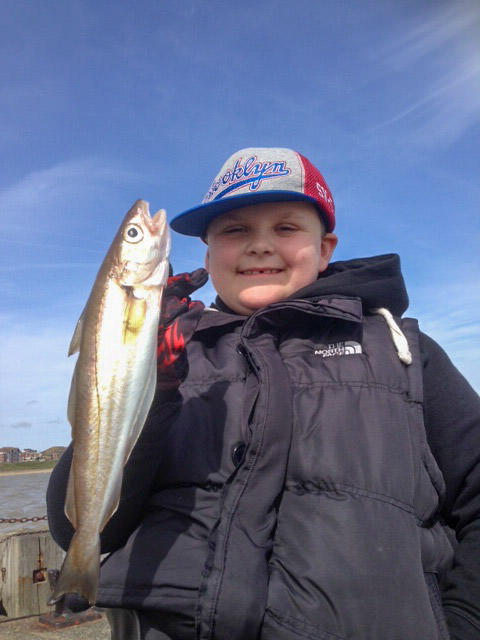 The Frinton beaches have seen one or two early soles showing this week with just a few school bass being caught, still no news of rays being caught, but after dark will be the best time to target these fish. The Holland and Clacton beaches are fishing much the same as last week with small whiting and dogfish, a few rays have been caught on the night tides.

Colchester Sea Angling Club fished the Clacton beaches for their match this week, after reports of bad weather the conditions were actually very reasonable with light winds and no rain. Phil Buy took first place with 5lb 3oz, Mick Bradley was second with 2lb 2oz, and third placed Malcolm Wright had 1lb 15oz. Heaviest fish was tied between Phil Buy and Malcolm Wright, they both landed a 1lb 15oz dogfish.

The Clacton Pier Charity Shield was held at the weekend and it was a sell out for this great charity match and £555 was raised for local charities. Many thanks to Sean Piero and Matt Stewart for organising this great annual match and Phil Buy and Neil Cocks for running the weigh-in.

Reports from anglers fishing Clacton Pier are all saying the same thing, lots of small fish with some thornback rays on the night tides. Chris Hayes fished here and caught dogfish and dabs, he also told me that there were many small fish caught.

The St Osyth beaches have slowed down a bit on the thornback ray front, they are still there to be caught but as the water has warmed up the crabs have started feeding and are stripping angler’s baits in minutes. Danny Allen fished here and he reported that baits were not lasting long enough for rays to find them, especially fish baits. It’s always worth trying squid baits as it is a far tougher bait and wrapped on with elastic cotton should give you 15 minutes between casts.

The high tides for the weekend are Saturday 8.03 am and Sunday 9.24 am