The calm warm conditions that seem to have been with us for a while are now slipping away and we seem to be into more typical winter conditions with blustery winds and cooler temperatures more conducive to winter on their way. This has meant that boats have struggled at times to put to sea, but those that have found some fish feeding. 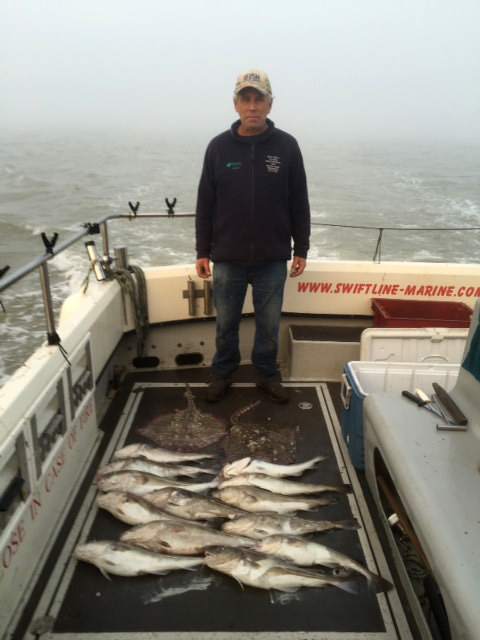 Thornback rays are still with us and it looks like they will be caught for some time yet, until the water temperatures drop drastically. Cod shoals that should be in full force now are a little bit hit and miss and no reports this week of any double figure fish. The whiting shoals have increased massively this week, and seem to be grabbing baits intended for bigger species.

The Mersea-based charter boat Eastern Promise had a trip with David Mynors and Andy Barnes on board. They reported cod to 6lbs and some thornback rays in excess of 10lbs. David told me that they had a problem with seals grabbing hold of fish before they were landed. Sea Watch Charters out of Brightlingsea reported cod to 7lbs and a few rays to 9lbs as well. The herring and sprat shoals that I spoke about last week have increased slightly with more herring showing but are still not causing us major problems.

The beaches and piers this week have seen vast shoals of whiting appear and the night tides have produced so many that it has been a struggle to get through to those bigger codling.

Clacton Sea Angling Club fished their latest evening match on Walton Pier and a staggering 268 fish were caught in the 3 hour match, with most of the catch made up of whiting, plus a few dogfish and the odd codling being caught. First place went to Rob Tuck on 998pts, in second spot was Danny Watson scoring 71pts and Lawrence Martin finished in third with 518pts. The heaviest fish prize went to Danny Watson with a 55cm codling.

There were plenty of fish to be caught once again mainly whiting and a few pouting and dabs.

Clacton Pier has seen whiting and dabs with a few codling in the 3lb range showing. The Clacton and Holland beaches have seen some better catches of codling this week with fish to 4lbs being caught plus still the odd bass showing.

This weekend sees the big Two Day Beach Fishing Match run by Shore Fishing UK. Anglers from all over the country will be descending upon Clacton for this match. Their base will be the Valley Farm Caravan Park, and there are some great prizes up for grabs which include an all expenses’ paid fishing holiday to Iceland. Booking for the match will be on Friday night and Saturday morning before the match. For more information you can contact the Facebook page of Shore Fishing UK.