It has been a week of two halves; during the first part of the week the southerly wind blew making it very difficult for any boats to put to sea, but seemed to benefit the beach angler. The rough sea stirred the sea bed up and the bass were feeding.

I travelled to St Osyth beach in the hope of a bass, and I wasn’t disappointed. I hiked up to the bird sanctuary area with a force 6 southerly blowing into my face, but the trip was worth it. I fished an ebb tide and weed was a problem with wafts of hefty flotsam weighing heavy on the line. As the first of the tide run eased, the bites started with slack liners being the order of the day. Bait was squid and ragworm and to be honest the squid wasn’t working, as all the fish fell to ragworm. I ended the session with three bass to 5lbs plus two very large eels and a bite that nearly took the rod into the sea, but alas the fish was not hooked.

Steven Ruggles also headed for the St Osyth beaches after dark. He managed to find one of those bigger thornback rays. As we head into August we will see more of the bigger rays moving back to the piers and beaches for a few weeks. Meanwhile on the same day on Walton Pier local angler Andy Kirk was also catching bass. He caught the biggest bass reported to me this year from the pier weighing in at 7lb 5oz caught on a bluey bait. 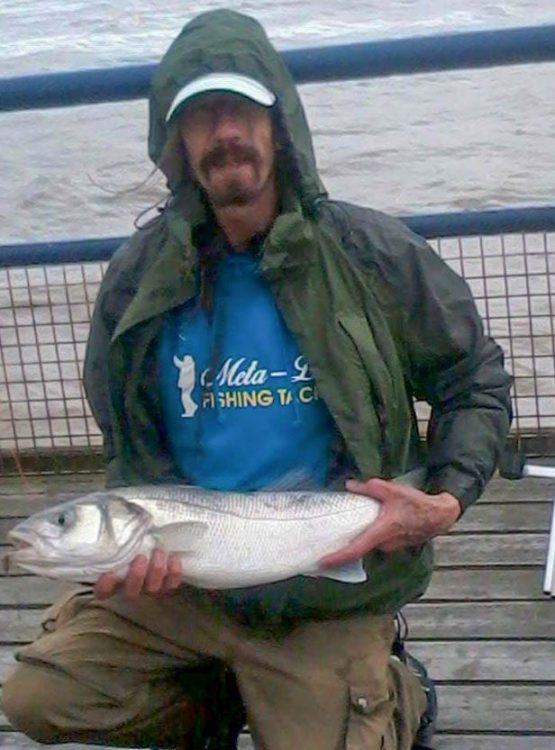 The Walton and Frinton beaches have also had a good week with sole, bass and rays being caught. The Burnt House area has once again produced sole and bass, most on the small side, but lots of bites to be had from this area. Jonathan Wheatley fished an evening tide on the Frinton beaches at Polebarn Lane, and told me that also there were a lot of small fish feeding, but he did manage to catch a bonus thornback ray. Weed was also a problem here in the tide flow.

The Holland beaches has also seen similar catches with school bass and small rays. Clacton Pier is now fishing much better than it was with local angler Peter Rose reporting rays, codling and the odd gurnard being caught. Brian Griggs fished this venue on a night tide and managed to catch one of the bigger thornbacks plus some early season whiting. Young Nat Mills from Clacton also fished here and had a sole and small bass.

Colchester Sea Angling Club held their Summer Sole Only competition on the Aldeburgh beaches. Conditions were good with warm temperatures and light winds. 10 anglers’ fished, but only eight sole were caught. In 1st place was Steve Yallop weighing in with 1lb 1oz, 2nd place went to Chris Mills with 12oz and joint 3rd were Ted Gower and Olly Yallop with 11oz

The second part of the week saw those strong southerly winds abate and calmer seas arrived making it ideal for the boat angler. Dave Hollands and Rocky Rochelle took advantage of this break in the weather and launched from the Gunfleet Sailing club. They reported some good sized sole caught on ragworm baits, plus smoothhounds and rays. The second day saw them launching from the Clacton Boat Club slipway at the Martello and they returned with some early season cod to 7lbs.