Once again the mild weather stays with us, but the autumnal air brings its own problems, that of fog, and at the weekend and we saw poor visibility conditions. But in the age of satellite technology most of the boats were able to put to sea. The Clacton coast line saw many boats heading out and most reported good catches. Clacton Boat Club members set out from their base at the Martello and Dave Hollands told me that they had a good weekend, with codling to 5lbs and some very big thornback rays weighing in excess of 10lbs.

Mike Gray headed for the Holland on Sea coastline in his boat and caught the biggest cod reported to me this year weighing in at a stunning 16¼lbs. Mike caught the cod on a pennel pulley rig and the bait was lugworm and squid. 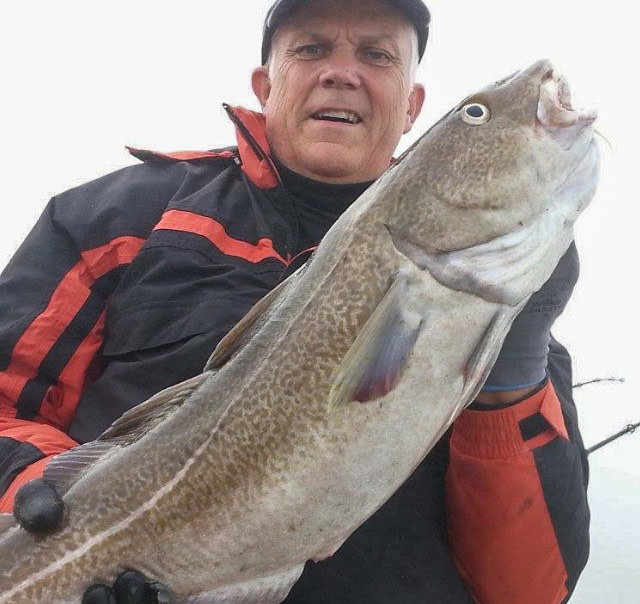 Most of the charter boats came back to port with good size codling and some bigger rays plus the odd bonus smoothhound still to be caught. I have been told by some of the commercial boats that herrings and sprats are now appearing in the Thames Estuary. Its slightly earlier than other years especially as the weather is still so warm, but they will cause a problem for anglers in the next few weeks as those cod will come up in the water and become pre-occupied feeding on these shoals. I will keep you informed on their whereabouts in the coming weeks.

The beaches and piers seem to have had an up and down week, and with some tides those bigger fish have appeared. For some reason other days has just been small fish or very little at all. Clacton Pier has seen some very late autumn rays, plus codling, dogfish and lots of small whiting.

My trip this week was to the Clacton beaches with some friends from Clacton Angling Centre, and to be honest the fishing wasn’t that good. We fished an evening tide and all I managed to catch was five small whiting, although Alan Humm did land a 52cm codling and a very large dogfish. Codling and a few rays plus the odd bass are being caught from the Holland beaches, but once again it’s all a bit hit and miss. The night tides will double your chances of better results.

Walton Sea Angling Club headed for the Kingscliff beaches at Holland for their latest evening match. Conditions were reasonable with calm clear conditions. Once again those codling did not show, so catches were made up with the smaller whiting and pouting. In first spot was Richard Burt with 198 pts, second place went to Rob Tuck with 148 pts and in third was Danny Watson with 80 pts.

Walton Pier has also been following the trend this week with some good days and some not so good. Colchester Sea Angling Club fished a social day mid-week and they told me that there were still lots of small fish being caught with a few better sized codling among them plus the odd ray turning up on some tides.

If you have any photos and fishing reports you can contact me at popplewell1@btinternet.com

The tides for the weekend are Saturday 8.26am and Sunday 9.20am