Shore sport really starts to dominate the Alderney scene at this time of year.

Currently we have black bream to 3lb plus being caught on float fished baits. Fish the way you would for mullet and use very small pieces of squid, mackerel or bread. Mullet are also around in fair numbers with fish to 5lb landed and bigger ones being spotted by observant anglers. Although the two species are often found in close proximity the bream tend to stick to the deeper areas, however they will push up on to shallow marks following any trail of rubby-dubby spooned out for them. Terrific sport can be had and with sessions of up to twenty fish chaos can ensue. Use light tackle but step up the trace line to 12lb.

Mackerel are starting to disappear now, but pollack and garfish are still plentiful. More exciting though, is that the bass are responding well to plugs and soft shads. With fish to 6lb and more caught there is nothing much more rewarding in fishing than at the success of landing a ‘stalked’ and skillfully fished for bass. If that is just way to much expenditure of energy, then take a pound of worms to the shoreline as at night time they fall to this bait.

Also at night using those same worms we have been catching the odd sole and some red mullet. Tipping off with small fish strips or cubes and you increase you chances of gurnard. All these are delightful eating fish. Also at night there have been bull huss to double figures landed and conger to 40lb!

The first of the squid have shown from the breakwater already, the best one was around 4lb and took a small pirk on the bottom of a set of feathers.

Although it is the shore fishing that starts to dominate the boat fishing can still be excellent. Often the weather is too bad to get afloat but given a break in the weather there is some cracking fishing to be had. 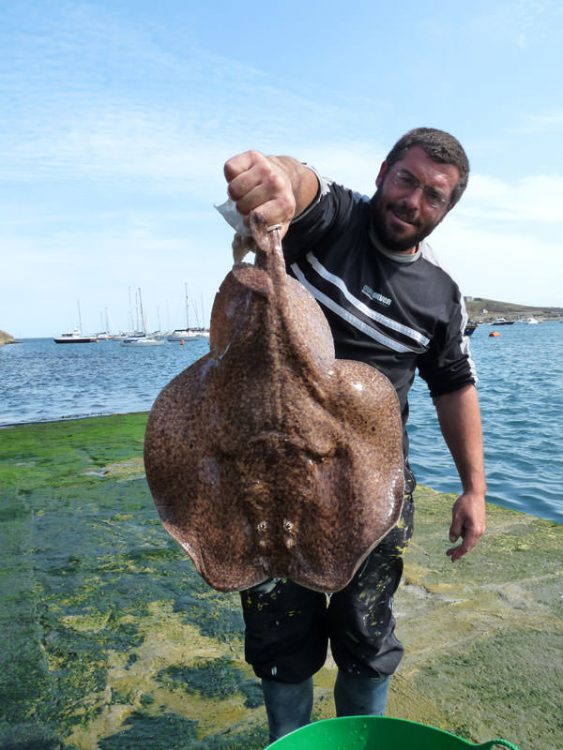 Turbot and brill are around in good numbers and the chance of catching is very realistic. Our local boat Smuggler had a fair bit of success last week with seven to twelve fish on most sessions. Great White was over from Langstone on Shaun’s first ever Alderney trip and he managed to conjure up thirty-two turbot for his crew. One of the younger rods aboard managed the Alderney slam on three consecutive days. That’s a turbot, brill and bass combination. Talking of bass they have at last started to arrive in better numbers for the boats and although they are not in the quantities normally experienced anglers should always be able to find a few. The fishing should continue to improve and if we get a settled spell of weather then jump on a plane and get out with our local boat Smuggler to take advantage. Call me for more details on 01481 824884.

The tope fishing is simply fantastic at present and on the same ground you will find a conger or two and some huss. This week an angler connected with a porbeagle too but needless to say he wasn’t ready for it and the contact was brief. Black bream are plentiful and if anchoring around some sand you will get red mullet and gurnard among other species. You may also be fortunate enough to connect with one of the Island’s massive blonde rays.

Marcus Odoli has had a cracking year’s fishing and he recently landed a 6lb 13oz 12dr marbled electric ray, a fact that he found out once he picked it up and it sent a charge of electricity through his arm. Clever way of identification that!

The fish was kept alive after capture and following weighing for record purposes the fish was returned alive.

The Alderney Festival is around the corner. those of you that have entered don’t forget to get your bait orders in. I’m really looking forward to it this year, the fishing is starting to shape up. If you still want to enter then don’t hesitate to call and I will give you all the details you need to know. I even know of accommodation going spare so no worries there, just give me a call. Thanks to those of you that do take the time to visit, Alderney is reliant on tourism and many people appreciate anglers visiting the island.