Despite being a venue where fishing is normally possible in the lee of the land in almost any weather Alderney anglers have suffered this month from the battering of gale force winds and torrential rain. Usually the lee provides shelter but with winds in excess of 30 mph pushing up a swell round the exposed headlands, boat fishing has proved nigh on impossible.

Most of the better fishing has revolved around plugging for bass with some excellent, if erratic results at times from the shore. Bags up a dozen fish have been recorded; however go back to the same mark the following day and you could be looking at a blank session, that’s Alderney! The majority of the fish landed have been in the 2½ to 6lb bracket with the odd bigger bass to 9lb being taken. The larger specimens have tend to succumb to live baits, or legered squid or mackerel rather than the lures. Plugs that have proved successful recently have been minnow shape and colours vary from blue, grey to the white with red head. Shads are always worth a go too, next month should see more fish caught on soft jellies as opposed to plugs.

Mullet have been shoaling up between the gales, fish to 6lb have been caught but the inclement weather has curtailed most of the mullet angler’s efforts. Black bream too are another species we get on the float, tremendous sport and you only need a loaf of bread for success. To get the best of the bream fishing the weather needs to calm down to allow the fish to shoal up.

Golden greys have been around the harbour area too, with the best fish hitting 2lb mark. This year has been the best year we’ve known for giltheads with fish to 3lb 8oz showing up regularly for the shore angler. Couches bream appear to be showing in better numbers now after a quiet start. Later this month and into December red mullet should show in numbers as should the sole. Eels to 40lb and huss into double figures will provide excellent sport for the angler venturing out after dark.

We’re in to that time of year when most local boats come out of the water and no mainland charters visit the island. Colin has taken his customers out aboard Smuggler of Alderney and has had success with turbot and brill together with a smattering of bass on the soft and the rough ground areas are providing variety with tope, eels, bream and huss among catches. Odd triggerfish have also been showing up from the boats.

Despite the gales, the kayak anglers have been able to sneak out with plugging for bass being particularly productive. Local angler Mark Harding has had up to fifteen fish in a session with pollack, garfish and wrasse also smashing into the lures. 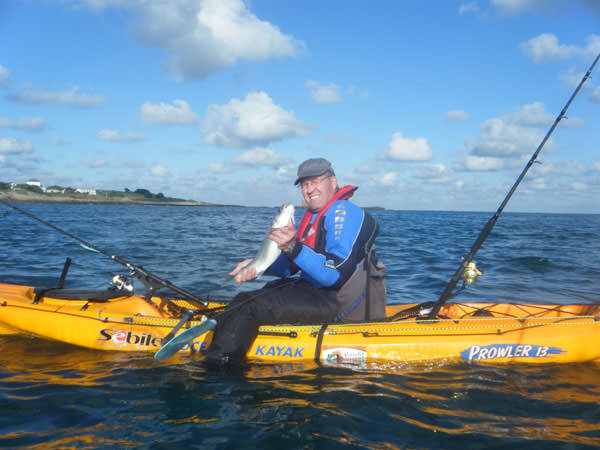