Alderney has experienced some fantastic fishing over the last month. Another cracking season for the turbot with excellent numbers of fish reported together with several fish into the twenties caught and at times released too! We’ve hit the point of the year when numbers do tail off but reasonable catches attainable. Fortunately the brill have swept in behind the turbot with a vengeance and lot o these flats have been landed recently. It looks like the catch and release policy for fish under 16 inches is paying dividends with fish up o 8lb being reported. Now fishing for these two species isn’t everyone’s cup of tea but they are a cracking sight to see as they surface and are lovely to eat. The challenge of drifting the banks to find them is almost primitive as hunter and the hunted. After the initial bite there follows the free spooling of line hoping not to drag the bait away from the gaping jaws.

Tope fishing around these parts this year is once again simply awesome. The sheer quantity of tope is to die for and with most fish falling into the 25lb to 45lb bracket they provide exceptional sport virtually all year. Despite strong tides around Alderney there are marks where they can be fished for them on 12/20lb gear and have the time of your life. The tope fishing this last month has lived up to expectations of the visiting anglers.

On the spring tides the bass fishing is great fun too with the silver beasts smashing in to live eels or mackerel with savage takes. Although the main run of fish is around 2lb to 6lb fish to 12lb are regularly encountered at this time. The wrecks lying within 9 miles of the Island in 300’ of water are at times stuffed full of pollack and even this late in the year anglers have contacted many double figure fish. Cod to 26lb have been landed from the wrecks together with ling in the high twenties. 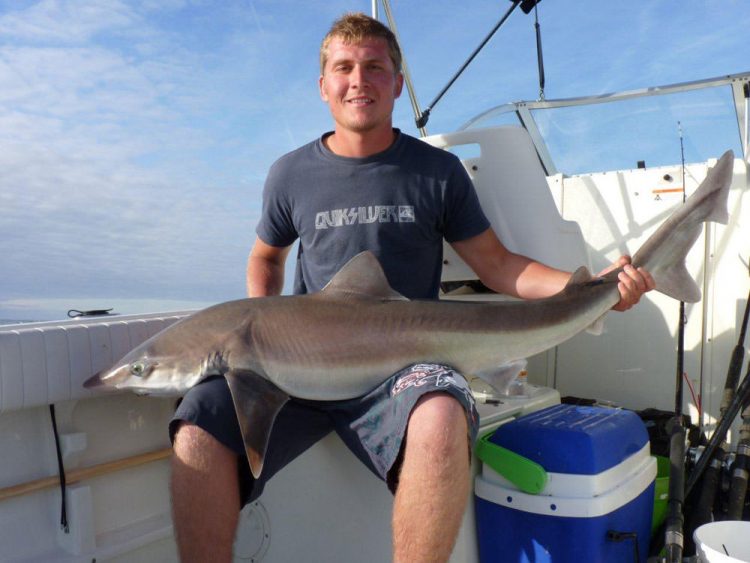 Anchoring on the sandbanks has produced blonde rays to 29lb and undulates hitting 15lb. Ray fishing is relatively untapped around Alderney yet the potential for some massive fish is there. Switching from the sandy marks dropping the pick tight to hard ground reefs and the target will be the tope in conjunction with hungry eels and huss waiting to wrestle your baits away. The species hunter can also look forward to contacting cuckoo wrasse, black bream, red and tub gurnards to add variety and colour to the catches. In addition we have seen the first of the couches sea bream of the summer, with the best so far making 2lb 12oz.

The shore sport is comparatively quiet with the best yet to come as the water temperature peaks towards the end of August and the Island then sees an influx of fish. Bass are generally hard to come by, a few lure caught fish but you can find some monsters in the harbour to double figures. The theory being that they are feeding on the scraps from the visiting yachts and motor boats on the visiting moorings during June. Occasionally there will be thick lipped mullet but for decent sport it’s worth targeting pollack on lures or float fishing for garfish. Plenty of mackerel are being caught on feathers at present. Next month will see sport improve before we hit the peak time mentioned above and then the excellent shore fishing lasts well in to winter.

A reminder that it’s time to sort out flights and accommodation those fishing the festival this year during the week from 22nd to 29th October while there are still some cheap deals available. If anyone needs more details do get in touch, 01481 824884.