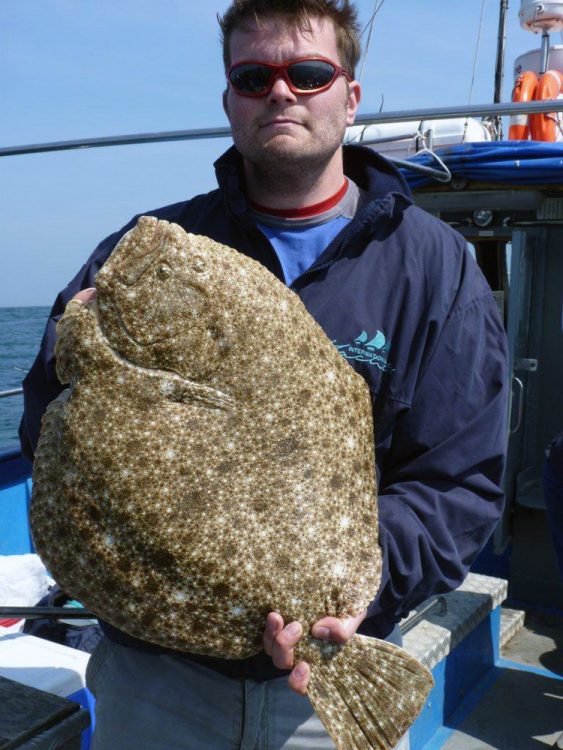 It’s going bananas here on Alderney for the turbot, a great start to the spring for these wonderful flatfish. Last year Alderney fished terrifically well for them and this year is proving even better. It looks like the Island has a sustainable resource in these big flats and it’s good to hear that both local and visiting anglers are acting responsibly and returning fish not needed for immediate consumption. The Recycle Fish campaign started by members of the Weymouth charter fleet, have, in conjunction with Dorset Wildlife Trust, produced an excellent leaflet extolling the virtues of catch and release. The publication stresses the importance of returning fish that are both immature and mature to help protect future stocks. Take a look at the campaign’s website to sign up and get some leaflets sent for display in your club, shop or association.

Plenty of turbot have been landed on the main banks but it is well worth sampling the smaller banks that are too that are often ignored, you could find an untouched mark. Baits are simple, either launce or mackerel cut into long strips on simple one hook flowing rigs. I have heard of several 20lb plus fish falling to visitors including an unconfirmed one today reported to top the scales at 26lb. The brill also have turned up in good numbers with lots of fish around the 9lb mark, an exceptionally high average size for the turbot’s cousin. In the last 10 days at least a dozen have been captured.

One or two bass are starting to show as well but there is little targeted effort for them yet with the flatty fishing being top notch. Almost a month early tub and red gurnards have appeared snaffling the baits intended for turbot, with tubs up to 4lb reported. Away from the banks there has been plenty of tope and with these mini sharks hitting the 60lb mark they are first on many an angler’s list of “must catch” fish.

Wrecking has thrown up some good pollack to 16lb with the wrecks in the Hurd Deeps your best bet as the area is currently clear of the May water bloom. Cod and ling are also showing with several cod in the twenties being boated. The new Redgill Evo lure has been accounting for a fair proportion of the fish.

With the odd exception shore sport is comparatively quiet with garfish, mackerel and pollack to 4lb forming the mainstay of the catches. Although not up to the boat standards the fishing is still great with again good numbers of fish around. Some jumbo mackerel have arrived on the scene and, together with providing great sport on the light gear, make great eating. The occasional herring has also been landed by anglers feathering for mackerel. Pollack are generally easy to catch with fish falling to lures on a regular basis.

Local anglers have been putting in early morning shifts before work to target bass. They have been rising at dawn to patrol the sandy coves with Savage Gear sandeels and hooking up with fish to 9lb. This is unusual, at this time of year, to hear of so many bass so close to shore but the pair of adventurous anglers is reaping the benefits of the early alarm calls. Up to 6 fish per rod have been taken during their short sessions with many others failing to follow through on their initial interest in the lures.

In general very little in the way of mullet have shown of late, but young Zac Eastwood managed to snag a beauty of 8lb 13oz. Zac is becoming renowned for catching good sized mullet; so much so his Dad is helping hold the fish in the picture just to get near to a specimen. Other species could be encountered but with the shorter nights few anglers are bothering to set up for ray, eels, and tope.

The annual Alderney Angling Festival is coming around again and if you’ve not already done so you’ll need to think about sorting flights and accommodation, the dates for this year’s Festival are October 22nd to 29th. The Fisheries Consultation for Alderney has now closed and everyone is now awaiting the outcome to see how much, if any, protection the Island’s fishery receives.