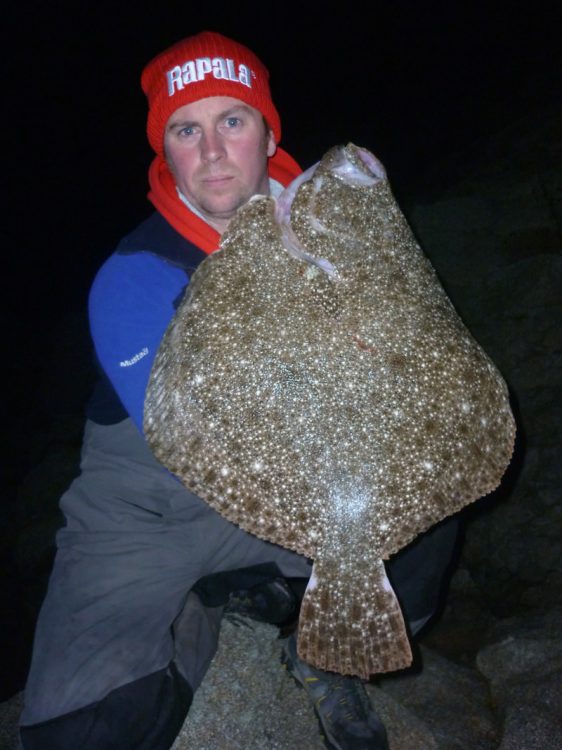 After the relatively poor fishing at the turn of the year it’s good to be able to report that things have picked up here in Alderney over the past four weeks. Normally, like most of the UK things quieten down here on the island during February and March but it’s good to report on the recent improvement in the sport. The story of the month is that the Alderney Shore record for a turbot has fallen. Dale Britton was the captor of the brilliant 9lb 7oz 12dr flattie which took him by surprise when fishing for small eyed rays at night. The turbot is an absolutely superb fish, which smashed the previous record by around 5lb and is a fitting reward for regular visitor Dale. Many winter anglers have been turning their backs on the island due to the intense inshore netting that has escalated over the last four years but Dale and his mates had some terrific fishing during their visit.

The guys had plenty of bass on worm and squid baits with the latter accounting for the bigger fish; the best topping out at 8lb 10oz landed by visiting Bristol angler Dean Morgan. The secret seem to be that if you want quantity then use either lugworm or ragworm but the quality fish are definitely falling for bigger squid and mackerel baits. Dale added to his quality fish list with a bull huss of 10lb 2oz.

We have had a smattering of late arriving bream around the island with fish to 3lb coming to bottom baits. Some sessions are extremely hectic with double hook ups snaffling baits on pennel rigs. Other species showing at night have been smoothounds, codling and red mullet but apart from the bass no great numbers of any one species. Not a lot of day time fishing has been carried out of late but a few welcome plaice have been caught. The mullet are very much hit and miss, one day they will be on a mark in massive numbers and the next the venue will be barren.

Boat fishing is pretty much non-existent at the moment but hopefully we’ll be able to get wrecking this month for pollack, ling and the odd cod. We’ll also sample the first of the season’s flatfish on the offshore sand banks where turbot will be the target.

The Fisheries Consultation closure is ever closer with a dead line set for March. I do believe our government will strike a fair balance and compromise between those that use our fisheries, the parties involved and of course the fish stocks themselves. That couldn’t happen without the support and input that has been received.

In the meantime thanks to those of you that do find your way here, we do have some good fishing that can exceed that found around the rest of the UK. The amazing variety and of course the availability of the specimen fish previously mentioned mean that Alderney is always worth a visit.