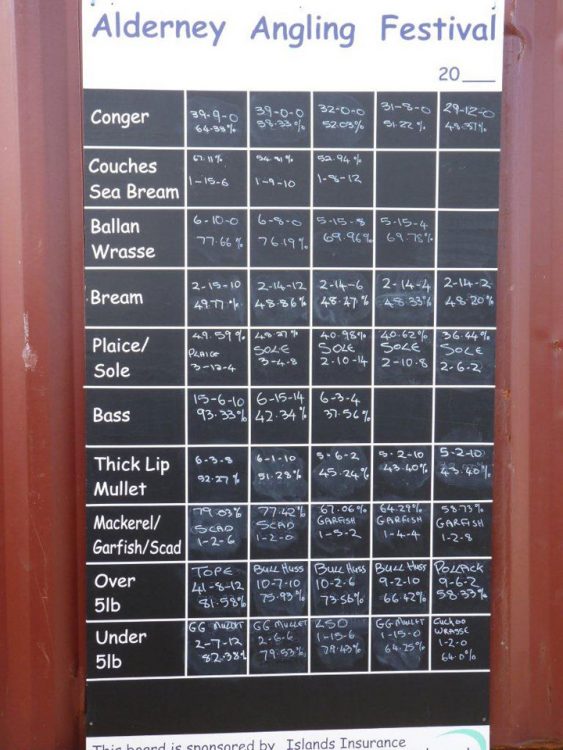 What an exciting week of fish, fishing, craic, laughs and sleepless nights. The Festival is an event of old friend re-unions, rivalries being re-established and new entrants experiencing an unmatched camaraderie.

Thanks to all of you that visit and make the event the success that it is each year. 2011 saw 107 enter, up on last year, and it was great to see some new faces who will hopefully return in the future.

The Festival was set up 26 years ago by Legend Lure owner Roddy Hays, now based in Florida and it has continued to be a focus of the sea angling calendar since its inception. Anglers come from as far north as Lancashire and many journey from the south coast of the UK, Jersey and Guernsey. The event is focussed around conservation with eight species categories and two weight bands which are updated daily on the now famous chalkboard. Each species of fish has a qualifying weight before it can go on the board. For example to qualify for ballan wrasse the weight must exceed 5¾lb. Once the five board spaces for a category have been filled then beating the lowest weight becomes the target. This allows the smaller fish to be safely returned to preserve the Island stocks. Prizes are awarded for the top 5 fish remaining on the board with over £5,000 paid out in cash and prizes. It is a weeklong event and you fish the hours you want to fish on a rover basis. Its starts midday on the first Saturday and finishes with a crate of beer seven days later at the same time.

One of the more unusual things that Mark experienced during the week was seeing a pout landed by Gary Maurice. From the bone crunching, crescent shaped bite it had obviously been subject to the attentions of a tope or porbeagle shark. Although the ratchet was set to free-spool if the bait was picked up and despite the rods being watched no bite was detected before the sorry pouting was retrieved. This was in an area off the back of the Breakwater wall where porbeagles are known to pass through.

Mark always likes to select his fish of the festival; this year it could well have been the 15lb bass caught by Rick Ball which was a phenomenal fish but Mark plumped for Derek Spears’ cracking 41lb tope landed in adverse conditions after a terrific fight. Chris Tozer caught one of the best looking fishes of the festival, an undulate ray which Chris kept it alive in a rock pool for a couple of hours in order so he could return it after weighing. 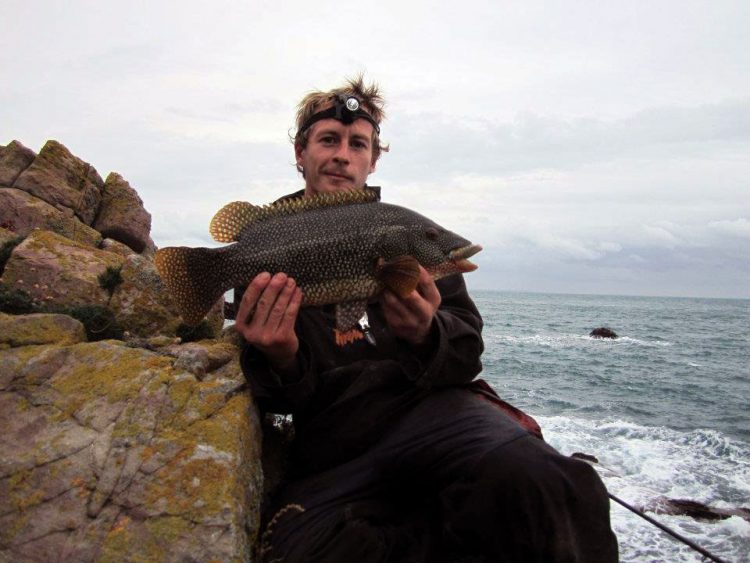 A big thank-you from everyone who attended goes to Dicky Smith for running the show. Dick took the Festival organising on his own shoulders this year which was thoroughly unfair, but he managed to pull the rabbit out the hat so too speak, cracking job Dick and thanks a lot. Thanks too to all the anglers coming in the shop and spending their hard earned cash, much appreciated by all on Alderney and many thanks to those of you acknowledging to Fieona for the work she does as well. Thanks too our sponsors and prize donators as well, without whom it would be extremely difficult to run the festival: States of Alderney, Aurigny, Quayside, St. Sampsons, Le Cocqs of Alderney, Channel Seaways, Nellie Grays, ABU/Pure Fishing, Huelin Renoeuf, Swift Tackle/Sakuma, Daiwa, Boat Exchange, Guernsey, Tackle Direct 2U, Guernsey, Shimano, Mick’s Fishing, Guernsey and Leeda.

And there you have it. Dates for next year are the 13th October through to 20th October, get the flights booked up early to get the best prices and book your accommodation now so not to be disappointed. Well done to the winners, tremendous effort and see everyone next year if we don’t see you before then.