It seems as if that autumn clock has been switched on, bang on time! Almost overnight shoals of autumnal whiting have appeared for both beach, pier and boat angler. Our beaches have been invaded with these voracious feeding species and after dark is the time to target them. They are a great favourite for the competition beach and pier angler as they can add big weights to any match.

Dogfish have also made a return although most are being caught after dark as the sea is still very clear during daylight hours.

Local angler James Hendry headed for his local Holland on Sea beaches in the hope of fishing for sole on an evening tide. James reported that it was a whiting every cast although he did catch bass and pouting close in. Weed has been a bit of a problem this week for shore anglers, mostly when the tide is running hard on the ebb tides, this has probably been caused by the light on-shore winds.

Clacton Pier has had a slower week with just the odd thornback ray, but once again evening tides are producing more. Whiting and dogfish are also prolific here after dark. 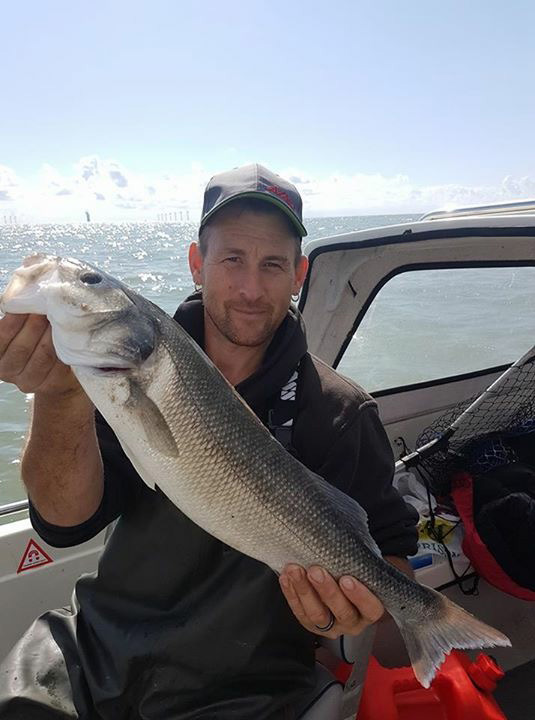 Martyn Smyth with his 6lb bass on a squid bait

The Frinton beaches have been quiet this week with just the odd small sole and school bass. The Walton beaches are only showing small bass, eels and the odd sole. Walton Pier has seen a few ray from the top of the pier; whiting, dogfish and sole are showing well after dark. Sole are being caught on the lower part of the pier on ragworm baits at close range.

Those mackerel shoals that I reported on last week seem to have dispersed with now only the odd mackerel being caught. 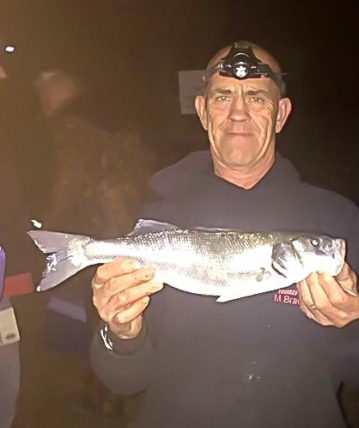 Colchester Sea Angling Club held round nine of their Annual Sea League on the Dunwich beaches, 12 anglers fished 7pm till midnight on a flooding tide. For most anglers the fishing was difficult with fish few and far between, but they did manage to catch soles, eels, whiting, bass and a couple of small smooth-hounds.

Overall winner was Mick Bradley with 5lb 3oz including the heaviest round fish, a bass of 2lb 1oz. Second place went to Martin Close with a mixed bag for 3lb 7oz and he also won the heaviest flat fish prize with a sole weighing 15oz. Third spot went to Mark Sessions with 1lb 15oz.

The boats have had a varied week, once again thornback rays, smooth-hounds and bass have been the mainstay although it has been slightly quieter than last week .

Clacton Boat Club member Martin Smyth and Kevin Scrivener fished a mile off the coast. They caught bass on feathers close to the local pier (all fish were returned) and high-water saw them catching thornback ray on herring baits. Martin landed a cracking bass weighing 6lbs on the ebb tide, with squid as the bait.

September usually heralds the first of the cod shoals moving inshore, although as yet there are very few reports of any significant catches from any venues.

The high tides for the weekend are Saturday 14.31pm and Sunday 15.07pm