Summer has returned, with temperatures in the mid 20’s and clear blue seas; the fishing this week has been the best so far for anglers on the Essex coast.

Those hard-fighting smoothhounds have turned up in force for the pier anglers as I had predicted a couple of weeks ago, these small sharks can grow to in excess of 20lbs and can really test rods and tackle!

My trip this week was to fish an evening tide on Walton Pier and to be honest it was probably the best fishing session I have had in my long fishing career. I found a large pack of smoothhounds feeding and using peeler crab baits the hounds were ravenous. I landed nine hounds on the last of the ebb tide and another five on the first of the flood, the heaviest weighed in at 14lbs. 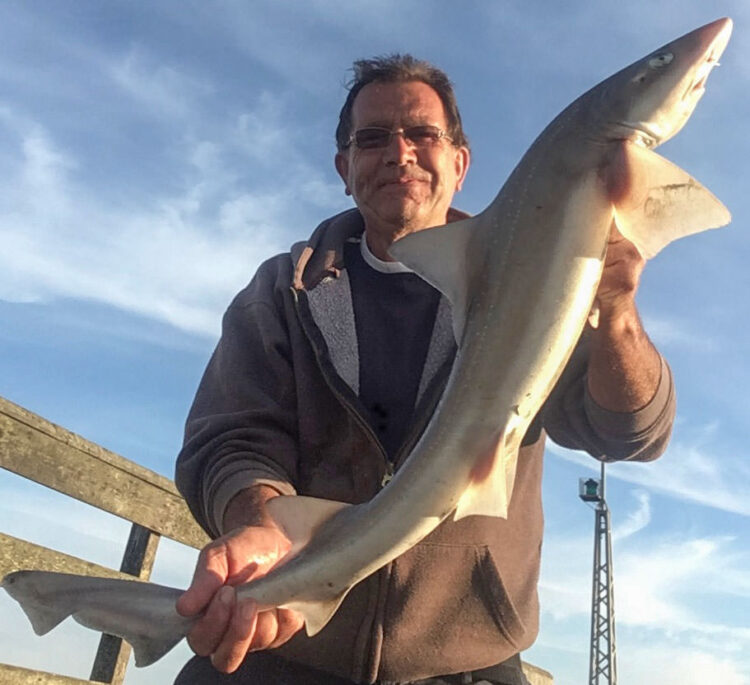 John with one of his hounds

Michael Simpson also fished here during the week and caught 7 smoothies to 7lb 8oz plus a codling and three thornback rays.

Walton-on-the-Naze Sea Angling Club fished their first match since the lockdown on Walton Pier. They were greeted with warm and calm conditions, and 14 anglers fished the stem of the pier in the hope of a thornback ray or hound. Sadly, the bigger fish were hard to find, but they did catch a mixture of smaller fish.

Top angler on the night was Rob Tuck with 116 points, second place went to Lawrence Chisnall with 112 points and Vic Pearce finished third on 54 points.

The Walton beaches have also fished well after dark with sole now feeding just a few yards from promenade. Bass are being caught from the beaches around the local Pier and also from the Burnt House area to the right of the pier.

The Frinton beaches have been fairly quiet but the late evening tides, when the tourists have gone home, will fish best for bass and thornback ray.

Holland on Sea is also an evening tide venue, with bright sunshine during the day most self- respecting fish stay out in deeper waters until the sun goes down. Some good size bass have been caught along with sole and the odd thornback ray.

Clacton Pier is now open fully for fishing and anglers can fish both day and night with the appropriate day ticket or season permit. 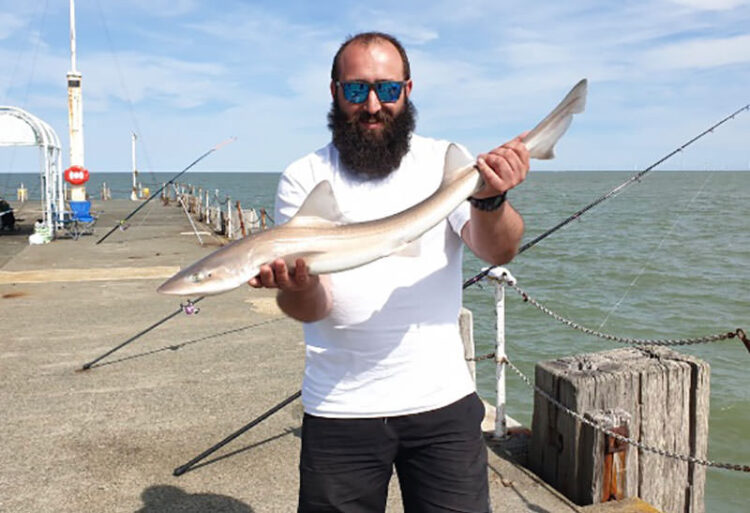 Kris Cherneav with his 6lb smoothhound caught from Clacton Pier

Kris Cherneav fished a day-time tide here and landed a 6lb smooth hound along with four thornback ray. The evening tides here are seeing sole and bass being caught.

St Osyth beach has been very quiet for the last couple of weeks and once again high temperatures and bright sunshine will keep any self-respecting fish in deeper waters, but after dark there is always a chance of stingray and thornies.

Boat anglers have also been catching plenty of fish and once again hounds are top of the list with fish into double figures being caught.

Alan Tipple and Sandie Davis launched their boat from the Gunfleet Boat Club ramp and fished nine miles off the coast. They were rewarded with smoothhounds to 10lbs and bass to 4lbs. Dave Vennells also fished this area and caught bass to 6lbs and a personal best hound of 10lb 5oz.

Tim Bird fished from his own boat just off the Frinton coast and also caught some decent size smoothies along with 10 thornback rays. 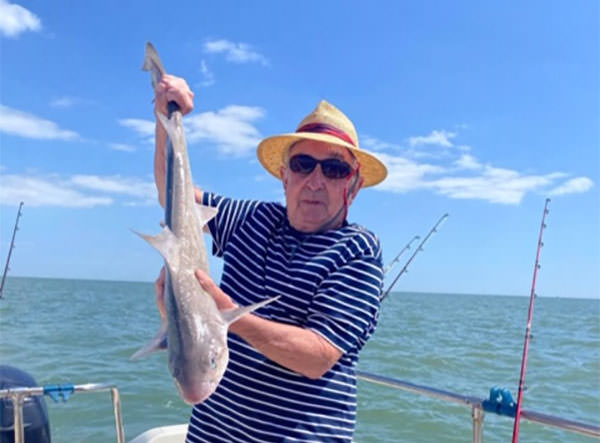 Chris Hits The Hounds From The Waters Edge